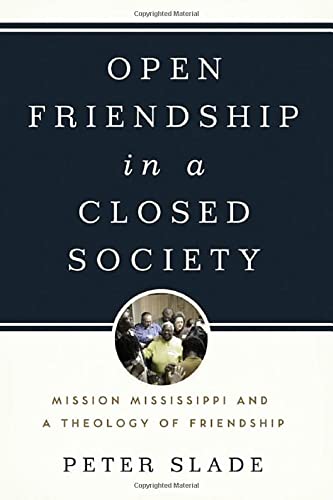 Open Friendship in a Closed Society

A new perspective on racial reconciliation in Mississippi.

Mississippi's history often seems to suggest that America's racial problems have their deepest roots in its fertile patch of Deep South soil. From the 1880s to the 1950s, more black Americans were lynched in Mississippi than in any other southern state. During the Civil Rights era, the state produced a steady stream of horrific murders, and today it has the nation's poorest African American population. Something in the Mississippi loam also nourishes a bumper crop of believers both black and white, and nobody was surprised when a recent Gallup poll named the magnolia state the most religious in the country.

This makes Mississippi an unlikely but perfect setting for a book on racial reconciliation. In Open Friendship in a Closed Society: Mission Mississippi and a Theology of Friendship, Peter Slade braids together theology, history, and sociology in an examination of a remarkable organization working to reconcile black and white Christians in Mississippi. Slade began the book as part of the Project on Lived Theology at the University of Virginia, and he shares this scholarly community's concern with how theological beliefs shape social action. His book is a meditation, grounded in the particulars of place and time, on the relationship between justice and reconciliation in the body of Christ.

Mission Mississippi today, according to the publisher's description, is the "largest interracial ecumenical church-based racial reconciliation group in the United States." The organization pursues its goal through a series of church partnerships and biweekly prayer breakfasts held throughout Jackson, Mississippi. Headed by African American Dolphus Weary, Mission Mississippi is run by a biracial board of directors, including members from some of Jackson's most theologically conservative white congregations. The organization had its beginnings in a series of unlikely alliances between Jackson's white business community and some of its more prominent black clergy, such as John Perkins, whose Voice of Calvary Ministry has been working toward community renewal in Jackson for decades. After a series of high-profile but only marginally successful interracial revivals in the early 1990s, Mission Mississippi settled into its current model fostering interpersonal relationships while carefully avoiding engaging any social or political issues.

Slade's book is in one sense a theological response to a sociological argument. In Divided by Faith (2001), sociologists Michael O. Emerson and Christian Smith argued that the interpersonal approach to racial reconciliation exemplified by Mission Mississippi is ineffective at best, and at worst actively frustrates the demands of justice through an individualistic focus on personal relationships that conceals the systemic nature of racial injustice. Slade builds an effective and clear-eyed theological counterargument using the theologies of Jürgen Moltmann (on friendship) and Miroslav Volf (on reconciliation). In the process, Slade treats the reader to skillful snapshots of disparate times, places, people, and theologies that all converge in his analysis of Mission Mississippi.

Throughout the book, Slade is concerned to bridge the chasm that divides the "lecture hall from the sanctuary," or the printed words of academic theologians from the spoken experiences of the everyday believers he interviewed. He does this in part by narrating their theologies alongside their life stories, showing the intimate connection between the material and cognitive facets of a life—the "lived" quality of the most academic theology. In Moltmann's case, this means that we travel through the trials of his imprisonment as a POW in World War II to experience and understand his conviction of Christ's costly "open friendship" toward those he had come to save.

The nature of this friendship is to be found in Christ's words to his disciples: "No one has greater love than this, to lay down one's life for one's friends." The essential quality that allows such friendship is hope, based on the "eschatological horizon of the resurrection of the dead."

In contrast to the ideal of open friendship, Moltmann described the "closed and introverted" person or society—fearful of the future, interested only in maintaining the present. This of course is a perfect description of the racial regime in Mississippi in the mid-20th century. Indeed, University of Mississippi professor James Silver used this very phrase to describe the state in his Mississippi: The Closed Society (1964), and Slade uses Silver's story to cement the parallel.

Where Michael Emerson and Christian Smith blamed a generalized evangelical individualism for the reticence of organizations like Mission Mississippi to address issues of systemic racial injustice, Slade delves deep into the racial past of southern Presbyterianism to find what he considers the historical taproot of this restraint. He finds its origins in the doctrine of the "spirituality of the church" elaborated by South Carolina Presbyterian James Henley Thornwell during his denomination's conflict over slavery in the mid-19th century. Thornwell argued that the church was an essentially spiritual institution that had no business making pronouncements on temporal issues such as slavery, which should be left to the judicial and legislative branches of society. Thornwell's neutrality doctrine was, of course, designed to blunt the anti-slavery arguments being made by many in the northern wings of the church.

Slade traces the doctrine's continuing influence in southern Presbyterianism into the Civil Rights era, when it was used to condemn denominational involvement in social issues, especially civil rights. Slade calls the doctrine "a sophisticated theological resistance to systemic change; it is not an innocent doctrine misused." (Slade fails to mention, though, that a version of the doctrine also underlies the ongoing reaction in many conservative churches against the perceived political excesses of the Religious Right.) Today, First Presbyterian members like Lee Paris are devoted to Mission Mississippi and its cause, but they continue to maintain the church's exclusively spiritual mission. As Paris told Slade, "For me justice is God's job and the laws of our land's job."

In order to ease the participation of churches like First Presbyterian and white Mississippians in general, Mission Mississippi employs what Slade calls a "pragmatic strategy" of not engaging in social or political issues. For whites in the organization, Slade writes, this position reflects a desire to "keep their personal religion free from the taint of the social gospel," while for blacks it reflects a "theological statement of hope" that a relational approach will "mobilize the economic and social capital of the white church" and precipitate broader change. Mission Mississippi, as its director Dolphus Weary says, is "Reconciliation 101."

But can this approach change Mississippi? What role does justice play in the process of reconciliation? Here at last we get to the heart of the book and of Slade's response to the sociologists. In a remarkable couple of chapters, Slade evaluates the biweekly prayer breakfasts held by Mission Mississippi using the model of reconciliation developed by theologian Miroslav Volf. True Christian forgiveness, argued Volf, cannot happen either outside justice (by ignoring past sins) or only after justice (by demanding justice before forgiveness). Instead, Volf, whose theology was shaped by living through the Yugoslav conflicts of the 1990s, argued that Christian forgiveness begins with the "will to embrace" the other. Through a series of interviews with participants, Slade argues persuasively that the personal sharing and intercessory prayer of black and white Christians at these breakfasts fits this description and leads to what Volf called "double vision," or the ability to see with another's eyes—a crucial first step on the path to both reconciliation and justice. Slade quotes one white participant:

I was with a couple of black men and maybe a white man. And we all shared something we would like the group to pray about. And the black man next to me, the way he prayed—it was about my daughter—was so powerful …. To have someone like that just pray like they really cared, just intensely. Like praying the wallpaper off the walls for someone they didn't know, my daughter. For me it was just … you can't help but when you have had someone pray for you like that, there is a bond.

Slade concludes that participants in Mission Mississippi practice a genuine version of the open friendship of Christ that represents an important, if still inchoate, step on the path to reconciliation and justice in Mississippi. He argues for this model of reconciliation on pragmatic grounds, dismissing the ideal of interracial congregations advocated by Smith and Emerson as "not a realistic starting point for transforming the Church in America today" and citing their own research to prove his point. Nevertheless, Slade is frank in his evaluation of what he considers serious shortcomings, and at the end of the book he enjoins Mission Mississippi's leadership to "relax its dogmatic insistence on the separation between spiritual and social spheres."

In Slade's view, there is evidence that this may already be happening. In 2005, Hurricane Katrina devastated the Gulf Coast, exposing the depth and persistence of racial inequities in America in a way that beggared dispute. In the wake of the disaster, Mission Mississippi used its exceptional network of white and black churches throughout Mississippi to coordinate aid, hosted a weekly conference call between local churches and relief organizations, and continues to work with evacuees. FEMA listed Mission Mississippi as one of the main organizations helping to coordinate relief efforts.

This is encouraging, but at times one can't help wondering if Slade's precise theological reasoning is just a little too neat to be respected by the untidy forces of history and human nature. The past certainly provides little encouragement. After all, as historians like Randy Sparks have documented, the interracial churches Slade dismisses as an unrealistic starting point for racial reconciliation once existed in Mississippi. In the same era in which James Henley Thornwell forged his otherworldly vision of the church's mission, black and white southerners worshipped together in significant numbers throughout Mississippi and the South. The degree to which southern religious life under slavery was characterized by both injustice and intimacy between races is difficult for us to comprehend today, but it stands as an enduring testament to the complexity and frailty of human nature, as well as to the fact that the relative power of social groups shapes even the most intimate interactions of their members.

Histories like this have led at least one theologian to question the link between the kind of personal transformations that Slade chronicles and any hoped for institutional or societal change. Reinhold Niebuhr directed his early book Moral Man and Immoral Society (1932) against those who placed their hopes for social justice in the cumulative increase of individual moral or religious awareness (his original target was John Dewey). There is no connection, Niebuhr argued, between individual morality and group morality. As individuals, he argued, we may be swayed to act justly towards other individuals by rational argument, moral insight, or religious conviction, but groups are impervious to such forces on account of their blind self interest and "collective egoism." Niebuhr argued that the relationships between groups "must therefore always be predominantly political rather than ethical," and that "all social cooperation on a larger scale than the most intimate social group requires a measure of coercion." This argument finds its way into Slade's text through a critique of Mission Mississippi by John Perkins, who, according to Slade, "insisted that Mission Mississippi does not understand that individuals cannot change institutions, only institutions change institutions."

Those who prefer instead to remain hopeful will find ample reason to do so in Slade's book. Slade's measured hopes for Mission Mississippi spring from a belief in the transformative power of intercessory prayer in the body of Christ. His theological arguments and historical observations are tightly woven and winsomely written, and the mix of pragmatism and hope that permeates the book makes it not only wise but also useful, a welcome quality considering that Mississippi's problems are not as distinctive as its history suggests.

Robert Elder is a PhD candidate in history at Emory University.