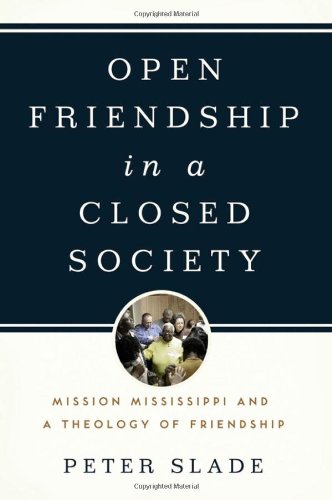 Open Friendship in a Closed Society

A new perspective on racial reconciliation in Mississippi.

Mississippi's history often seems to suggest that America's racial problems have their deepest roots in its fertile patch of Deep South soil. From the 1880s to the 1950s, more black Americans were lynched in Mississippi than in any other southern state. During the Civil Rights era, the state produced a steady stream of horrific murders, and today it has the nation's poorest African American population. Something in the Mississippi loam also nourishes a bumper crop of believers both black and white, and nobody was surprised when a recent Gallup poll named the magnolia state the most religious in the country.

This makes Mississippi an unlikely but perfect setting for a book on racial reconciliation. In Open Friendship in a Closed Society: Mission Mississippi and a Theology of Friendship, Peter Slade braids together theology, history, and sociology in an examination of a remarkable organization working to reconcile black and white Christians in Mississippi. Slade began the book as part of the Project on Lived Theology at the University of Virginia, and he shares this scholarly community's concern with how theological beliefs shape social action. His book is a meditation, grounded in the particulars of place and time, on the relationship between justice and reconciliation in the body of Christ.

Mission Mississippi today, according to the publisher's description, is the "largest interracial ecumenical church-based racial reconciliation group in the United States." The organization pursues its goal through a series of church partnerships and biweekly prayer breakfasts held throughout Jackson, Mississippi. Headed by African American Dolphus Weary, Mission Mississippi is run by a biracial board of directors, including members from some of Jackson's most theologically conservative white congregations. The organization had its beginnings in a series of unlikely alliances between Jackson's white business community and some of its more prominent black clergy, such as John Perkins, whose Voice of Calvary Ministry has been working toward community renewal in Jackson for decades. After a series of high-profile but only marginally successful interracial revivals in the early 1990s, Mission Mississippi settled into its current model fostering interpersonal relationships while carefully avoiding engaging any social or political issues.

Slade's book is in one sense a theological response to a sociological argument. In Divided by Faith (2001), sociologists Michael O. Emerson and Christian Smith argued that the interpersonal approach to racial reconciliation exemplified by Mission Mississippi is ineffective at best, and at worst actively frustrates the demands of justice through an individualistic focus on personal relationships that conceals the systemic nature of racial injustice. Slade builds an effective and clear-eyed theological counterargument using the theologies of Jürgen Moltmann (on friendship) and Miroslav Volf (on reconciliation). In the process, Slade treats the reader to skillful snapshots of disparate times, places, people, and theologies that all converge in his analysis of Mission Mississippi.

Throughout the book, Slade is concerned to bridge the chasm that divides the "lecture hall from the sanctuary," or the printed words of academic theologians from the spoken experiences of the everyday believers he interviewed. He does this in part by narrating their theologies alongside their life stories, showing the intimate connection between the material and cognitive facets of a life—the "lived" quality of the most academic theology. In Moltmann's case, this means that we travel through the trials of his imprisonment as a POW in World War II to experience and understand his conviction of Christ's costly "open friendship" toward those he had come to save.

The nature of this friendship is to be found in Christ's words to his disciples: "No one has greater love than this, to lay down one's life for one's friends." The essential quality that allows such friendship is hope, based on the "eschatological horizon of the resurrection of the dead."

In contrast to the ideal of open friendship, Moltmann described the "closed and introverted" person or society—fearful of the future, interested only in maintaining the present. This of course is a perfect description of the racial regime in Mississippi in the mid-20th century. Indeed, University of Mississippi professor James Silver used this very phrase to describe the state in his Mississippi: The Closed Society (1964), and Slade uses Silver's story to cement the parallel.