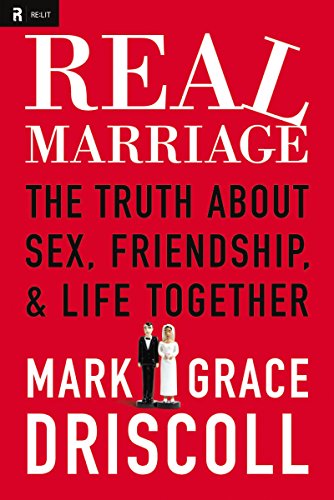 Advice from the Driscolls.
January/February 2012

Here's the good news: Mark and Grace Driscoll have written a perfectly adequate book on marriage. This is not a small accomplishment. Scores of truly dreadful books populate the self-help section of your local bookstore; Real Marriage: The Truth About Sex, Friendship, & Life Together is not one of them. Yes, it is marked by some of the most annoying idiosyncrasies of Christian self-help literature: theological jargon, silly personifications ("Success-and-Status Stewart" and "Good-Time Gary" are not ideal husbands), and too many exclamation points. But it offers plenty of good ideas for couples. Real Marriage suggests that spouses talk to each other about their emotions, do nice things for each other, cultivate friendship, plan date nights. It points out that sex within marriage is a good thing. It recommends forgiveness, kindness, patience. It gives pretty decent advice. It does not "send shock waves throughout the evangelical world," as Thomas Nelson promises in the accompanying press release.

First, the book. It is unabashedly conservative and complementarian. Seattle pastor Mark Driscoll, founder of Mars Hill Church, falls into the "soft patriarchy" camp, a phrase that he himself uses. His definition of manliness is surprisingly Southern; in the very first chapter, he explains that he came back to the church as a young man because he finally found a congregation with a manly pastor (he had been in the military and bow-hunted) and masculine men (farmers, hunters, and one guy with 13 children). Men are to be tough in business (there will be no questioning of American economic norms in this book) and tender with women and children, who are weak. Wives are "crystal goblets," beautiful and fragile; men are "thermoses," strong and protective. Men are to lead, women to submit, although submission is carefully redefined as "respect" and leadership as "taking responsibility." Men, Driscoll says, are meant to be breadwinners. Always. "Admittedly," he writes,

a wife working before kids are born, a wife who finds a way to make money from home or without neglecting her first God-given responsibilities of Christian wife and mother is acceptable. But men, you should make money. You should feed your family. One study found that "American wives, even wives who hold more feminist views about working women and the division of household tasks, are typically happier when their husbands earn 68% or more of the household income."

The quote is from sociologist W. Bradford Wilcox, whose research Driscoll leans heavily upon; he is footnoted more often than any other source in Real Marriage.

Like hundreds of evangelical marriage books, Real Marriage uses the Bible to shore up this complementarian point of view. And like thousands of evangelical self-help authors, the Driscolls toss in some highly questionable exegesis. It is unbiblical and wrong for married couples to have separate rooms, Mark Driscoll explains, because "Hebrews 13:4 speaks of 'the marriage bed' and not 'beds.'" ("Marriage bed" is a metonymy, a rhetorical reference to sex itself; it is never a good idea to base an exegetical point on a figure of speech.) Esther is the perfect example of a godly submissive wife, Grace Driscoll tells us: "Amazingly, when she had an extremely urgent request, she respectfully waited outside [her husband's] room to be heard. She didn't barge in and demand that he do what she wanted …. She didn't disregard his need for respect." (This was, of course, because she'd have been executed by Xerxes if she had.)

Real Marriage also features a pronounced inability to separate cultural norms from timeless truths. The Driscolls seem fairly blind to their own cultural biases (where else but in the world of conservative Seattle evangelicals would you find a pastor nonchalantly assuming that Christian wives don't work, while in the next breath recommending a life coach for everyone?), and this leads them, too often, to write prescriptions based on bad evidence. For example, they explain that Christian men should move out of their parents' homes to prepare themselves for marriage:

God … established a threefold process as the pattern and precedent for marriage that both Jesus and Paul quoted in their teaching. First, a guy needs to grow up by moving out of his parents' house, paying his own bills, worshipping his God, and taking care of himself. Second, a man is then able to pursue a noble woman in a noble way.

Actually, most good Israelite boys tended to stay home until their fathers brought them their brides. (Sex is the third part of the pattern, by the way; more on that in a minute.)

But a misunderstanding of history, like sloppy exegesis, isn't exactly unusual in evangelical literature. Despite these flaws, and a few too many condescending remarks about emotional and fragile females, Real Marriage contains quite a lot of thoroughly helpful material. "If you are married, you will have conflict," the Driscolls conclude. "You cannot avoid it because marriage is an unconditional commitment to an imperfect person …. Sin is the problem. The gospel of Jesus Christ is the answer."

The person at the center, the standout, the church celebrity: this, for Driscoll, is what holds a church together.

Or you could just ask for counsel from a couple of ordinary folks who have managed to stay married. They'll probably suggest that you talk to each other about your emotions, do nice things for each other, cultivate friendship, plan date nights. They'll likely tell you that sex within marriage is a good thing. They'll recommend forgiveness, kindness, patience. They'll give you pretty decent advice.

Susan Wise Bauer is writing a four-volume history of the world, published by Norton. Volume 2, The History of the Medieval World: From the Conversion of Constantine to the First Crusade, appeared in 2010.