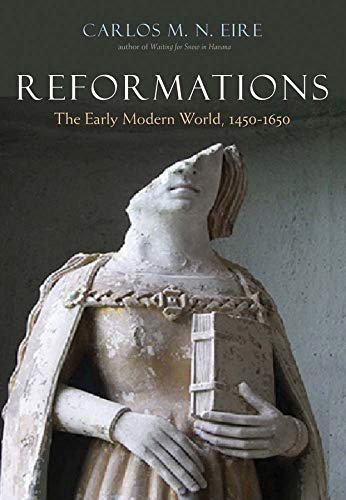 Next year the 500th anniversary of Martin Luther's promulgation of his Ninety-Five Theses will provide more than the usual temptations for abusing historical memory. Luther sites in the former East Germany are already suffering from commercial hype, some serious Catholics and Protestants are gearing up for another round of theological finger-pointing, less serious Protestants could be infected by fervent but ill-informed hagiography. Against such poisons, Carlos Eire's magnificent survey of "the early modern world" offers just the right antidote of seasoned historical judgment and the best kind of stimulant for thoughtful reflection on the history of Christianity in the dense interweave of religion, culture, and society at the dawn of modern Europe.

The volume's only possible drawback is its length, which at about 400,000 words cannot be gobbled down in a hurry, but demands the most careful savoring. In compensation, what so many words can offer—along with 23 pages of compact notes, another 74 pages devoted to bibliography, and 152 well-chosen images from the period—is four books for the price of one: a broadly researched and well-balanced account of church reform before 1517 (130 pages); an empathetic, but not uncritical narrative of what has been traditionally called theReformation (234 pages); a wide-ranging narrative describing Catholic reforms that expanded and deepened after Protestantism emerged (156 pages); and a rich interpretation of "consequences" for theology, popular religion, politics, science, high culture, education, and more in the wake of the Protestant and Catholic reformations (235 pages).

Although the book deserves an all-day colloquium to properly consider its organization, emphases, and arguments, one place to begin is by identifying Eire's overall point of view. It might be called "early modern history from the Contarini Angle." Gasparo Contarini (1483-1542), an influential Venetian politician who eventually became a Catholic cardinal and priest (in that order), also served as an advisor to Pope Paul III (1534-49) as the latter labored desperately to staunch the ecclesiastical bleeding caused by the likes of Luther, Ulrich Zwingli, John Calvin, Henry VIII of England, and Menno Simons. Contarini was also the author of a 1516 tract, On the Episcopal Office, which a year before Luther's famous Theses blasted the church's higher clergy for failing in their spiritual duties. In 1537 he fired off a similar salvo, On the Mending of the Church, denouncing the "evil morals" and "innumerable scandals" that corrupted the Catholic priesthood. Then in 1541 he pulled together a meeting in southeastern Germany, at Regensburg, that recruited major leaders from both sides in an effort at reconciling break-away Protestants to the church. Protestants in attendance included Luther's chief lieutenant, Philip Melanchthon, and the reformer of Strasburg (also active later in England) Martin Bucer. They were matched by Romanists of equal reputation, including Johann Eck, who had been one of Luther's earliest antagonists and who, a few years after Luther, also translated the Bible into German.

Remarkably, under Contarini's prodding the assembled theologians came to an agreement on the nature of justification by faith. Although Luther and Pope Paul III repudiated the agreement as filled with too much ambiguity, others like John Calvin and the participants considered it a hopeful step towards reconciliation. It affirmed that God's grace was the foundation of justification (the Protestant insistence), but also that true faith would always show itself active in love (the Catholic insistence).

When, however, Regensburg turned to questions of authority, the meeting fell apart. Contarini was a genuine reformer who took Protestant criticisms of Rome seriously (he had, after all, made many of their criticisms himself), and who was willing to move on justification. But he was also a firm Catholic who would not budge on the authority of the pope, the indispensability of the church's magisterium as the final interpreter of Scripture, and the independence of the church from domination by political rulers. This last reservation was crucial, since, with the exception of sectarian movements like the Anabaptism of Menno Simons, enduring Protestant movements advanced only where city councils or local monarchs assumed control of church as well as state.

Eire's Reformations is Contarini-esque most obviously in its favorable account of those Catholics who, before and after 1517, agreed with Protestants that church reform was necessary, but who also believed that breaking with centralized church authority would cause irreparable harm. Eire's treatment of a vast roster of actors is unusually even-handed—with the possible exception of John Knox, where the connotations of "zealous" and an "incendiary" and "misogynist" who specialized in promoting "rioting" seem to point in only one direction. In a different register, Eire obviously respects the utter sincerity of Martin Luther's passionate search for a gracious God. He also conveys perfectly the reasons for Luther's central place in the era's history: "the very reason that he had risen to prominence so quickly was that he embodied something much larger than himself and articulated most eloquently the disappointments and aspirations of so many others." About Zwingli, Calvin, and other leading Protestants the book is measured, empathetic, and informative.