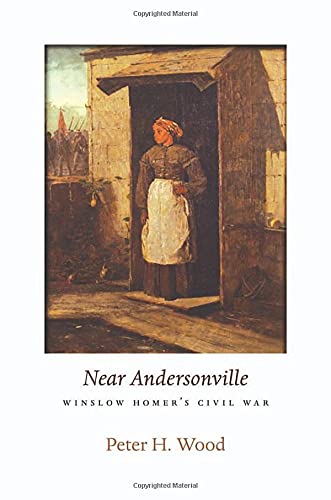 Until picking up the historian Peter Wood's slender new book, I had never heard of Winslow Homer's painting Near Andersonville (Andersonville was the Georgia prison camp where thousands of Union soldiers died during the Civil War). The painting, which Homer completed in 1866 and which currently hangs in the Newark Museum, depicts an African American woman standing in a doorway; in the background, Confederates escort Union soldiers. In his engrossing book by the same name, Wood argues that Near Andersonville "explores the question" of "What happens … if any part of the Civil War drama is viewed explicitly from the vantage point of the enslaved."

Wood offers an illuminating, if at times speculative, reading of the image. Three of his observations struck me as most intriguing. First, he reads the woman's position in a doorway—a dark room to her back and a small shadow "extending back from her feet [that] implies she is still shackled to that dark, confining space"—as a synecdoche of the "transition between two very different worlds" that the woman both "faces, and epitomizes." Second, Wood notes that the woman stands in a mud-sill, and recalls that in 1858, the slave-owning senator from South Carolina, James Henry Hammond, offered his "Mud-sill Theory." Hammond argued that every civilization needed a servant class—the "mud-sill of society"—to do menial labor and free people like Hammond for loftier tasks. Lincoln verbally refuted this theory a year later, and, Wood argues, Homer's painting constitutes a visual refutation. Third, Wood suggests that the woman depicted in the painting might be pregnant—he examines how her apron falls, noting creases and folds that suggest girth underneath, and muses that her left hand, pressed "distinctively against her lower frame," may be "the characteristic gesture of a woman feeling for the first movements of a child within." This possible pregnancy, Wood suggests, symbolizes the transformations of the Civil War—most centrally, emancipation, which contemporaries spoke of as a "new birth of freedom."

Wood also traces the painting's remarkable history. It was inherited in 1960 by the five children of New Jersey banker Horace Kellogg Corbin. None of the children knew what the painting was called, or how it had come into their family. Wood's researches turned up the original owner of the painting—a Corbin ancestor who taught at a school for freedmen in South Carolina during the Civil War. His careful reconstruction of the painting's provenance, and his account of the discovery of the painting's title, are every bit as rewarding as his careful analysis of the visual symbolism of the painting itself.

Lauren Winner is an assistant professor at Duke Divinity School. For the academic year 2010-11, she is a visiting fellow at Yale's Institute for Sacred Music. Her book A Cheerful and Comfortable Faith: Anglican Religious Practice in the Elite Households of Eighteenth-Century Virginia is just out from Yale University Press.