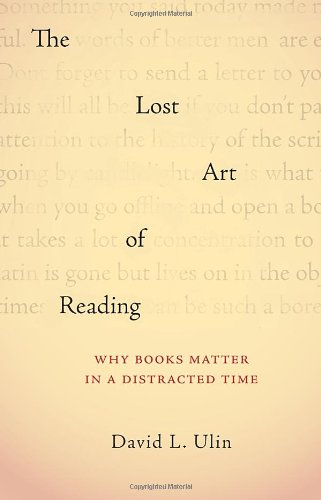 David Ulin's memoirish defense of reading "in a distracted time."

David Ulin, book critic at the Los Angeles Times, was the editor of the paper's review section during the period in which it ceased to exist in its traditional form. This same period—we're still in it—has seen the emergence of a new subgenre: reports on the reading life and how it has changed under the impact of digital technology. In The Lost Art of Reading, Ulin makes his own report.

This is a short book, pleasing to hold, memoirish but not a memoir, jumping here and there. It begins with Ulin's 15-year-old son, Noah, telling him that "reading is over. None of my friends like it. Nobody wants to do it anymore." After his son leaves the room, Ulin tells us, he was "struck by a disturbing realization …. And indeed, I saw … with the force of revelation, I could not say that he was wrong."

A break in the text follows this declaration, and the next section begins with what has become a salient motif in this new subgenre: "Sometime in the last few years—I don't remember exactly when—I noticed I was having trouble sitting down to read." How that happened (it began after he got a high-speed internet connection for the first time), how his personal experience reflects larger social shifts, and why he isn't ready, after all, to concede that his son's judgment is unanswerable: this takes up the rest of the book.

Whether or not you have shared Ulin's experience, and whether or not you are persuaded by his forays into cultural history (Joan Didion, he tells us, "is smart enough to know that narrative has long since shattered, that the dissolution has its roots in the fallout from the atomic bomb"), if you care about books and reading, you'll find Ulin worth your time.