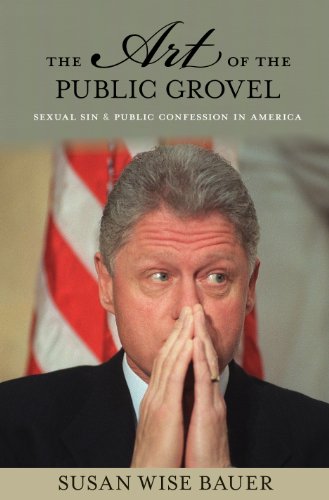 How to look like you're taking responsibility while you're actually asking for sympathy.

The confession of sin and the confession of faith have always been interrelated in Christianity, with sin typically being confessed in private and faith in public. That relationship is exactly backwards today. The confession of sin has become increasingly publicized and the confession of faith increasingly privatized. Confessing your faith, as President Bush famously did in a televised debate, can lower your public status, while confessing your sin, as President Clinton demonstrated, can raise your ratings. Let's all admit it: our culture is hyperconfessionalized. Everybody might not be doing it these days, whatever "it" is, but everybody is certainly talking about it. In the era of AIDS our desires have been chastened, but our need to know is greater than ever.

Confession—whether on talk shows, reality TV, trashy tell-all books, or in the Oval Office—has become big business, the spiritual equivalent of our obsession with sports. Especially when it comes to sex, we are as transfixed by sinners who bare their souls as we are by stars who bare their bodies. Sexual confessions have their own strip-tease quality, baiting us with the revelatory power of words. They trivialize the strange and normalize the bizarre. President Clinton, for example, can argue about the meaning of the word "is" when he is really talking about the predatory seduction of a young employee, and he can leave office with the highest approval rating in history. He deserved it; he put on a good show.

The trick to a successful confession, according to Susan Wise Bauer's very entertaining book, is to look like you are taking responsibility while you are actually asking for sympathy. In other words, start off confessing your sin but end up showing how you have actually been sinned against. How else can you explain why Clinton's confession worked and Teddy Kennedy's did not? Or why Jim Bakker lost his ministry but Jimmy Swaggart kept his? The language of victimization justifies any deed, as long as you come clean before you begin rolling others in the dirt.

What Bauer calls "the public grovel" has become a permanent fixture of American politics, and reading this book is like putting the noses of these famous men (all of her examples are male, with the exception of Aimee Semple McPherson) in the mud all over again. Indeed, by setting herself up as the arbiter for what works in public confessions, Bauer is playing the role of a national confessor, chastising the rich and powerful for their poor performances in the proper decorum of supplication. Wouldn't we all enjoy a little more squirming and a little less rationalization in these spectacles?

Bauer's book, however, is more than a seminar in how to cringe with dignity. It is a lesson in how religious rituals, no matter how old they are, never die—they just leave the sacred and enter the profane. Television is the new confessional, but the public makes for a bad priest, absolving sinners according to the standards of entertainment rather than repentance. Bauer's history of confession, interspersed among her stories of famous American confessions, is itself something worth confessing. How did American Christians allow this sacred act to become the means of so much cheap melodrama?

Bauer lays most of the blame for this predicament on the Protestant Reformation. In the early church, confession was public, and it was reserved for the most major sins, especially betraying the faith. A class of confessors soon emerged among those facing execution at the hands of the Romans, presumably because they were on the verge of martyrdom and thus soon to be sharing in God's power and glory. In the early Middle Ages, monks served as spiritual directors, especially in Ireland, and this practice was gradually institutionalized. The Fourth Lateran Council in 1215 required annual confession for all Christians, which turned this sacrament into the primary means by which European society enforced social morality. The more universal confession became, the more it needed to be regulated, with handbooks specifying the penalty for various misdeeds and specialized terminology distinguishing between levels of guilt.

Protestants thought confession had become a burdensome routine as well as a source of illicit profit and power for the church. Ironically, however, they ended up re-creating the very thing they criticized. By liberating confession from its institutional restraints, the Reformers laid the groundwork that made it ubiquitous. Without the assurance of external absolution, Protestants needed a way of demonstrating the authenticity of their internal convictions. The Puritans solved this problem by requiring all Christians to give an account of their conversion. As a result, confessions became as standardized as they were in the Middle Ages. By the 19th century, revivalists had turned confession into big business. Catholicism, for all of its problems, had kept confessions private and confidential, while Protestants transformed them into a public spectacle.