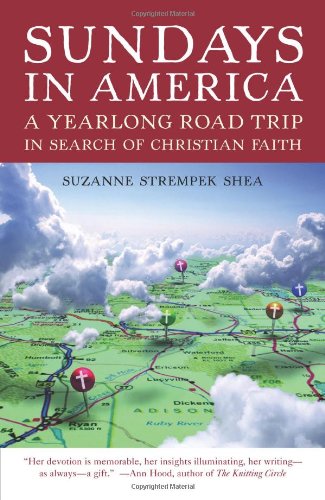 Church-Hopping with a Purpose

Fifty-two churches in a year.

I'm trying to think of something that's as strange as church. As frankly odd. As consistently peculiar. My own church, for instance. I love it. But I wonder how it might appear to a Martian. Or, to John the Baptist, say. Or, for that matter, to Suzanne Strempek Shea, author of Sundays in America: A Yearlong Road Trip in Search of Christian Faith. Shea, a writer who made it her business to visit fifty-two churches in a year, and to write a chapter about each one. It's a lot of churches. It's a lot of chapters.

Shea visits churches chosen for what they are not—Roman Catholic, the church of her youth—and for what they are—Christian, the latter being defined with unprecedented freedom. Here we have Mormons, Baptists, Jehovah Witnesses, Presbyterians, Christian Scientists, Spiritualists, Quakers, Shakers, Greek Orthodox, Moravians, plus evangelicals of diversified particularity.

The litany's the same for every one. After a brief history of the religious organization, Shea describes designated and/or freelance greeters, carpet tuft and color, seat cushions, dress code, percentage of men and children, (frequently small), hymn lyrics, accompaniment, collection plate design, conveyance for communion (in one instance, "a silver hubcap-type plate containing matzo-like bread and edged with polio vaccine cups of wine"), prayer style, and sermon highlights, with quotes and cadence noted. And we are there, joining Shea in every church-induced behavior from fright and fidgeting to unscripted hallelujahs. And we like her company, this softly spoken woman graced with wit and quiet charm. She's warm and generous, sharing her family and her life as freely as she shares the pew.

After a few dozen chapters, the experience grows a bit routine. I have decided, though, not to complain, since I think it is this ritualized recital that enables us to feel so present at each service. (Okay, okay, so I'm Anglican.) We're not told about these churches over Sunday dinner; rather we are roused, often far too early, dressed up and dragged off to church in every sort of weather, every blessed Sunday for a year. This book is not necessarily a fun read, but not all the good in life is unalloyed pleasure (see: church).

And I think this book is good for us. I don't know how it will strike the great unchurched, but it has much to teach anyone who warms a pew with any regularity. The first few Sunday morning visits might be curiosities, but by the time we've moved from Easter through about fourteen weeks of Pentecost, a certain recognition starts to dawn. By Advent, Shea is forcing us to say, Good grief! What on earth is going on here? On which day did God create this meet-greet-pray-pay-preach-part protocol that seems to pervade everything gathering from the Kykotsmovi Mennonite Hopi Church to the Saint John Will-I-Am Coltrane African Orthodox? Shea catalogues with kind respect the variations on the theme—shouts and swoonings, unbroken silences, art, drawing, dance—but more than they are different, these churches are the same. It leaves us wanting to decipher whatever meaningful distinctives there may be.

Witnessing church pattern played out in such wide diversity of dogma, cant, and sensibility, we think about the churches we attend. The wherefores, and the whys. There's the question, so ably asked by this unusual book: what are all these people in these places doing? And we, now standing juxtaposed, must also ask, what are we about?

There's a show on television called Wife Swap, in which two women switch homes and families for two weeks. It took me less time than that to figure out the fascination, which is that it allows us to see other people at home when we're not there. All we know of other people's private lives are fictional depictions, and the sometimes stories other people tell. But watching Wife Swap, all is on display. Quotidian minutiae in profusion. Absent Wife Swap or Sundays in America, we run the risk of thinking that the way we do it, is the way it's done. Forced to look at other people's parenting or paper towel consumption, their pastor's pulpit antics or provincial piety, we start to look at how we do things in our kitchens, in our sanctuaries.

And Shea is telling us our story too. Her opinions may not be our own, but oh, we have opinions—let us not pretend otherewise—and we never go to church without them. Once Shea sets us to comparing, she doesn't stop with style, she says we best look at substance too. Of her visit to Saddleback Church, she writes "I don't care if the pastor tithes 99.9% or wears his pajamas. I just want the experience to hit home intimately." She knows the act of entering a church is the act of looking for something.