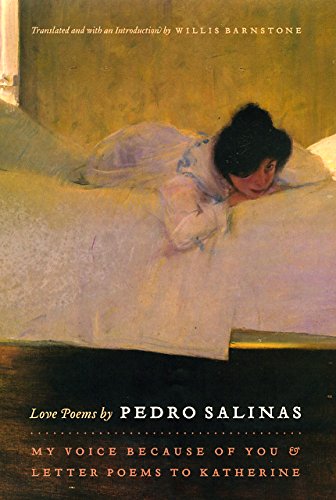 Love Poems by Pedro Salinas: My Voice Because of You and Letter Poems to Katherine
Pedro Salinas
University of Chicago Press, 2010
256 pp., 44.39

At this point I am reminded of Aaron Belz's strong concluding assertion when recently reviewing in Books & Culture the correspondence of another pair of lovers, the poets Paul Celan and Ingeborg Bachmann. They were better at writing, he said, than loving each other, or others. The same may ultimately be said of Salinas, whose ardor at least is unmistakable in poems and letters both. The passions and eventual disappointments of this married man's and father's fifteen-year relationship with Whitmore were not even entirely secret—Barnstone recalls how he first met the Salinas family in 1947, at Bread Loaf in Vermont. He heard about Whitmore from the poet's son, who eventually became one of Barnstone's closest, longtime friends. This biographical context has value, then, but it makes a rather mixed bag out of Salinas' love poems, doesn't it?

Say what you will, My Voice Because of You is indisputably full of love poetry. It is easy to regret Salinas' inspiration and the torment it caused him and the eventual discontentment of both lovers, but only precisians could deny the poetry's power, or refuse to encounter it on its own terms. Or rather we allow poems into our own lives and circumstances, and technically, into our very bodies when reciting their lines. We speak the poet's words and make them our own, make their dramas briefly our dramas. Salinas himself proffered a similar theory in a prologue to an earlier English translation: "Instead of dis-tracting or at-tracting us to another place, poetry turns us inward, invites us to an interior activity, asks us to reproduce in our own hearts what the poet is feeling." In providing a place of residence for poems, we also become their temporary landlords, and in that sense we take a readerly responsibility that personalizes the poems, lifting them from their originating circumstances. It is necessary to read deeply, all the more so, when writing preempts a consequence-free association with authors and contexts. To read responsibly is to hold in mind competing acknowledgments about what we read, all at the same time.

In other words, it takes a scorched-earth, gravely reduced sense of art and humans' engagement with it to assert that no future readers could find value in or have sympathy for these poems' emotional interrogations of love, their celebration of the beloved, and the wildly imagined effects upon the lover. Fortunately, most poetry readers dispense with pesky, personal details of composition with relative ease, if, that is, they have come to realize those details in the first place. That is fitting, for poetry rises far above what Philip Sidney called the "bare Was" of history. Nor, for worse or better, is Salinas hardly the first poet to create a memorable poetic sequence under, let's say, strange fits of passion. I have learned to anticipate students' frustration and puzzlement when they first hear about Gemma Donati. Who's she? Dante's real wife, who goes unmentioned in the Commedia. She awkwardly contrasts with Beatrice, the great poet's deceased love of his youth. Without bothering to explain himself, Dante sublimates Beatrice, not Gemma, into literary immortality. Even in the more biographically compromising Letter Poems to Katherine, we should still be able to admire the sentiment that Salinas writes in the margin of one 1934 letter, written from Madrid: "I'd like my poetry to serve you always."

Is there a lesson here? Maybe that love is messy, and even others' love gives us pause. The poetry about love can be messy, too. And still we love, or with great help, try our very best to, our imperfect best. And still people write poems about love, poems for those whom they love, and whose love has made them experience the world differently. One of my favorite, unexpected remarks along these humbled lines is found in a letter of 1941: "What a weird, unpredictable life!" Here Salinas sounds less like an esteemed professor and poet in exile, one from Spain's renowned Generation of '27, and more like a high schooler whose head's still spinning after the prom overnighter. My Voice Because of You also kneels to this sort of realist's outburst: "To love! What unequaled / confusion! How many errors!" Barnstone works against the original lineation ("¡Amar! Qué confusion / sin par!") to create an ironic effect in the English line break. We would like to think of love as unique, unparalleled, but not necessarily in its confusions and errors. Salinas continues a few lines later: "The two of us. What disasters! / Where's the road? Here, / there?"