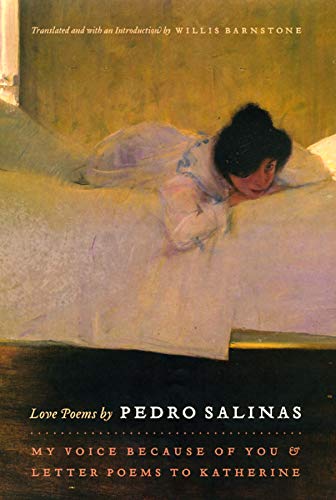 Love Poems by Pedro Salinas: My Voice Because of You and Letter Poems to Katherine
Pedro Salinas
University of Chicago Press, 2010
256 pp., 46.0

A lot of greeting-card poetry gets exchanged on Valentine's Day, most of it veering toward bad jokes, the unimaginatively ribald, or all varieties of treacle—verbal counterparts to soundtracks of romantic dramas from the '70s. It's really ok if you just gave somebody a greeting card. All of us, seeking some genuine way to delight the people we love, have eventually felt those cards staring like little flags of surrender and unoriginality from their garish rows. In moments of weakness or futility, we purchase them. If this year you, too, found yourself among greeting-card perpetrators, then rest assured that there is still plenty of time. On the day after Valentine's, a whole new year on the romantic calendar stretches out before you. You still have options. And if your little card of romantic concession (as in "giving up," as in "concession stand")—if it was not particularly well received, well, chances for recovery still remain.

It is not too late to write that special someone your own poem, or, better, once given to her or him, their own poem in your words. You may instantly shrug off this suggestion, but even if you aren't currently in the questionable habit of writing poems, such a show of effort (that quality so lacking with greeting cards) and the recipient's most likely appreciative ears can make up for a whole host of lyrical sins. Or, barring that, you can give the gift of someone else's words, and sometimes, oftentimes, that is quite all right, too.

Consider, for example, former Poet Laureate Ted Kooser's Valentines, a 2008 collection of poems written over many years and sent out annually as "public" valentines to numerous female friends. Eventually they became "friends" in the Facebook sense: these groups began as fifty readers and grew to twenty-five hundred. A single, additional poem is for Kooser's presumably easygoing wife. Or there is the aptly named Jean Valentine's Break the Glass, released last fall. The final series of poems, entitled "Lucy," represents love poetry of a certain sort: the poems address, rhapsodically at times, the remains (and idea of?) a hominid found in northern Ethiopa, whom locals most poetically named Dinkenesh, "You are beautiful." However fanciful, Valentine frequently shows heart in verbalizing her fascination and sympathy: "O god who transcends time, / let Lucy have a cup," one poem says, with that same care and wish for well-being that we all reserve for our loved ones.

The volume that may interest most this Valentine's week, though, is Love Poems by Pedro Salinas, a newly revised, reissued edition of Willis Barnstone's translation of Salinas' My Voice Because of You. Here's a sampling from that book's famous lines:

When you chose me—
love chose—
I came out of the great anonymity
from everyone, from nothing.
Till then
I was never taller than
the sierras of the world.
I never sank deeper
than the maximum
depths marked out
on maritime charts.
And my gladness was
sad, as small watches are
without a wrist to fasten to,
without a winding crown, stopped.
But when you said: you,
to me, yes, to me singled out,
I was higher than stars,
deeper than coral.

To those in love, love becomes the one worthiness, and even as lovers' give themselves over to the greater worth of the beloved, that love reciprocated more fully individuates.

Barnstone's highly readable version was originally published in 1976, and he has now combined it with Letter Poems to Katherine, poems so-called that he has culled and lineated from the Spanish poet's many prose letters to one Katherine Whitmore, a professor at Smith College. (Salinas himself worked in exile at Wellesley and later Johns Hopkins.) These letters, only discovered in recent years, now in Harvard's Houghton Library, and never before published in English, give crucial context to Salinas' famous book of love poetry. They have obvious importance for purposes of literary biography, but they also complicate the powerful lyrical relationship discernible in My Voice Because of You. They do so by setting a historical, biographical storyline beside the poems' nameless, placeless drama. What was thought to be an imaginative love for these many years now appears to be lyrical screen for Salinas' and Whitmore's relationship. Most obviously, this second, revealing set of letter poems adds a new dimension to some of the first sequence's best-known lines:

To live I don't want
islands, palaces, towers.
What steeper joy
Than living in pronouns!
Take off your clothing,
features, pictures;
I don't want you like that,
masked as another,
always a daughter of something.
I want you pure, free,
irreducible: you.

The beginning and ending of that final sentence explain the wish for pronouns. I. You. The whole world is found there. Traditionally critics have found Salinas' rather writerly focus on pronouns to be a comment on a desired intimacy, and a falling away of everything that is not the enraptured pair. The letter poems now disclose a different reason for this focus—pronouns allow the lovers' real, identifying names to remain concealed.