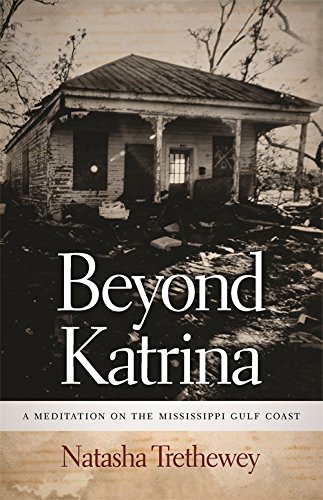 Beyond Katrina: A Meditation on the Mississippi Gulf Coast
Natasha Trethewey
University of Georgia Press, 2010
144 pp., 29.72

A poet's memoir about the impact of Katrina.

The idea was not
to stop it flat, 'trina,
all you had to do was kiss the land
brush your thunderous lips against it
…. Instead,
you roared through like a goddamned man, all biceps and must ….
I thought I taught you better, girl,
I showed you the right way to romance that city,
How to break its heart
And leave it pining for more of your slap.

Also in my anniversary reading is Pulitzer Prize-winning poet Natasha Trethewey's just-published Beyond Katrina, which captures the damage done to Trethewey's childhood home, Gulfport, Mississippi. "I am not a religious woman," Tretheway declares—but she certainly has a poet's eye for religious detail: upon returning to Gulfport, she ventures to a "vacant lot where a church had been. Debris still littered the grass. Everywhere, there were pages torn from hymnals, Bibles, psalms pressed into the grass as if they were cemented there."

There is plenty in this slender book about the consequences of the storm. For example, "With the damage wrought by the storm to the seafood industry, the casinos are now the creators of the dominant economic narrative on the coast." (And those words were written before the Deepwater Horizon spill.) Yet, as the title suggests, the book is not narrowly about Katrina. Beyond Katrina is also a family narrative: it recounts Trethewey's brother's conviction on drug charges. At the day of the sentencing—fifteen years, six suspended—"we know a while will pass before Joe can begin rebuilding his life. On the coast, recovery takes a long time." It is an intensely personal encounter that Trethewey narrates, mourning the loss of her childhood as she walks through ravaged Gulfport: "the destroyed public library is me as a girl."

Naming a theme that runs throughout all of her work, Trethewey writes, "The past can only be understood in the context of the present, overlapped as they are." Beyond Katrina and Blood Dazzler are reminders that the reverse is true, too. Whatever the recovery, the Gulf Coast's future will inevitably be understood with reference to 2005.

Lauren Winner is an assistant professor at Duke Divinity School. For the academic year 2010-11, she is a visiting fellow at Yale's Institute for Sacred Music. Her book A Cheerful and Comfortable Faith: Anglican Religious Practice in the Elite Households of Eighteenth-Century Virginia is coming soon from Yale University Press.