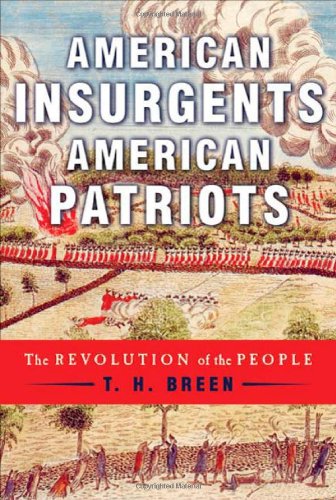 The common people who propelled the American Revolution.

In American Insurgents, American Patriots, eminent historian T. H. Breen reveals how the will to revolt spread through America between the Boston Tea Party and the Declaration of Independence. The stars of American Insurgents are not the usual suspects—Adams, Jefferson, Franklin, and such—but forgotten farming men and women, many of them devout Christians, who organized and propelled the American Revolution by the force of moral indignation.

A widespread evangelical mindset, fostered largely by the Great Awakening of the 1740s, gave Americans a deep belief in their God-given rights, and steeled them for the possibility of rising against established authorities who threatened those rights. Veterans of the revivals, such as the Reverend Jonathan Parsons of Newburyport, Massachusetts, thundered (with no intentional irony) that "the spirit of Christian benevolence would animate us to fill our streets with blood, rather than suffer others to rob us of our rights."

American Insurgents, American Patriots is one of the most compelling accounts I've read of how "the people" forged the Revolution. For all of the book's strengths, however, I can't get comfortable with the title. Breen doesn't really equate the American rebellion—which the British did occasionally call an "insurgency"—and the recent insurgency in Iraq, but he knows that the suggestion is provocative. He hints at comparisons (as when he notes that the Patriots occasionally resorted to "acts of terror" to silence Loyalists) and hints at contrasts (as when he shows how the committees which enforced boycotts of British goods helped to channel partisan fury into political ends). To be sure, one man's patriot is another's insurgent, but I suspect Breen will lose readers who think he is positing moral equivalency between the American Patriots and the insurgents of Iraq. That would be too bad, because he actually shows nothing but judicious sympathy for the common Americans who drove the Revolution.

Thomas S. Kidd, senior fellow at Baylor University's Institute for Studies of Religion, is the author of God of Liberty: A Religious History of the American Revolution (forthcoming in October).