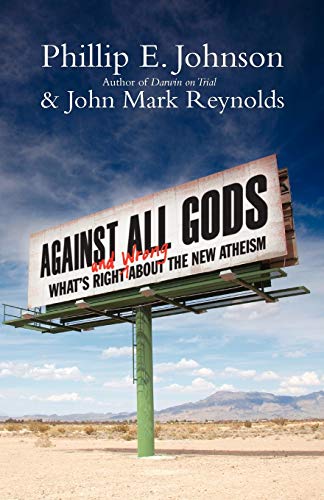 How best to respond to the New Atheists.

When asked for my position on the Creationism/Evolution spectrum, I usually punt to the television series, Friends. In Season 2, Episode 3, "The One Where Mr. Heckles Dies," Ross the paleontologist urges his skeptical friend Phoebe to concede evolution is the only viable scientific option for explaining the genesis (small "g") and diversity of life on earth. Phoebe replies:

I'm not denying evolution …. I'm just saying that it's one of the possibilities. Ross, could you just open your mind …. [W]asn't there a time when the brightest minds in the world believed that the world was flat? And, up until like what, 50 years ago, you all thought the atom was the smallest thing, until you split it open …. Now, are you telling me that you are so unbelievably arrogant that you can't admit that there's a teeny tiny possibility that you could be wrong about this?

Underlying Ross and Phoebe's repartee are significant points. Despite a vocal and sometimes sophisticated minority, contemporary scientists overwhelmingly acknowledge the available evidence and explanatory power of evolutionary theory far outpaces rival accounts for the origin of life. Yet in a few hundred years, the brightest biological minds may chuckle at "evolution" as a historical gaffe of cosmic proportions. They may also perceive erstwhile varieties of "Creationism" and "Intelligent Design" as well-intentioned but misguided. Perhaps a new narrative vying to explicate the emergence of life will not just modify but render all current controversies obsolete. Or, perhaps one of our present models will be expanded and vindicated.

But for Phillip E. Johnson, a UC-Berkeley Law Professor, Emeritus, and author of the Intelligent Design primer Darwin on Trial (InterVarsity, 1991), Phoebe's time-will-tell retort to Ross is insufficient. Johnson avows that historical atrocities associated with Social Darwinism, Stalinism, and Nazism are inseparable from Darwin's Dangerous Idea, to use New Atheist philosopher Daniel Dennett's phrase. For Johnson, scientists like Francis Collins, who affirm biological evolution as complementary to Christian faith, make fascinating conversation partners and stymie atheist evolutionists, but they remain purveyors of a flawed and perilous philosophy.

With Biola University philosopher John Mark Reynolds, Johnson is recently coauthor of Against All Gods: What's Right and Wrong About the New Atheism. Johnson penned the introduction, epilogue, and five of eight chapters. Reynolds contributed three chapters and edited the final manuscript.

Johnson addresses a range of aggressive New Atheists, including bestsellers Richard Dawkins, Daniel Dennett, and Sam Harris and University of Chicago biologist Jerry Coyne. In addition to deriding Darwinism, Johnson encourages university discussion of issues raised by the New Atheists, whom Johnson describes as posing excellent questions but proffering pitiful answers. As with Johnson's advocacy for teaching Intelligent Design in American public schools, fostering dialogue is a dominant trope. Reynolds echoes Johnson's vision for dialogue, and adds insights illuminating how the Christian story harmonizes humanity's deepest intuitions and longings. As C.S. Lewis in "Is Theology Poetry?" testified, "I believe in Christianity as I believe that the sun has risen, not only because I see it, but because by it I see everything else."

To modify Johnson and Reynolds' subtitle, Against All Gods is one example of "What's Right and Wrong About many responses to the New Atheism." Skewering the New Atheists as a whole or individually has burgeoned into a minor publishing phenomenon promulgated since 2007 largely though not exclusively by Christians, at the pace of over a dozen books per year.

Richard Dawkins, dubbed "Darwin's Rottweiler" in the tradition of 19th-century polemicist Thomas Huxley (who called himself, "Darwin's Bulldog"), uncharitably characterizes self-styled refutations of the New Atheists by adapting W.B. Yeats, "Was there ever a dog that praised his fleas?" Put simply, critical interlocutors (fleas) are parasites leaching off Dawkins' dogged success to make money or to establish superior names for themselves.

Dawkins' ad hominem rebuff is unfair in sweeping aside principled and spirited disagreement, and in dismissing potentially sincere concern for the New Atheists and for the people and societies that the New Atheists influence. Does Dawkins deem himself beyond criticism and see all opponents, including Johnson and Reynolds, in (pardon the pun) bad faith? Would Dawkins' critics without him be reduced to draining themselves and each other dry?