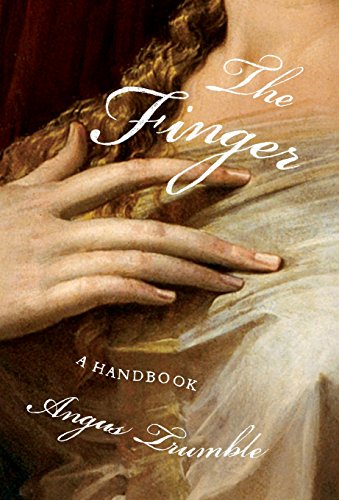 A diverting ramble on the history of the finger.

Having already essayed A Brief History of the Smile, Yale Center for British Art curator Angus Trumble turns his attention to the finger. His is a fascinating tour through the history of digits, with, unsurprisingly, particularly insightful discussions of the finger in art. Trumble's consideration of the Sistine Chapel's Creation of Man is especially satisfying (well, it was once I got over dismay that he did not refer to Martha Serpas' poem "Finishing Touch"). His careful reading of the image includes observations that have intriguing theological undertones, not least "The hands of God and Adam are alike. They carry a family resemblance."

Beyond art, Trumble treats the history of giving someone the finger (the rude gesture, with its sexual resonance, dates at least to Greco-Roman antiquity), as well as the history of pointing and of counting on one's fingers, and the role of fingers in liturgical gestures of benediction. At times, the book feels a bit too much like a catalog—for example, in a chapter of the rise of nail polish, Trumble chronicles the increasing acceptance of colored nail varnish in the 20th century. He includes memorable details, noting Queen Mary's 1929 purchase of "liquid nail polish" at a New York Woolworth's in 1929, and Eleanor Roosevelt's manicure schedule. But one would like more analysis of the meaning of nail varnish. Still, all in all, Trumble's meditation on fingers is an informative, surprising, and diverting read.

Lauren Winner is an assistant professor at Duke Divinity School. For the academic year 2010-11, she is a visiting fellow at Yale's Institute for Sacred Music. Her book A Cheerful and Comfortable Faith: Anglican Religious Practice in the Elite Households of Eighteenth-Century Virginia is out this month from Yale University Press.