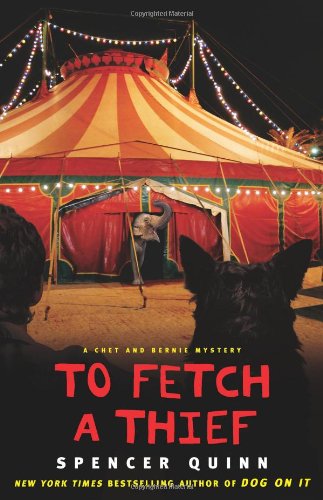 The third installment in the adventures of Chet and Bernie

In January 2009, Atria Books published a novel by Spencer Quinn, Dog on It, that took the familiar noirish conventions of the private-eye novel and gave them a twist: the narrator is a dog. Gimmicky? Cloying? Terminally cute? It could have been all of these, but it wasn't. The voice of Chet the dog is winsome, funny, and somehow—by the alchemy of fiction—utterly persuasive. So who was this unknown author, Spencer Quinn? The bio on the jacket flap was skimpy.

No wonder. "Spencer Quinn," it turned out, is none other than Peter Abrahams, "my favorite American suspense novelist," Stephen King has said (and one of my favorites too). He followed with Thereby Hangs a Tail in January 2010 and now, in time for Christmas gifts, To Fetch a Thief, the third installment in the adventures of Chet and his partner Bernie Little of the Little Detective Agency. Like its predecessors, this new story is based in "the Valley," somewhere in the American Southwest, ranging out from there (in this instance, across the border). The case involves a missing circus elephant, Peanut, for starters, but soon ramifies.

If you haven't yet entered Chet and Bernie's world and are inclined to investigate, best to start with Dog on It. If you find that it's your cup of tea, you'll quickly get through all three books and join the rest of us impatiently looking forward to number four. While you're waiting, you might want to visit Chet's blog.