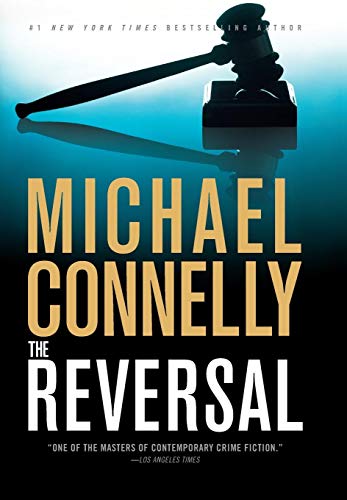 Michael Connelly's newest book, The Reversal, is hot off the press, and—no surprise—it's another stunner. Jason Jessup is about to be retried after serving 24 years for murdering a 12-year-old girl. DNA traces taken from the body, it turns out, did not belong to him, and now the public is clamoring for his exoneration. LAPD Detective Hieronymus Bosch and attorney Michael Haller are convinced, however, that Jessup is guilty as charged—and extremely dangerous.

That's the set-up for this combination courtroom drama, detective story, and thriller featuring two of Connelly's most compelling characters. Harry, the cop, is a restless, driven loner, while Mickey, the lawyer, is a brilliant, arrogant gamesman. Neither man plays well with others. But now they are going to have to work with each other and with Haller's first ex-wife, a prosecutor nicknamed Maggie McFierce, on a next-to-impossible case. As the defense attorney says to Haller, "You don't have much in the way of evidence, can't find your main witness, and the DNA is a case killer. You're captain of the Titanic, Mickey, and [the district attorney] put you there. Makes me wonder what he's got on you."

For years I'd dismissed Connelly as just another author of mindless thrillers. I'd seen his mass-market editions piled high in airport bookstalls, and I figured that no author with such a prodigious output—22 novels in 19 years—could be worth reading. Call me a snob, or call me sexist (I was somehow managing to read every one of Sue Grafton's detective stories as they were published without noticing my inconsistent literary standards). Then a highly intelligent book-editor friend opened my eyes. "Read The Scarecrow," he ordered.

OK, I thought, I'll give Connelly a try. So last year I borrowed his 20th novel from the public library. For two days, I didn't come up for air.

The Scarecrow (2009) features Jack McEvoy, a star reporter at the L.A. Times, about to lose his job because internet competition, bad management, and the recession have ruined the newspaper's bottom line. As a former book editor married to a current magazine editor, I immediately identified. I wasn't surprised to learn that Connelly himself once wrote for the L.A. Times. His writing is journalistic: unadorned prose and careful observation, with good communication techniques. His plots are sometimes complex, but he makes sure to take his readers with him each step of the way. If technical information threatens to overwhelm, one of his characters will pause and explain what's going on to a less-informed or newly arrived character. Connelly knows how to set a scene, and he writes convincing dialogue. You can count on a surprising plot twist toward the end of each book. And you can't help reading just one more chapter.

For all those reasons, I loved The Scarecrow. As soon as I finished it, I checked out The Poet (1996) to get the back story, and then The Narrows (2004) to learn even more about FBI agent Rachel Walling. The Narrows introduced me to FBI agent Terry McCaleb, so I had to read Blood Work (1998)—and of course that necessitated watching the film by that name produced, directed by, and starring Clint Eastwood (the book is better). The Narrows also introduced me to Connelly's major protagonist, Harry Bosch, present in 16 books and counting. It was time to go back to Connelly's first novel, The Black Ice (1992), and read straight through the series.

Connelly's website says that the author "decided to become a writer after discovering the books of Raymond Chandler while attending the University of Florida." The Chandler connection is obvious. Bosch, like Chandler's detective Philip Marlowe, is a loner who never met a rule he couldn't bend. Both men work in downtown Los Angeles. Both drink and smoke far more than is good for them (though Bosch eventually gives up cigarettes). While Marlowe relaxes with poetry and chess, Bosch listens to jazz.

But if Chandler, writing in the 1930s, '40s, and '50s, helped to define hardboiled detective fiction, Connelly has expanded the genre into something far more psychologically developed (my library rightly shelves his books under Fiction, not Mysteries). Bosch is no elegant enigma. He's an orphaned, street-smart, self-taught, sometimes brutal Vietnam vet who antagonizes his coworkers and has trouble making and keeping personal relationships. Like his namesake, the late-medieval painter of chimeras and grotesques, he has seen the dark side not only in the world but in himself.

Harry will be forever imprinted by his traumatic childhood, his time as a tunnel rat in Vietnam, and his encounters with evil during 36 years on the mean streets of L.A. But he is not a static character. Over the years, he has grown. His wrestling with demons has made him stronger. He has begun to trust, to commit, and even to love. He has started to accept help, if reluctantly. Without giving up his trademark truculence, he will try to work as part of the team.