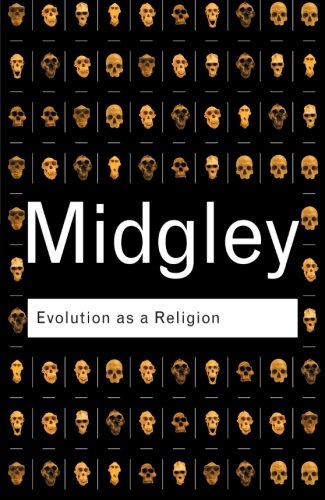 Long before Marilynne Robinson, author of Absence of Mind (2010), drew back the curtain of science to discover "parascience," another woman—equally cogent and eloquent but also more whimsical—taught us a lesson which needs repeating: scratch a scientist and watch a metaphysician bleed. Mary Midgley, a Brit who belongs to an extraordinary generation of women philosophers (most notably Iris Murdoch, Elizabeth Anscombe, and Philippa Foot), earned her reputation for scrapes with the laboratory tribe in Evolution as a Religion (1985), Science as Salvation (1992), and Science and Poetry (2001). In all these titles, she extracted science from the formaldehyde jar, where it tries to escape the infectious presence of history, ideology, poetry, religion, and psychology. What emerges is a "human, all too human" enterprise: "facts are not gathered in a vacuum, but to fill gaps in a world-picture which already exists. And the shape of this world-picture—determining the matters allowed for it, the principles of selection, the possible range of emphases—depends deeply on the motives for forming it in the first place."

Evolution as a Religion, a penetrating analysis of the optimistic and pessimistic distortions of evolutionary theory, reveals that many of Darwin's high-profile disciples make a mockery of him by turning evolution into melodrama, hence Midgley's dedication of the book "To the Memory of Charles Darwin Who Did Not Say These Things." Where the optimistic distortions owe to Jean-Baptiste Lamarck's "escalator fallacy," in which "evolution is a steady, linear upward movement, a single inexorable process of improvement, leading … 'from gas to genius' and beyond into some superhuman spiritual stratosphere," the pessimistic distortions owe to Herbert Spencer's "tooth and claw" fallacy, in which life is essentially competitive, "all social feeling as somehow mere humbug and illusion." Why resort to melodrama? The physical picture, on its own, cannot be grasped by the intellect or digested for meaning.

Evolution, in the mythical imaginations of Jacques Monod, Steven Weinberg, Edward O. Wilson, and Richard Dawkins, fills gaps in the desacralized world-picture of the West, becoming what Midgley calls "the creation myth of our age. By telling us our origins it shapes our views of what we are. It influences not just our thought, but our feelings and actions too, in a way which goes far beyond its official function as a biological theory. To call it a myth does not of course mean that it is a false story. It means that it has great symbolic power, which is independent of its truth."

Wresting Darwin from the dramatizers, Midgley implores us to adopt his emotionally balanced response to evolutionary speculation: "on the one hand, optimistic, joyful wonder at the profusion of nature, and on the other, pessimistic, sombre alarm at its wasteful cruelty." Melodrama occurs when the "tension of opposites" is missing. Two prevailing errors today—creationism and Spencerism—confuse religious and scientific functions, "attempting to produce an amalgam which will do the work of both." They "distort not just the province which they are trying to take over, but also the one in whose name they want to make the conquest." A new world-picture must overcome these errors. Reading this book is like drinking a pot of English Breakfast tea without milk or sugar: the mind is quickened to the metaphors and myths that surreptitiously cling to evolution. Drink up.

Further reading: For the 2009 double anniversary of Darwin's birth and publication of On the Origin of Species, Theos, a public theology think tank in Great Britain, extensively interviewed Midgley.

Christopher Benson is a writer and educator in Denver, Colorado. He recently entered the blogosphere at Bensonian.org.