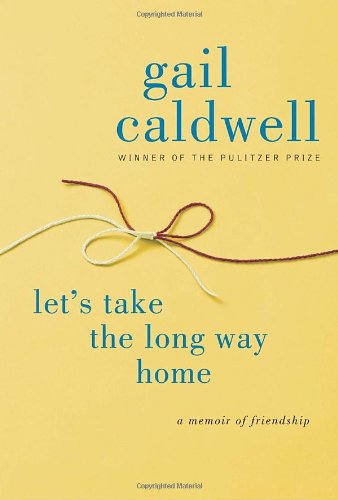 A memoir of friendship, grief, and dog-walking.

I picked up the book in the bookstore; I read a few pages, was interested, but ultimately put the slim yellow volume back on the shelf because I was broke and because dog-walking seemed to be a major theme and because it seemed so unlikely that a book on friendship and grief could actually be any good (it's hard enough to treat one of those topics well in a memoir, let alone both—they are so personal, grief and friendship, so intense, so specific; it's the rare writer who can really invite someone else in). But then I kept thinking about the pages I'd read, and back at home I fired up Google books and ate up what was on offer, and then I got back in my car, went back to the bookstore, and purchased Let's Take the Long Way Home, because I had to read it that very night.

Gail Caldwell has succeeded, and then some, in this account of her friendship with (fellow memoirist) Caroline Knapp, a friendship cut short when Knapp died seven weeks after being diagnosed with lung cancer. (Although part of what Caldwell makes clear is that the friendship was, in a sense, not "cut short" if "cut short" means "brought to an end." The two women's love abides. It might be more accurate to say that when Knapp died, their friendship was reshaped in wrenching ways neither had anticipated.) Their connection was forged quickly; it was absorbing, and intense, and sustained by hours of dogwalks and conversations of almost analytic specificity about every crevice of their lives. It was the kind of intimacy, Caldwell understands, that married people often find with their spouses. "Caroline and I … were in line for the quotidian closeness, the emotional proximity of day-to-day life," each occupying for the other the "primary position" of the one who "has spare keys to the house, emergency contact numbers in the wallet."

So how did Caldwell draw me into that pas de deux? How did she make me care about the intimacy of two women, one dead, whom I've never met? In part, it's just her prose—simple, lovely, masterful prose (failed romances were "wrapped in the amber mist of alcohol, which meant they rarely stood a chance"). And in part it's her consistent, matter-of-fact insights into familiar experiences ("Everything about death is a clichè until you're in it"). Caldwell even managed to make me care about her fierce attachment to dogs: I am, as they say, not a "dog person," and I find dog people's attachment to dogs a little weird, and a little tedious, but I was right there with Caldwell on every dog walk, and I am now, remarkably, inclined to read the one book by Knapp I have not read, her dog-ode Pack of Two (in which Caldwell and her Samoyed Clementine appear as Grace and her Alaskan malamute Oakley).

More, even, than an account of friendship and mourning, Caldwell offers along the way insight into the nature of alcoholism, into the emotional terrain of singleness (" 'Let's face it,' a male friend, single and in his forties, said to me one say about our unpartnered status. 'Neither one of us got here without a lot of fancy footwork' "), and into the choreography of a life shaped around writing.

There are topics I wish Caldwell had treated. For example, when she and Knapp met, Knapp was just coming out of a long and intense romantic relationship. She later reunited with the man (and, practically on her deathbed, married him). Caldwell writes with nothing but affection for Caroline's beloved; still, I wondered how the friendship changed when their two became a three. But to want more of this book is simply that, to want more. I miss the book already.

Lauren Winner is an assistant professor at Duke Divinity School. For the academic year 2010-11, she is a visiting fellow at Yale's Institute for Sacred Music. Her book A Cheerful and Comfortable Faith: Anglican Religious Practice in the Elite Households of Eighteenth-Century Virginia was just published by Yale University Press.