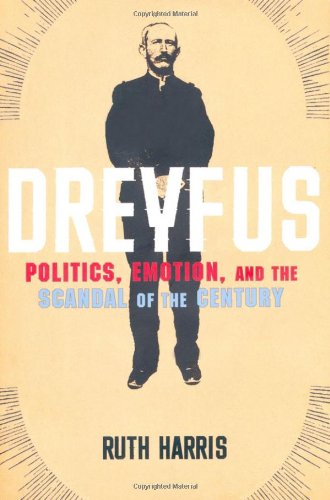 In this absorbing study of the Dreyfus Affair, Oxford historian Ruth Harris probes the mentalities and motivations of the principals: Dreyfus' accusers; his loyal wife Lucie and brother Mathieu; journalists who made copy out of his case; Zola and other intellectuals who took up the pen to defend Dreyfus; women who held salons in which both Dreyfus' accusers and supporters gathered. Fans of Harris' insightful and empathetic study of Lourdes will not be surprised that she attends throughout to the role of religion in the Dreyfus case. Harris analyzes, for example, the Christological and Marian imagery that pervaded the letters of friends who wrote to Lucie Dreyfus to offer solace and support. At the same time that many supporters figured Lucie Dreyfus as the suffering Mary, some Protestant supporters articulated "spiritual connections with Jews": one Protestant, for example, wrote that "your husband undergoes martyrdom with the same innocence as my co-religionists, Calas and Sirven, underwent in 1762."

But what distinguishes this book most is Harris' refusal to make cardboard heroes out of Dreyfus' supporters. As she explains in the introduction, "My account of the Affair is untidy, keen to look at the paradoxes of the left as well as those of the right. There is no rigid framework into which individuals or ideas can be safely placed, nor can a facile moral template be constructed to distinguish 'good' men and women from 'bad' ones. Though I sympathize more with the Dreyfusards than with their opponents, they had their fair share of incoherencies and intolerances." For example, Harris argues that Dreyfus' supporters were motivated not only by a disinterested commitment to justice and truth but also, sometimes, by a dislike of Jesuits (who numbered among Dreyfus' accusers).

Every generation needs an account of the Dreyfus Affair; Ruth Harris has supplied ours.

Lauren Winner is an assistant professor at Duke Divinity School. For the academic year 2010-11, she is a visiting fellow at Yale's Institute for Sacred Music. Her book A Cheerful and Comfortable Faith: Anglican Religious Practice in the Elite Households of Eighteenth-Century Virginia was just published by Yale University Press.