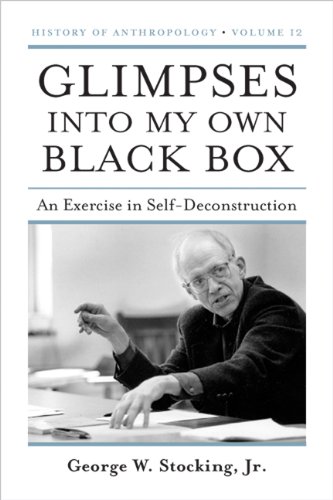 Glimpses into My Own Black Box: An Exercise in Self-Deconstruction (Volume 12) (History of Anthropology)
George W. Stocking Jr.
University of Wisconsin Press, 2010
168 pp., 24.95

The foremost historian of anthropology turns his gaze on his own history.

When Stocking's PhD program was coming to end, he was promptly hired by the History Department at the University of California, Berkley. Soon he was off on a fully-funded year-long sabbatical. When told that he was supposed to submit a retrospective report, he scrawled a reply saying that he did not really get anything done on his sabbatical because of unspecified "personal difficulties." In response, he was informed that this note was in itself a satisfactory report! The envious young academic reader may want to skip the next subsection of Stocking's narrative, entitled "Tenure Without a Book" ("I was able to sustain the impression that in due course I would produce a major work," he comments).

Stocking was then head-hunted (to use an anthropological phrase) by the Department of Anthropology at the University of Chicago, probably the most prestigious program in the country. As well as the standard Chicago deal of "light and flexible teaching loads defined by … research interests," Stocking also negotiated for free tuition at any university for his five children and that he would only teach for one quarter before being allowed to skive off to be a visiting fellow at King's College, Cambridge. Further opportunities (all before he had written a single monograph!) then came apace: visiting professor at Harvard; a year at the Center for Advanced Study, Stanford; a Guggenheim Fellowship. Only after he was promoted to full professor did his first proper book appear, in 1987. Victorian Anthropology was a truly grand, ground-breaking study, rewarding the faith of the committee that granted him tenure on the strength of its imminence a full twenty years earlier.

Thenceforth honors accrued. Stocking was a Getty scholar; he was elected to the American Academy of Arts and Sciences; he was named a Distinguished Service Professor; he spent a year at the Institute of Advanced Study, Princeton; he was awarded the Royal Anthropological Institute's Huxley Medal (the year after Mary Douglas).

It took Stocking over ten years to write Glimpses into My Own Black Box. Admittedly, he was in a protracted dispute with a deteriorating body. On the other hand, he was a retired academic with no other duties who nevertheless still retained one of the best offices in the department, still had the support of research assistants, was a Mellon Fellow for four of these years on the strength of the autobiography—and for the remaining six or more years somehow managed to make due merely with the support of the Lichstern Fund.

Stocking's memoir is both blessed and blighted by his candor. There are endearing moments in which academics will be able to recognize themselves. To wit: "I spent a month after our arrival in Berkeley writing the first lecture, two weeks writing the second, a week writing the third, and after the term began managed somehow in the intervals between twice weekly lectures." His retirement was partially prompted by wearying of dealing with ahistorical, glibly postmodern undergraduates. On the other hand, although all of us would like to explain to the world why some passing, anonymous remark about our work on amazon.com has not done it justice, most would judge that restraining oneself would be the more excellent way.

Perhaps not unrelated is his inability or unwillingness to separate the wheat from the Ben & Jerry's ice cream that will soon be past its sell-by date. The Stocking papers in the Special Collections at the Regenstein Library, University of Chicago, we are reassured, will eventually also include his album of Granddaddy Stocking's Christmas Stockings. Still, one can always pass quickly by the gag gifts until one hits upon a found treasure such as his insider's account of the Derek Freeman/Margaret Mead controversy.

George W. Stocking, Jr.'s other magnificent monograph is entitled After Tylor (1995). Despite his open anxieties to the contrary, the field of the history of anthropology is not in danger of being fittingly thought of as After Stocking. As this is all the immortality he seeks, he can listen contentedly Through the Night.

Timothy Larsen, McManis Professor of Christian Thought at Wheaton College, is the author of Crisis of Doubt: Honest Faith in Nineteenth-Century England (Oxford Univ. Press). His A People of One Book: The Bible and the Victorians will be published in January by Oxford University Press.