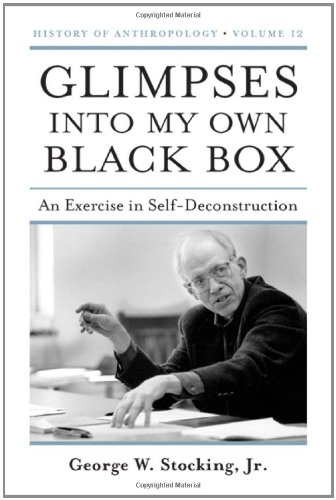 Glimpses into My Own Black Box: An Exercise in Self-Deconstruction (Volume 12) (History of Anthropology)
George W. Stocking Jr.
University of Wisconsin Press, 2010
168 pp., 24.95

The foremost historian of anthropology turns his gaze on his own history.

George W. Stocking, Jr., is the greatest historian of anthropology that there has ever been. Moreover, given his unique situation as resident historian in a leading anthropology department, it is hard to imagine his preeminent position ever being surpassed. In a discipline steeped in its own stage-managed mythology, he championed the pioneers and later practitioners whose lives and work had been quietly erased from the then-current, self-serving accounts. With a perfectionist's pursuit of exhaustive and detailed knowledge, he denounced the "presentism" of existing historical narratives and restored to the record all the grubby connections with colonialism, intellectual cul-de-sacs, and slain fathers.

Now an octogenarian in declining health, he has published what will surely be his last book, an autobiography entitled, Glimpses into My Own Black Box: An Exercise in Self-Deconstruction. If the clunky title is not already sufficient proof, it should be said that it is not a literary achievement. The prose is greased with clichés (Stocking's memory, we are repeatedly warned, is "like a sieve"); words are merely there as rigged-up piping so that facts and ideas might spurt out the other end. Indeed, it is in no sense a good book qua book. Nevertheless, Stocking has lived a compelling life and has been on location in time's square for historic events. One of his latter-day hobbies, readers are informed, has been making wall decorations out of found objects, and in the chaotic pile that is Glimpses into My Own Black Box one repeatedly hits upon keepers.

They are, however, tucked amid the clutter. Reading this book was reminiscent of attempting to do an oral history with an uncle who had lived through the D-Day landing, but whose conversation tended to revert to everyday banalities. We learn that Stocking still remembers fondly a cherry strudel that his wife's cousin made in the early 1980s. The last part of this book reads like a blog. We are told on three separate occasions that when he cannot sleep he listens to Through the Night on the radio. There is an unilluminating rant about current American politics. There is a whole series of photos that one would only normally inflict upon relations (being amused by a Christmas gag gift of a halo, enjoying touring the Ben & Jerry's ice cream factory, and so on). Toward the end, Glimpses into My Own Black Box embarrassingly turns into a book about writing this book, complete with a photo of the author looking at the proof sheets.

Stocking has made a conscious decision not to be an imitator of Christ, and one of the more subtle manifestation of this is that he serves the best wine first. The book begins with an intoxicating vintage poured from his FBI files. As a Harvard undergraduate, he became committed to leftist politics, and from 1949 to 1956 he dedicated his life to serving the Communist party. As Stocking quietly observes, the McCarthy era "was not a propitious time to be a Communist."

With an admirable willingness to sacrifice for his convictions, Stocking threw himself into full-time manual labor jobs for seven years as suitable places from which to radicalize the workers and rattle the capitalists. Stocking's most strategic plant, as it were, proved to be in a meat packing company. He was eventually elected chief shop steward and was so successful at his covert aims that one of the owner's conditions for the strike settlement was that Stocking be barred from any union position.

A growing awareness of the dark side of Communism deprived Stocking of his mission in life. As a teenager he had wrestled with Christianity and parted ways (though one can occasionally observe that the encounter left him limping). Reading The God That Failed revealed to him that Communism had been his religion during those seven years. (Evangelicals of his generation might recognize themselves in his dutifully going door-to-door sharing his faith.) His father's triumphant career culminated with his being the head of the Economics Department at Vanderbilt University (his Wikipedia entry is much longer than that of his namesake son—the word "oedipal" recurs at least a half dozen times in this book). Stocking therefore chose to fall back upon his "liberal academic patrimony." His early fondness for the working man makes me postulate that sometime during his youth he must have shaken hands with a chimney sweep.

How else can an envious academic account for the following career? As a high school student, Harvard was the only university to which Stocking bothered to apply. (He was accepted.) As an undergraduate, by his own account, he frittered away his time on pinball, poker, and politics, resulting in his descending into academic probation on an annual basis. He only graduated, he tells us, because he cajoled a professor to inflate a deserved F to a passing grade for no other reason than that it would help a chap out. And later, after his disillusionment with Communism, he was immediately accepted into the graduate program in American Studies at the University of Pennsylvania, even though he had been working blue-collar jobs for years.