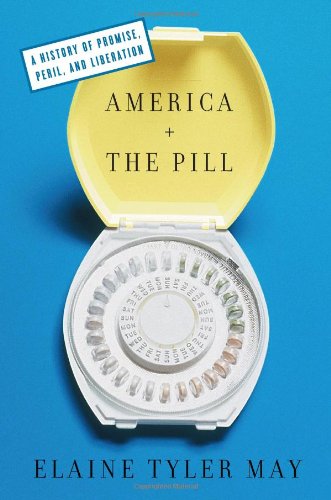 Readers intrigued by Elaine Tyler May's April 24 New York Times op-ed "Promises the Pill Could Never Keep" will want to pick up her fascinating short history of oral contraception (which turns 50 this year, and which is "the leading method of birth control in the United States"). In the book as in the op-ed, May considers all that the pill did not do. Its promoters had imagined it would curb population growth and thus end world poverty; and that it would so drastically improve marriages (eliminating unwanted pregnancies, increasing the carefree delights of the bedroom) that no one would divorce.

What did the pill actually accomplish? May argues, persuasively, that "the pill had its greatest impact within marriage." That is, the central legacy of the pill is not widespread non-marital sex (in fact, May finds that during the heyday of the sexual revolution, most unmarried women who were having sex were not using birth control), but rather non-procreative marital sex. Some men, it turns out, were anxious about the ways oral contraception changed their marriages. One "expert" warned that after a long day at the office, the American man was "mentally and physically spent—in no mood to satisfy his newly libidinous, pill-taking wife."

America and the Pill is not wholly celebratory, but readers looking for a sustained discussion of the pill's underbelly will not be satisfied. May rightly considers the many ways the pill has benefitted women, and America as a whole—by, for example, making it possible for women to pursue educational and professional opportunities that would be virtually unthinkable without reliable birth control. But the pill's half-centenary ought to prompt, as well, a more searching discussion of the dark side of all this choice, a more searching discussion of the question "What has our belief that we can—and more to the point, should—manage and even control fertility cost us?"