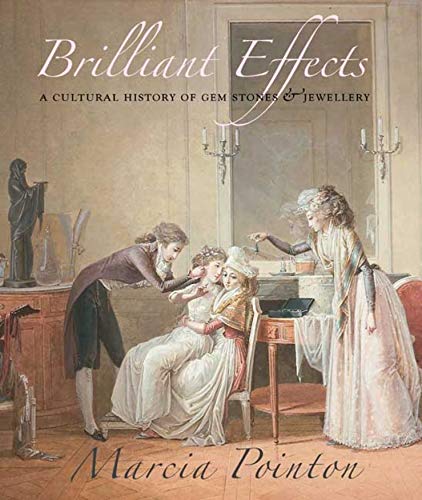 A cultural history of gem stones and jewellery.

In Brilliant Effects, Marcia Pointon traces the history of jewelry (as we Americans tend to spell the word) and gems, primarily in early modern and modern England. She explores the economics of jewelry, and the cultural and social meaning people assign to gems and jewelry. Pointon is interested in jewelry itself, and also in jewelry as metaphor. There are plenty of analyses (and images: the book is lavishly illustrated) of diamonds and gold and garnets, but, for my money, one of the most engaging sections is Pointon's treatment of mourning jewelry, which has often been overlooked by jewelry historians because it was mass-produced.

Pointon is particularly interested in hair jewelry—jewelry that featured or was indeed made from the hair of a recently deceased friend or relative. Hair jewelry, she argues, kept the death of one's beloved in plain view, and yet, insofar as hair resists corruption, the same bracelets and rings rejected or refuted death. Religion threads throughout the narrative, as when Pointon describes English Protestants' criticisms of bejeweled Catholic shrines in Italy; English travelers saw the jewelry as "dead wealth," and, in a familiar polemic, they contrasted the value of the jewels with the immense poverty visible on Italian streets.

The prose can be a bit dense: for example, "one can identify here a politics of the artifact—in which the appropriation of jewels works as agency in conflicts of ideology—and a politics of viewing that relates specifically to European post-Napoleonic détente and the question of conflicting interpretations across a Catholic-Protestant divide." But it is worth pushing through the academese, for this book is brilliant cultural history, indeed.