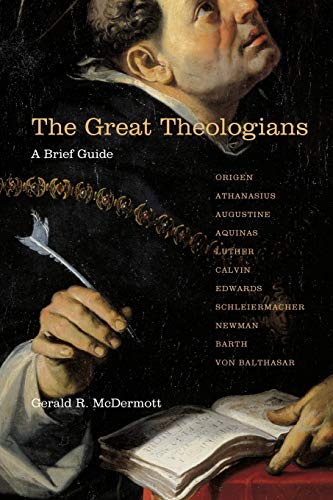 From Origen to Barth: eleven theologians you should know.

Compared to David Letterman, who has made a comic career from lists made up of "ten whatevers," Gerald McDermott's attempt to do something of the same with eleven theologians is not particularly funny. It is, however, of much, much greater long-lasting significance. McDermott's "great theologians" include three from the earliest Christian centuries (Origen, Athanasius, Augustine), one from the Middle Ages (Thomas Aquinas), three classical Protestants (Luther, Calvin, Edwards), two 19th-century giants (the very different F. D. E. Schleiermacher and John Henry Newman), and two from the 20th century (the surprisingly similar Hans Urs von Balthasar and Karl Barth). Each chapter offers a biographical sketch, a brief outline of major contributions or controversies, some evaluation guided by evangelical norms but uniformly charitable, a lengthy quotation from the theologian, and closing bibliography and questions for further study.

The book works well as an introduction to those who have newly become curious about the riches of Christian thought, but also as an excellent refresher for pastors or other ministerial professionals who may have dozed through some of their church history classes. All readers at whatever level will benefit from engaging first-order thinkers as they wrestled with the tough issues of their own day, especially for recognizing why that wrestling left its mark on later centuries—whether Athanasius on the meaning of Christ's incarnation, Edwards and von Balthasar on the "beauties of holiness," Luther and Calvin on justification by faith, or Aquinas and Newman on God's sovereignty over nature (Aquinas) and history (Newman). Since all of these theologians, in their own distinctive ways, were deep students of Scripture, McDermott's clear introductions open up vital issues for biblical study as well. This book achieves the same level of success as a primer that Fergus Kerr's similarly formatted Twentieth-Century Catholic Theologians (2007) does at a more intentionally advanced level.