On the track of an Italianate gentleman.

Yes, it was a grand time, wasn't it? And how is it that those few days near Russell Square—and from there, various wayward points—already seem to have receded so quickly? London is becoming again just another city: sometimes visited and, between visits, only barely present in the mind. Or a city seen as through water. "Let London in Thames melt, and the wide arch / of the rang'd empire fall," Antony might have said in Shakespeare's play, if the speaker were not Roman and if the line scanned better. (If Antony were speaking now, he could have meant Marble Arch; forgive me, but I am now imagining Marc Antony—puzzled by trousers perhaps—as he shops in Selfridge's, the department store close by that arch. I must stop. Finis.)

Perhaps in these letters we'll be able to revisit, as it were, a few places or topics recently encountered, before they vanish, wordless, into the back alleys of memory. Or better yet: back into the darkened pathway of St. Bartholomew's Close, just down from your numinous Great St. Bart's and the hall of the Worshipful Company of Butchers.

First, I couldn't agree more about the importance, or at least your and my occasionally manic enthusiasm for, the British Library. It seems to be thriving in its new or relatively new location, several blocks north of the British Museum. Over the past few years I have certainly appreciated the study-friendly reading rooms and the efficient way one can get registered (even if jet-lagging, nodding off as you order up first items) and can then take a first crack at rare books the very same day, if wished. And like you, I really admire the building design itself. For a book nerd, the red brick, metal-red detailing, green awnings, and red-and-white checked pavement all make me think of Christmas: books, maps, manuscripts, awaiting their readers and perusers in the rooms within. In your linked photo of the library, the Newton, After William Blake statue is prominent, as it should be, occupying a noticeable place in the library courtyard. One online commenter says "it is easy to walk straight past it." Is that your experience at all? Not mine.

That oversized sculpture by Edoardo Paolozzi, of Isaac Newton bent over his compass, an image taken from a 1795 print by the poet-engraver Blake, always makes me a little giddy as I approach the library's front entrance. Paolozzi chose this image because it fused two strands of English genius: Newton's scientific discoveries with Blake's visionary art. Newton also captures the ambivalences of scholarship and knowledge, or small parcels of knowledge that eventually diminish the fully human experience. In Blake's original setting, Newton is at the bottom of the sea. He is obsessed with his geometrical swath front and center, but utterly unaware of the vast natural world surrounding him. He may be all mind, but there is also something resembling the divine within the figure. Newton hunches over the world with his measuring instrument, akin to God the author of the Book of Nature. Anyway, I've always found the statue to be a cool, fitting landmark—Newton as academic sentinel guarding the library's holdings, with a little allusive dash of mad Blake's lyric spirit to keep us readers, we hope, from taking ourselves too seriously.

You also mentioned the library's somewhat incongruous location along bustling Euston Road, just east of the Euston rail station and adjacent to the St. Pancras and King's Cross stations. A youth hostel, a Pizza Express, and the Euston Flyer pub are more lively venues across the street. Have I shown you this photo of the library? 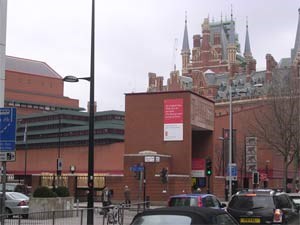 Not as close up as yours, it is taken from the busy street beyond the courtyard, so that one of the "enormous toy buildings" you spoke of, St. Pancras, rises behind the steadfast-looking library with a turreted whimsy, kind of like a mischievous sibling making faces at an older sister's recital. I hadn't noticed before the cranes beside those flamboyant towers, but seeing them in their gaunt, monotonous industry, they strike me now, like Newton, After William Blake, as suitable symbols for the scholarly activity taking place below.

Lest I sound disparaging, let me quickly add that I was keen to undertake my own modest research during our few days in the city. I was interested in the writings of an English Renaissance traveler named William Thomas, who has intrigued me since I first wrote about him a few years ago. He is often grouped with other "Italianate gentlemen," but his life, circumstances, and allegiances were uniquely complicated, as were his religious beliefs. As you well know, Alan, confessional matters during this turbulent time of religious revolution were almost always far more complex than we usually imagine them today, with our simple "Protestant/Roman Catholic" toggle. Anyway, thanks to reformist chroniclers, William Thomas was long known as a "hot gospeller" who traveled to Italy to escape the Catholic oppression of his boss, Sir Anthony Browne. (Browne served Henry VIII at court as Master of the Horse.)