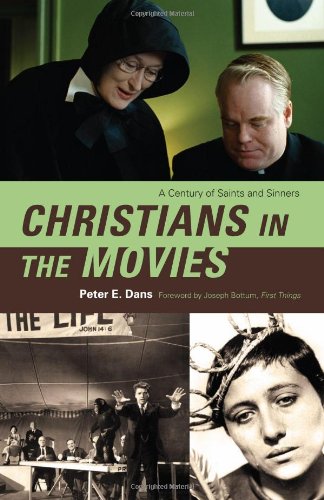 Believers on the Big Screen

A survey and critique.

Early in Alejandro Gonzáles Iñárritu's film 21 Grams (2003), a Pentecostal convert and ex-con named Jack (Benicio del Toro) sits at dinner with his wife and young son and daughter. The boy hits the girl in the arm. She whines. Jack glares at her and says, "Hold out your other arm, and let your brother hit you." When the girl refuses, Jack lurches across the table, grabs his daughter's tiny limb, and recites, "Whoever slaps you on the right cheek, turn the other to him also." Jack looks to the boy: "Hit her. Don't be afraid. Hit her!" The boy obeys, only to have Jack smack him. "There's no hitting in this house, understand?"

Jack is one of many depictions of Christians behaving badly in Hollywood, where severe religious faith almost always equals severe hypocrisy. Jack's retributive grasp of Jesus' teachings will come to haunt him before 21 Grams is over, and indeed one reliable aspect of contemporary films about Christians is good ol' narrative wish fulfillment: like all movie villains, bad believers get what's coming to them in the end.

Peter Dans does not mention 21 Grams in Christians in the Movies: A Century of Saints and Sinners, an encyclopedic and chronological overview of Hollywood's Christian characters from 1905 through 2008. But Dans says the book was inspired by a spate of films over the last decade or so that show Christians acting brutally, including The Shawshank Redemption (1994), with its Bible-thumping, murderous prison warden, and Primal Fear (1996), with its "complete trashing of the Catholic Church." It's curious, then, that Dans overlooks movies such as Cape Fear (1991), A Few Good Men (1992), Seven (1995), Escape from L.A. (1996), Contact (1997), Frailty (2001), and, more recently, Lakeview Terrace (2008) and The X-Files: I Want to Believe (2008)—movies whose depiction of cruel Christians is pronounced and (in some cases) complex enough to warrant attention in a book like this one. Dans also misses a chance to comment on Amistad (1997), Steven Spielberg's slavery film, which is infused with religion; The Big Kahuna (1999), an earnest examination of evangelism-as-sales-pitch; and You Can Count On Me (2000), which subtly captures a type of modern mainline Protestant ministry that has given up ministering.

To Dans' credit, however, he does not miss much else. Dans is a physician and professor by trade, and a man of good film taste by a lifetime of cultivation. The longtime writer of a movie column for the Pharos journal and author of Doctors in the Movies: Boil the Water and Just Say Aah, Dans is a true cinephile. If he hasn't watched some of the films on his topic that I care about, he has watched many more besides—approximately 200 titles are covered in this volume, from the silent era right up to 2008's Doubt. Each entry features a plot summary and brief commentary from Dans on how a film fares in its treatment of Christianity. We hear a fair amount of grumbling about Hollywood's "ridicule of organized religion, especially Christianity," but Dans also enjoys highlighting films that handle the faith with sympathy or ingenuity, from mid-century Bible spectaculars to made-for-TV gems that you probably missed. (Remember The Scarlet and the Black [1983], with its fine performances from Gregory Peck and Christopher Plummer? Me neither, but it's in my Netflix queue now.)

I was thrilled to learn about Stars in My Crown (1950), an overlooked masterwork from Jacques Tourneur, the director of the noir classic Out of the Past (1947). Dans says the chance to call attention to Stars was a primary inspiration for his book, and now I know why: the film delivers a stirring tale of pastoral care in the face of racism and violence. In fact, Dans inspired me to catch up on a lot of films I'd neglected, such as Alfred Hitchock's I Confess (1953) and all of Luis Buñuel. Dans packs his chapters with tons of information, including mini-essays that historicize cinematic and cultural developments, institutions like the Catholic Legion of Decency, and directors like Buñuel. These essays are delivered in Dans' frank style, and his writing is enjoyably informed by a lifetime of learning. The Buñuel essay, in about 500 words, offers a quick bio, points of distinction about Buñuel's early work, and a closing suggestion that Buñuel's tortured persona, forged by a rough Catholic upbringing, resembles the narrator of Francis Thompson's poem "The Hound of Heaven," which Dans reprints in part. My copy of Dans' book is already tattered and marked up.

As interesting as the book is in its details, however, it offers little assistance in stimulating Christians to reflect on what all these films are up to. Instead, it reinforces a general defensiveness toward Hollywood's treatment of believers. Dans is fond of films that were made under Hollywood's Production Code, a set of moral rules for filmmaking followed by the major studios to varying degrees from 1930 until a rating system was established in 1968. Dans, along with First Things editor Joseph Bottum, who contributes a forward, praises this era for its artfulness in addition to its regard for moral decency and respect for religious and governmental institutions. Dans is not wrong to assert that "many of the most respected films in movie history were made from the 1930s to the 1950s," but it's actually a complicated claim—the Production Code corresponded to "The Golden Age of Film," but it was hardly the only creative condition of that age. One canard of Code-era celebrators is that the moral restrictions improved the creative process by forcing filmmakers to tell good stories rather than dwell on sex and violence. That might seem right when you're watching Turner Classic Movies, but the era produced its share of junk. And while it is true that, as both Bottum and Dans declare, the pleasure of 1934's It Happened One Night is that Clark Cable and Claudette Colbert go to great lengths not to sleep together, that's also the pleasure of today's ongoing Twilight series. (There, a vampire has to distance himself from his lover so as not to kill her.) The latter is not the aesthetic equal of the former, but Twilight scribe Stephenie Meyer did not need the Production Code to inspire a similar moral conceit.