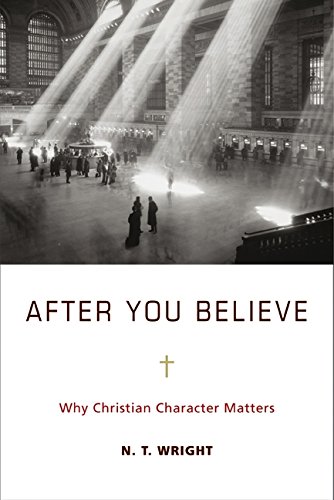 After You Believe: The Forgotten Role of Virtue in the Christian Life
Zondervan
HarperOne, 2010
304 pp., 35.36

Tom Wright is  well-known for insightful theories about Judaism that are swiftly developed so we gain fresh and enduring insights into the New Testament. He has  brought into the field of play ideas like this: that Jesus' kingdom vision and mission were about the "end of the exile," that the apostle Paul's understanding of justification was not so much about personal redemption as about Gentiles being included in the people of God alongside Israel, and that Paul's gospel message itself was, in the very core of that message, about Jesus as Lord (with the anti-imperial cult implication being that Caesar was not). Wright, then, has been at the center of the Third Quest for the historical Jesus, the New Perspective on Paul, and now the "fresh" (anti-empire) perspective on Paul.

Each of these scholarly but always readable and digestible proposals enters into the field of academic and pastoral theology as credible because each of these perspectives emerges out of Tom's fresh studies of Judaism. Suddenly, and with the unpredictable freshness that characterizes his work, Tom's newest book, After You Believe: Why Christian Character Matters, shifts, circles round, dodges one blow after another, and contends that New Testament ethics is most like Aristotle's virtue ethics but is both something else and more than anything Aristotle ever imagined. I've brewed over this new book of Tom's, pondering it daily during my commute. At times I've wondered if he has an excessively Aristotelian view of NT ethics, but at other times I've wondered if his proposal is Jewish enough, and I'm convinced that he has successfully employed Aristotle both as foil and friend of Jesus and Paul. In other words, Wright gets it right, even if each of us will find some points to quibble with here and there.

Aristotle pondered how we get from where we are to the telos, the goal of the philosopher and citizen, which is "flourishing" (eudaimonia). We develop "character." The way to get there is through the habitual practice of virtues (arete)—courage, justice, prudence, temperance—so that they become "second nature." Wright finds the same pattern, though with entirely different substance, at work in Jesus and Paul. In so finding a virtue ethic at work in the New Testament, Wright stands against other ethical theories at work in the academy. At the same time, he insists that Christians have to wake up from the idea that we play no part in our moral transformation or that somehow in God's mystery we just become more holy or loving or virtuous; we are to avoid as well the idea that keeping "rules" will somehow get us to the goal. The romantic, the existentialist, and the emotivist movements don't line up with either classical ethics or the ethics of the New Testament, both of which focus more on our complex effort. A recurring theme in this book is that God's grace animates us but we must cooperate and strive to put on these virtues. All along, Tom is both using Aristotle and turning him on his head and inside out.

As the argument moves from Aristotle to the New Testament, I wanted Tom to bring in covenant and Torah and wisdom and the prophets to see how he would let them play out in a reformulated NT ethic. Instead, he presses forward with a narrower focus: how the same pastoral task animated Jesus and Paul. They, too, wanted to know how to get from here to there, but the "there" was completely reshaped by a temple and kingdom eschatology where we are created to be "priests and rulers." Likewise the now was reshaped by an inaugurated eschatological framework—and here we get one of Tom's best discussions of eschatology—as well as a robust theology of the Spirit, and by a set of virtues—like "following" or the Sermon on the Mount or "faith, hope and love" and the "nine manifestations of the fruit of the Spirit," all tied into the One Body of Christ. But this book isn't simply an exercise in theoretical ethical reflection. No, in what has to be seen as a pastoral theology of ethics, Wright's eighth and final chapter, called "The Virtuous Circle," puts this all on the level of what we can do in the here and now—with concrete pastoral suggestions.

Here Wright manages to tie into the spiritual formation movement in the United States in a way that may surprise Tom but will also surely surprise the likes of Richard Foster and Dallas Willard. His virtuous circle, instead of being the classical spiritual disciplines (fasting, solitude, contemplation, etc), which tend toward the individualistic, includes Scripture reading, stories, examples, community, and then practices. But even the "practices" shift from the dominating paradigm in the United States, forged by a Quaker and a Baptist, neither of whom is as Eucharistic as an erstwhile Anglican Bishop: worship, eucharist, baptism, prayer, giving (yes, giving), and public Scripture reading. I would make this mandatory reading for a seminary administration and faculty, and then I'd want to see how far it could be implemented in the curriculum and among students. Thinking of where we're headed, letting that eschatology (rulers and priests) shape everything we do now, and learning to strive with every ounce of our being toward that goal, in the energy of God's grace, could make seminaries a place of formation.

It deserves to be said: one reason so many people read Tom Wright today is because he can write prose that is flat-out captivating. Like this: in discussing love, Wright says the "English word 'love' is trying to do so many different jobs at the same time that someone really ought to sit down with it and teach it how to delegate." But those early Christians, who found the Greek word agape, "seem to have settled quickly on this word as the best available one, and they then gave it the fresh privilege of carrying a new depth of meaning in which some aspects of its previous career were highlighted and others were set aside." Vintage Wright.