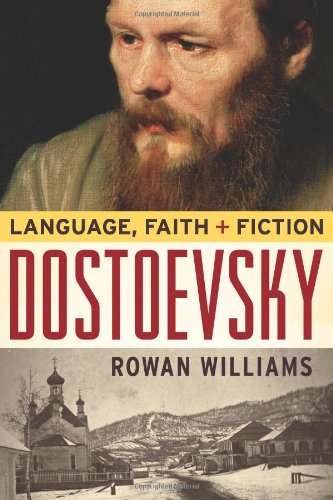 Dostoevsky in the context of Eastern Orthodoxy.

Among the works of art that one finds in the Kunstmuseum in Basel, Switzerland is Hans Holbein the Younger's The Body of the Dead Christ in the Tomb. Painted in 1521, it remains a stark, almost shocking image to this day. The dead, nearly colorless Christ lies in profile with gangrenous wounds visible in his hands, feet, and side. With a tilted head and half-open eyes, his face is turned slightly away from the viewer. The dramatic effect of the painting is heightened by the fact that it is a life-size depiction, stretching across the wall the full length of Christ's body, but with a height of no more than that of a coffin (200 cm x 30.5 cm). Moreover, the painting is encompassed by a tomb-like border with the traditional inscription that reads, in Latin, "Jesus of Nazareth, King of the Jews." Holbein's achievement is an austere representation of Holy Saturday, the day on which one cannot evade the fact that Christ died on Good Friday and before one can celebrate his resurrection on Easter morning.

This painting makes a memorable appearance in The Idiot, one of the major works by Russian novelist Fyodor Dostoevsky. In the story, Prince Myshkin, an enigmatic Christ-like figure who becomes embroiled in the lives of those he meets upon his return to Russia, encounters a reproduction of the picture in a friend's home. The painting makes a profound impression upon Myshkin, who goes so far as to suggest that it could destroy a believer's faith.

According to Rowan Williams, the Archbishop of Canterbury, who analyzes the author's life and work in his latest book, Dostoevsky: Language, Faith, and Fiction, the painting functions as "a kind of anti-icon, a religious image which is a nonpresence or a presence of the negative." As Williams explains, in the Orthodox tradition, icons confront the viewer with a direct gaze as worshippers seek to encounter the divine through the icon. Within Orthodox iconography, he states, the only figures ever represented in profile are demons and, sometimes, Judas Iscariot. Thus, it is unsurprising that Myshkin, whose own physical description is "plainly modeled on the traditional Orthodox iconography of the Savior," would be so shaken by Holbein's depiction of the lifeless Christ.

As this example demonstrates, for Williams, understanding Dostoevsky's writing requires understanding the context of the Eastern Orthodox tradition in which he wrote, despite the fact that his religious beliefs remain open to interpretation. Williams undertakes the task of exploring Dostoevsky's literary imagination primarily by investigating his four major novels: Crime and Punishment, The Idiot, Devils, and The Brothers Karamazov. Many recurring motifs in these mature works—seemingly unmotivated acts of violence; child abuse; absent fathers; the clash of cultures; the question of national identity—clearly make Dostoevsky's writing relevant today. Yet one must also recognize, Williams argues, that the world his characters inhabit and in which they move is "extensively and deeply shaped by motifs in Orthodox Christianity."

Williams believes that Dostoevsky's work is not, as it is often interpreted, ultimately about the tension between believing or not believing in the existence of God. Rather than presenting arguments for or against God's existence, Dostoevsky presents the reader with a variety of fictional characters and their changing views—including some of his own, though never in a straightforward manner—thereby demonstrating his concern "as a writer to show what belief and unbelief are like rather than either to conclude an argument or to take refuge in the unfathomables of subjectivity." Here Williams acknowledges the influential work of Mikhail Bakhtin, who argued that Dostoevsky's work is "polyphonic" in nature, containing a multitude of voices interacting with one another. Williams thus brings his insights to bear upon many of the characters and incidents within Dostoevsky's writing, including Ivan Karamazov's well-known parable of the Grand Inquisitor, the insight into the murderous mind of Raskolnikov, and the aforementioned Myshkin.

This book is the first in a new series from Baylor University Press, The Making of the Christian Imagination. Introducing the series, Williams states that "no system of perceiving and receiving the world can fail to depend upon imagination." With that in mind, the series seeks to explore some of the most creative minds that have been informed by a distinctively Christian imagination and have subsequently contributed to the formation of contemporary culture. It is fitting that Dostoevsky is the focus of the first book in this series, for his writing has deeply influenced both literary imagination and the Christian faith. Williams' examination of the extent to which Dostoevsky's Orthodox context informed his work is thus a welcome contribution to both literary and theological studies.