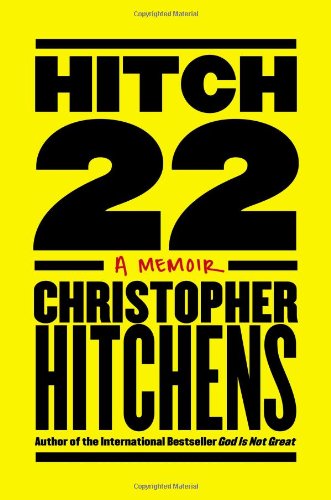 A memoir by Christopher Hitchens.

There is an elegant, even beautiful, digression late in Christopher Hitchens' memoir, which, in its several hundred pages, takes us to childhood days in Malta, political radicalization in Oxford, movement solidarity and the beginning of political doubts in Cuba, and to Manhattan, Argentina, Oregon, Beirut, Washington, DC, and many other places besides. The diversion takes us to Iraq. "I was having an oppressively normal morning at the dawn of 2007," the famed polemicist remembers, "flicking through the banality of quotidian email traffic, when I idly clicked on a message from a friend." The note led Hitchens to information about Mark Jennings Daily, an honors graduate from UCLA who went to Iraq as a soldier, despite his misgivings about the wisdom of the U.S. operation there. Apparently, this decision had been helped along by Hitchens' pro-war writings, and so our memoirist felt a pang upon learning that Daily had been killed by insurgents.

The several pages that recount Daily's thoughts and deeds, and the relationship Hitchens developed with the lost warrior's family, are appended to a chapter titled "Mesopotamia from Both Sides." In the chapter, as in most of the memoir, Hitchens recounts his long years as a man of the far Left. And Hitchens confesses that, in the era before the mass murder of September 2001, he had missed some pretty basic things about Iraq. For example, in his journalistic travels there, he hadn't quite seen that Iraqis lived in terror. But by 9/11 and its aftermath there had been a change, and Hitchens openly advocated, and continues to defend, an idea he had denounced before—the forceful removal of Saddam Hussein from power.

Words have consequences. Hitchens fleetingly acknowledges that his decades of radical musing—comprising millions of published words in, among many other venues, The Nation—helped to create an environment in which some would respond to the 2001 assaults with the feeling that the U.S. had finally got what it deserved. And then, when he took up the case for the invasion of Iraq, some readers (like Mark Daily) took that seriously, too. Hitchens, by now a libertarian, was sobered.

So, one might have thought that the reconsiderations undertaken by the sixty-year-old author of Hitch-22 would lead him to tone down a little. Through the years Hitchens has "won" so many debates arguing for points he himself now repudiates. Surely he would acquire some modesty, be a little less dogmatic, and strive not to interpret disfavored realities and people in the worst possible light? No. The Mark Daily interlude sticks out because it's gracefully crafted, but also because it's mostly free of the intergalactic self-absorption and acid that pervade what might have been a memoir of enduring value.

Is there really any point to parenthetically spitting on a long dead President Kennedy with the crisp affirmation that he was a "high-risk narcissist"? Is there nothing better to mention about Isaac Newton than that he was a pursuer of "bogus alchemy"?

To read this book is to study the Parable of the Talents upended. No one could allege that Christopher Hitchens has failed to use his notable gifts for speaking and writing. The fault lies in profligate overuse. As Hitchens tells us, he writes about 1,000 "printable" words every day. This signals a remarkable intellectual ability. It also points to a keen need for attention. Indeed, in another arresting portion of the text, Hitchens admits to a certain psychological "insecurity" which drives him to prefer argument to boredom (as if there were a dearth of other alternatives). It must be this that drives him readily to accept invitations to be placed on camera with the electronic pundits who have done so much to debase the public culture. It must be what put him on a TV stage with Bill Maher during the political campaigns of 2008 in order to admit that he felt a little "queer" for Barack Obama. It's what makes him call Mother Teresa a frightful "criminal" and Jimmy Carter a "pious, born-again creep." It's what makes him rejoice that he "finally" got a bestseller with God Is Not Great(2009), though many thoughtful people put that work aside as shallow and ill-executed. It's why he hustled together this memoir, which sees so much and observes so little. Anyway, it's difficult to take seriously a text that offers so great a quantity of unsought-for penis jokes.

The story begins grimly and evinces sympathy. The English-born Hitchens says he was rather relieved to be sent to boarding school, where he learned that words could be used as "weapons." His father, a high-ranking British naval officer, had overseen the use of actual weapons against Hitler's forces during World War II. Hitchens is proud of that, but he seems to wish that his reticent dad had spoken to him a little more. His father's silence was one reason his mother, who always hid her Jewish heritage, bound herself to an insane lover and, with him, committed suicide. Before then, two of Christopher's prospective siblings had been aborted. Another sibling that made it through, a brother, is hardly mentioned in the text except toward the end, and then primarily in terms of political disagreement. In these pages, Hitchens writes often of dear friends—"our dear friend Anthony Holden," "my beloved friend Christopher Buckley," "my dear friend David Rieff," "my dear friend and colleague Jeff Goldberg"—and also of ex-friends, but not much of friendship itself. As for his own offspring, Hitchens acknowledges that he was pretty much an absentee father. But he never missed a deadline.