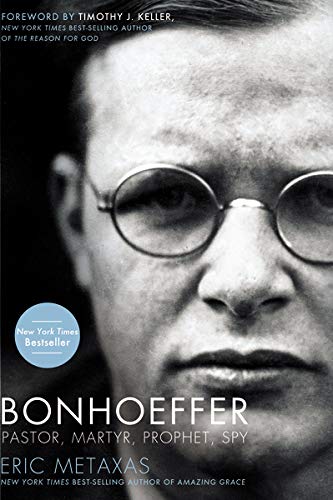 A decade ago, Christianity Today published a list of the ten best religious books of the 20th century. Dietrich Bonhoeffer's Cost of Discipleship came in second, behind only C.S. Lewis' Mere Christianity—a measure of Bonhoeffer's standing among contemporary Christians, and evangelicals in particular. And yet until now, American readers have lacked an account of Bonhoeffer's life that is both thorough and engagingly readable, a book that captures the full sweep of his remarkable story and highlights its meaning for us today. In Bonhoeffer: Pastor, Martyr, Prophet, Spy, Eric Metaxas has given us just such a book.

Library shelves are already loaded with studies of Bonhoeffer from every conceivable angle. In The Bonhoeffer Phenomenon: Portraits of a Protestant Saint, Stephen Haynes argues that Bonhoeffer fits the criteria for a saint, while Craig Slane has written a monograph entitled Bonhoeffer as Martyr. But for the television and movie-soaked American evangelical, perhaps Bonhoeffer's appeal can be explained best with the term "hero," in the "Entertainment Weekly All-time Coolest Heroes in Pop Culture" sense: James Bond, Superman, Spider-Man, Jack Bauer, Batman, etc. An intelligent, courageous, romantic figure faces stark choices as the world is threatened by a ruthless evil that perhaps only he has the power to stop.

Bonhoeffer was a German pastor and theologian who joined the Nazi intelligence service so that he might travel abroad and covertly plot the overthrow of the Nazi regime. Meanwhile, he wrote critically acclaimed prose, lost his professorial position at Berlin University for his convictions, opened a secret training facility for young pastors, and fell in love. In the end, his story took a tragic turn: he was captured, imprisoned, and executed in 1945.

The instinct for a good story is not new to Metaxas, whose biography of William Wilberforce served as the "official companion book" to the 2007 feature film Amazing Grace. Of course it is a subject that has been treated many times before—in a Peabody Award-winning Focus on the Family radio series, a documentary shown on PBS, and in many other formats and venues. Because Bonhoeffer's story is so inspiring, it has never lacked people ready to appropriate it. Hearing of Bonhoeffer's perilous situation in 1939, Reinhold Niebuhr, the most famous American theologian of his era, personally rallied others to welcome Bonhoeffer to the United States to escape Hitler's Germany, and a lecture tour was duly organized. (Some things change in America, but much remains the same.) Bonhoeffer ended up abruptly cancelling the tour to return to the struggle in Germany. In 1945, a memorial service held for him in England was heard live on BBC radio before his parents in Germany even knew for sure that he had died.

In 1969, Robert Huldschiner wrote an article on "The Quest for the Historical Bonhoeffer" because radicals, liberals, and conservatives alike were claiming his heroic story as an embodiment of their distinctive convictions. Haynes explains it this way: "His spirituality may be cast in traditional categories familiar to orthodox Christians (e.g., commitment to prayer, Bible reading, preaching), in more progressive terms that appeal to mainline liberals (e.g., discipleship that emphasizes peace and justice), or in quasi-secular terms suited to a pluralistic, post-Christian culture (integrity between his convictions and behavior, advocacy for human rights)." It is a rare figure who is invoked in the liberal treatises Honest to God (1963) by John A. T. Robinson and The Secular City (1965) by Harvey Cox as well as This Momentary Marriage (2009) by conservative Reformed pastor John Piper and Performing the Faith (2007) by postliberal pacifist Stanley Hauerwas.

And now we have this riveting biography, published by Thomas Nelson, with a foreword by Presbyterian Church of America pastor Tim Keller. Unsurprisingly, perhaps, Eric Metaxas gives us a Bonhoeffer who looks a lot like an American evangelical—an extraordinarily courageous American evangelical. Bonhoeffer grows up in a family with privilege, travels abroad, gets advanced degrees, teaches Sunday school, daily reads his Bible and prays, is dismissive of American liberal theology, breaks with the institutional church, is not a complete pacifist, and is concerned about abortion. All of this is accurate, and yet it may induce cognitive dissonance for readers who are familiar with Bonhoeffer's theology and Eberhard Bethge's definitive scholarly biography—readers who have repeatedly been struck by cultural differences (and perhaps also theological differences) between the way Bonhoeffer and American evangelicals talk about matters such as evangelism and biblical interpretation. Still, this new biography is a welcome and significant contribution. Metaxas keeps a firm grasp on the scholarly consensus while holding the reader's attention from the first page to the last, and his book will serve as a gateway for many people to a much fuller understanding of Bonhoeffer.

What will be the impact of this heroic tale on American evangelicals? Haynes insightfully warns us that people tend to unreflectively associate themselves with Bonhoeffer and draw parallels between their perceived enemies and Nazi Germany. In other words, Bonhoeffer's story can be misused to fuel self-righteousness. Evangelicals in the United States are not a persecuted minority threatened with annihilation. On the other hand, evangelicals are similar to Bonhoeffer in that they find themselves citizens of a militarily powerful country consisting predominantly of conservative Protestants. Like the church in Bonhoeffer's Germany, evangelicals need to seek renewal through truth-telling, accountability, education of the young, and Scripture.

Andy Rowell is a Doctor of Theology (ThD) student at Duke Divinity School.