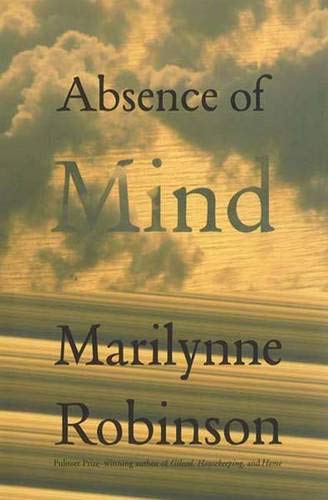 Absence of Mind: The Dispelling of Inwardness from the Modern Myth of the Self (The Terry Lectures Series)
Marilynne Robinson
Yale University Press, 2010
176 pp., 40.00

Absence of Mind collects four lectures given by Marilynne Robinson at Yale last spring for the Terry Foundation, the brief for which concludes, "… that mankind may be helped to attain its highest possible welfare and happiness upon this earth." It is the sort of objective Robinson routinely turns her hand to, acquiring for her trouble an Orange Prize, a Pulitzer, and a troop of readers enthralled by fiction shot through with grace and wisdom, not to put too fine a point upon it.

In these lectures, Robinson examines how our concept of the mind, as felt experience, determines how we understand and value human nature. In particular, she takes on the scientific fundamentalism which, now that it has proved that God does not exist and has established that the given world is a creature of accident, is prepared to account exhaustively for all the complexity and variety of reality and experience. Robinson argues not on behalf of religion here, but on behalf of the power and variety of human consciousness in the tradition of William James.

Robinson decries a prevailing notion that we have crossed some threshold which gives the thought that follows a special claim to the status of truth, that after Darwin, Nietzsche, and Freud, after structuralism and the death of God, some assumptions were to be forever acknowledged as naïve and untenable. With a perfectly straight face, she says of this threshold-crossing that, given Darwinism, one might expect an evolution of culture consonant with the evolution of nature, but alas, no, the past is left behind once the threshold is crossed, and contemporary wisdom has "leapt free of genetic inheritance." No surprise, really: "Triumphalism never was the friend of reason." "A contempt for the past surely accounts for a consistent failure to consult it." (I'm thinking bumper stickers here.)

In these essays, Robinson takes on contemporary atheists who dismiss religion in the name of science. She's not thinking here of the "good atheist": introspective, his own mind a means of understanding the human mind, his rejection of religion born of exploration of the archives of all that humankind has thought and done. Rather, this is the atheist who would have science answer. But this trump card is actually what Robinson calls parascience, with "a protective coloration that allows it to pass for science," holding forth with "facile generalizations" in "remarkably reiterative literature." The "highly questionable data" it dubs as science becomes dogma and then quickly a simple and final model of reality. Descartes proposed the pineal gland as the seat of the soul, but now we know the moral sense is situated in the prefrontal cortex. Parascience causes a "diminution of people and the diminution seems to be the project." There is no aspect of being that metaphysics can meaningfully address, so the story goes—which as Robinson notes, is its own metaphysical contention.

"In that thinly populated upper atmosphere where a phrase of Nietzsche's matters vs. where life is lived in the hundreds of millions of minds who might actualize consensus," parascience crafts "a hermeneutics of condescension." Nevertheless, this thought plays well with the television audience, what with its being scientific and all, and preachers like Richard Dawkins and Daniel Dennett may boast "the effective authority that comes with successful popularization." There is an "odd, undeniable power in defining humankind by exclusion of things that distinguish us as species." Parascientists possess the missionary zeal of the "sterilized and occluded mind." (Speaking of demurring to put too fine a point upon it.)

Robinson holds that the absence of mind and subjectivity in parascience is due in part to its having risen and taken form as a polemic against "religion," or rather a variety of religion that Robinson has not "happened to have come across" in her "perusals of the theology of the last 500 years." This is religion reduced to an element of culture and of history, made of "bones and feathers and wishful thinking, rituals and bonding, false etiologies and the fear of death." (And if we are truly fearful of anything it is of being thought fearful.) Parascience exists partly to exclude religion from making its own case in its own terms. Daniel Dennett is said to "sheer off the contemplative side of faith," which frees him to bypass John Donne and the Sufi poets and leap directly to the cargo cultists. It would be harder, Robinson says, for the parascientist to condescend to religion were it permitted to appear in the form of an afternoon listening to Bach, or one spent reading Sophocles or the book of Job.

Robinson will ask, "What if our species is more than an optimized ape?" What if "something terrible and glorious befell us?" Well, if the human mind is the most complex thing there is, if the odds against any particular person's being here are astronomical, then she suggests it might behoove us to preserve mind, and to have reverence for others with minds too, the high estimate of human nature helping to contain our worst and liberate our best impulses. In the essay titled, "The Strange History of Altruism" Robinson makes the most compelling case that right thinking on our nature matters. Her essay "The Freudian Self" gives cultural, historical situating to the way of looking at ourselves derived from Freud's model of our driving drives and all that might portend. The Freudian has foundered, but we're not done with folly yet. In the final piece, "Thinking Again," Robinson concludes, "For proof of the existence of mind, we have only history and civilization, art, science and philosophy." Oh, that.

Robinson characterizes one legacy of parascience as a dismissive shorthand, and says that as a consequence, we summarize, we do not read. We don't study original material, what people have said, what they have actually written down, the poignant, the rich, the complex. "The best way to love the world," Robinson says, is to go back to the question as close as you can, to read all around it.

The video of the four lectures is a treat. During one Q&A, when asked how the ascendancy of parascience influences literature and the humanities, Robinson says that the writers whom she teaches at the Iowa Writers' Workshop are both educated and gifted. And, she adds, they write below the level of their potential. They are influenced by their cultural ambiance. Because they have been told the mind isn't interesting or might not itself be a fount of wisdom and splendor, their work is not consistent with their gifts. When one's own thoughts are suspect, Robinson said, "There is a contradiction in the intellectual project, a hostile skepticism creeping into everything."

Robinson believes the exclusion of the felt life of the mind from accounts of reality and from thought and art extends even to theology, which has "embraced impoverishment" under secularism in order to blend into "the disheartened cultural landscape." As theology embraces parascience, it has tended to forget the beauty and strangeness of the individual soul, of the world as perceived across a lifetime, of the mind as it exists in time and in experience. "But beauty and strangeness persist, theology persists, proving real life is elsewhere," she writes. "Subjectivity is the ancient haunt of piety and reverence and long, long thoughts."

Given its tenets, tone, and yes, attitude, one can't help but wonder how the arguments of Absence of Mind will play in the parascience pubs and clubs across the land. Robinson claims the parascientists preach to the already converted. I'm thinking, pot: black, kettle: pretty much a similar color. She speaks with such authority that those in agreement will savor much her critics will no doubt pounce on with practiced aplomb. Each side must accuse the other—oh the lessons learned in schoolyard fights—of reading widely to think narrowly, and/or of not making a proper study of the things which they condemn. "She doesn't know enough science," a scholar friend opines (which given the premise of the book, one would think is rather beside the point.) But anyone who has ever attempted to reason another person into the Kingdom of God, or any other kingdom, knows the pitfalls along the way.

The scope of Robinson's erudition is stunning, and she shares it with generosity and no dissembling, which is not to say she is above the occasional generalization. Science is cast as a comparatively recent phenomena, culturally localized, difficult to distinguish from its setting, and deeply influenced by modern warfare. Parascience speaks with one public voice, albeit one diminished by its own diminishing. I'm not saying she's necessarily wrong on this latter count, I'm saying I don't think she's likely to convince those who are wrong of the wisdom of her thought.

One could wonder what might. What might make the absent mind be present? What might shrink the vast divide between science spoken and life lived, between the neat conclusions and the messy lives, speaking to the soul of the soulless, to the mind of the one without mind? If there is, as Robinson suggests, more to say to this "unhallowed and unhaunted" existence, when "the starlit world is still the world," how might it be spoken?

Let's think. What about a story of a dying preacher writing to his young son the wisdom he believes has served and will serve sufficiently for all the ages and for all eternity? (See: Gilead by Marilynne Robinson.) Or, I don't know, maybe a novel, a made-up story, about a man whose life is a train wreck and a glory, with elements of grace that lighten mind and spirit, rendering fellow feeling as the very balm of Gilead. (See: Home by Marilynne Robinson.) Truth may want slant telling after all, to quote another writer who, like Robinson, was prone to gradual dazzlings able and entirely willing to bring consciousness to mind.

Linda McCullough Moore is completing a collection of her short fiction, Final Dispositions, its title story winner of the 2010 Pushcart Prize.