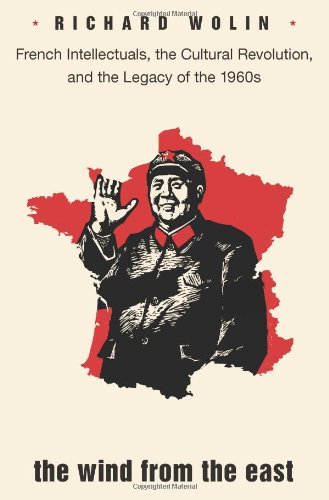 The Wind from the East: French Intellectuals, the Cultural Revolution, and the Legacy of the 1960s
Richard Wolin
Princeton University Press, 2010
408 pp., 35.00

The French legacy of 1968, idiosyncratically assessed.

"Is the life of the mind a history of interesting mistakes?" So Hugh Kenner asked in The Pound Era. More particularly, he wondered, "is the surest way to a fructive western idea the misunderstanding of an eastern one?" Something like Kenner's sense of historical irony informs Richard Wolin's interesting and curious new book. Wolin centers his attention on the Maoism that animated one influential faction of French students in the turmoil of May 1968 and gained sympathizers among leading intellectuals of the day. He freely acknowledges that the "China" these would-be revolutionaries celebrated with their paeans to Chairman Mao and his Cultural Revolution existed only in their heads; the reality was considerably more grim. And yet, he says, the long-term effects of this infatuation were clearly beneficent: "what began as an exercise in revolutionary dogmatism was transformed into a Dionysian celebration of cultural pluralism and the right to difference. At issue was a political learning process via which French youth cured itself of its infantile revolutionary longings in order to focus on more circumscribed tasks pertaining to the transformation of everyday life and the regeneration of civil society."

Wolin's book can be added to the stack of recent studies attempting from one vantage point or another to reassess "the Sixties" with an eye on current affairs. Although he acknowledges, immediately after the passage quoted above, that "French Maoism cannot take sole credit for this salutary redirection of political energies," he says just a few pages later that "the May revolt effectuated a sweeping and dramatic transformation of everyday life" in France, and that exaggerated claim underlies the entire book. Large chunks of "everyday life" (including, not least, religious experience) are simply missing from his account. Moreover, even as he is documenting the delusions of the sixty-eighters—often with considerable wit, and with a seemingly encyclopedic familiarity—Wolin grants credence to their skewed perception of the status quo in France and in the West more generally.

Disagreements and exasperations aside, I found this book compulsively readable. The history of the Sixties is a long way from being exhausted.