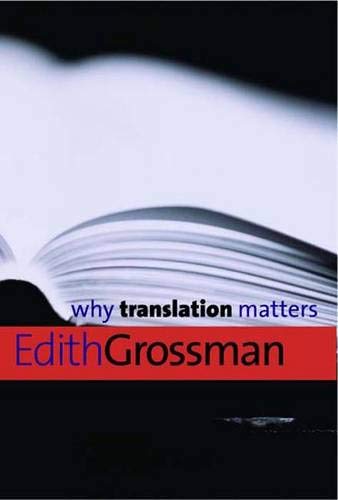 A literary translator's rather narrow view.

In this Graf Spee of a book the author has managed to wound me at every turn. Which is odd, since I'm the reviewer of her dreams. Edith Grossman doesn't know me in person, but I too am a translator, prepared to tout her virtues, overlook her peccadillos, give her book a rave without giving it a read. Alas, I opened this pocket battleship (only 153 pages with boutique paper, trim size, and one deckled edge on most but not all pages?) only to find that she unjustly accused me and book reviewers like me of "intransigent dilettantism and tenacious amateurism."

Not content with that, Grossman fired the big guns at editors, of which noble and underpaid band I've been a happy member for fifty years (Harcourt, Macmillan {American Macmillan #2}, freelance), for not aggressively acquiring translations of foreign-language books even though they don't earn enough money to justify their publication. Yet I acquired a few translations during my career, even though I knew they wouldn't pay off; other editors invested in my translations, knowing they wouldn't pay out, and indeed they didn't. So why are we in her crosshairs?

Grossman strafed editors in their lifeboats for editing after acquiring. She cited García Márquez's agony on withdrawing a heavily edited manuscript from one publisher and submitting the original to another publisher. Yet I withdrew a translation of my own weeks before publication on the grounds of editorial malfeasance and haven't found a place for it in ten years. So why has she targeted us?

Odd that Grossman should attack editors; although phrased in a fair cadence, Why Translation Matters could still profit from the good offices of an editor. May I give you a random sentence that appears early in the introduction?

Why translation matters: the subject is so huge, so complex, and so dear to my heart that I have decided to begin my approach to it by answering the implicit question with another question, using the technique of query-as-response—a traditional, perhaps time-honored method of indicating the almost impenetrable difficulty of a subject, and certainly, as every pedagogue knows, a good way to delay and even confound the questioner until you can think of an acceptable answer that has at least a glimmer of an answer.

First, this sentence might be acceptable in another language, say Spanish; in English, however, it's not acceptable. It's a run-on, even a runaway sentence, one of many in the book. Second, it indicates that the book will not present an "argument," let alone "a concise argument for the continuing relevance of an important person or idea," as the publisher, Yale University Press (YUP), promised in this and the other titles in the "Why X Matters" series. Third, the Q&A approach may seem reasonable, but in Grossman's hands it's merely cute. Her logic, such as it is, is curvilinear rather than linear. As substitutes for solid syllogisms and their unreliable stand-ins, lovely floral arrangements of words are found throughout; they are meant to say, more or less, what the author wants to say but apparently has difficulty in saying.

Grossman torpedoes publishers for bringing out commercial books only and too many of them at that. In her eyes they clutter the marketplace and cloy the public's palate for delicate foreign-language fiction just done into English. Alas, she fails to face the rude realities of publishing. First, the industry brings out just the right, precisely the right, number of books every season; some live, others die; publishers don't know which will do what. How can that be? Because publishing is a crapshoot, crystal-ball sort of cottage industry, a casino in which literary fiction translation has the worst possible odds.

Grossman disrespects "self-respecting" publishers who bring out literal (as opposed to literary or paraphrasal) translations without giving any indication that she knows they exist. I would mention Bible publishers for one. The Bible is often the first book read in the lesser languages with the newer alphabets. According to the British Bible Society, founded in 1804, more that half the world's 7,000 languages are in the queue for a Bible translation in their own tongue. Today the Holy Bible; tomorrow the national epic. At the present moment BBS has 550 translation and re-translation projects in the works. Of these Grossman doesn't have a clue, but that didn't prevent her from pontificating.

It's a small world Ms. Grossman works in, the world of literary fiction translation, but it's a rich, even elegant one, like Monaco or Vatican City, the world's smallest countries. Her holdings would seem to be vast, and she carries on as though she were principessa in the one or papessa in the other.