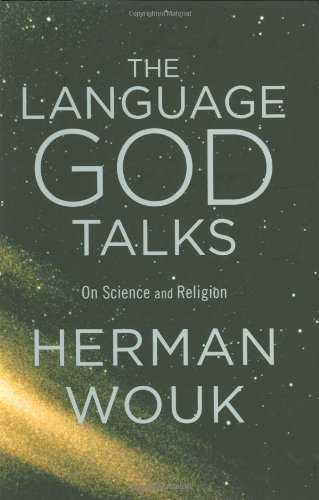 As understood by Herman Wouk.

What goes through your mind when you hear the name Herman Wouk? He's dead, isn't he? No, actually, he's not. If you are of my father's generation, you might be instantly transported to the scenario of The Caine Mutiny (book or movie or both). If you haunted used-book stores when they were still thick on the ground, you might recall the once-torrid paperback covers of Marjorie Morningstar (didn't Natalie Wood star in the film version?) and Youngblood Hawke. Or maybe you'll recall The Winds of War and War and Remembrance, late-career hits for Wouk as books, and even more popular as maxi-miniseries. If you are my age, you might easily ask Who is Herman Wouk? But you probably wouldn't hear "Herman Wouk" and think "science and religion."

Think again. A couple of months before his ninety-fifth birthday, a new book by Wouk showed up, The Language God Talks: On Science and Religion. The subtitle and the cosmic swirls of the dustjacket photo suggest that the book is about science. And it is, sort of. The Language God Talks is two parts memoir, one part NOVA episode, and one part theological and philosophical reflection—a scattered and sometimes frustrating book in which Wouk discusses his own religious journey and argues for the viability of faith in an ever-expanding universe.

Wouk sets the book up with an epigraph from Richard Feynman, the legendary theoretical physicist: "It doesn't seem to me that this fantastically marvelous universe … can merely be a stage so that God can watch human beings struggle for good and evil—which is the view that religion has. The stage is too big for the drama." Apparently Feynman's quip, made off-handedly to a prying television commentator, has "long haunted" Wouk, and he writes that, while neither of his books on Judaism can counter Feynman's statement, "I believe it's possible to disagree, and that is the main theme of this book."

Wouk utilizes Feynman's theater metaphor for the structure of his book, and he sets out to give readers a tour of Feynman's "Big Stage" and "Drama," starting with the space race, moving to the astronomers who probed the size of the universe, and moving to quick discussions on the missing link, consciousness, and the development of language. On some levels, the tour is rather underwhelming, in part an effect of the author trying to cover too many topics too quickly. Readers might learn as much about astronomy, space exploration, and geology by perusing a few Wikipedia articles.

But because Wouk lived through most of the scientific developments of the 20th century—his age becomes apparent when he notes that he was ten when the Scopes monkey trial took place—he writes with a rare excitement, especially in his chapter on the space race. He remembers the craze induced by Sputnik. He was at Cape Canaveral for the launch of Apollo 11. He tried, over a lunch, to convince Neil Armstrong to write a book on the moon landing. Further, Wouk is able to convey the humanity of the scientists he chronicles: their intellects, virtues, and deep flaws. ("Neither a theologian nor a scientist," he allows, "I tell stories.") This is particularly true of Richard Feynman, who comes across as larger than life: "Feynman sported with Las Vegas showgirls, banged on bongo drums, picked locks at Los Alamos with boyish glee, and taught groundbreaking physics in comedy-store Brooklynese." The book may be worth reading for Wouk's portrait of Feynman alone.

Apparently the author and the physicist first met in the Sixties, when Wouk was researching the Manhattan Project for what was to become The Winds of War and War and Remembrance. They met again as summer fellows at the Aspen Institute. In The Language God Talks, Wouk says he only had three conversations with Feynman at Aspen, though clearly they were quite memorable. Wouk wrote in The Will to Live On, "My lunches and long walks with Feynman in Aspen remain a treasured memory. If time and chance allow me to write a memoir of my days, that will be an experience I will enjoy recounting." Among other things, The Language God Talks is that memoir. Wouk dedicates the book "To the memory of our fathers, Abraham Isaac Wouk and Melville Feynman, who emigrated from Minsk and gave us our lives in America."

Despite this common ancestry, Wouk and Feynman took very different paths. As Wouk chronicles his own religious upbringing, studying Talmud with his grandfather weekly, he also traces Feynman's refusal to have a Bar Mitzvah, his subsequent abandonment of Judaism, and his refusal to repeat the Kaddish at his father's interment. For Wouk, Feynman is emblematic of the diminished role of faith and tradition in the lives of modern Jews: "most Jewish Babies—in Israel, in America, in all the diaspora—are born today in the world view of Feynman." This is a subject that Wouk has tackled repeatedly. In 1959, he published This Is My God, a religious autobiography of sorts that served as primer on Orthodox Judaism at a time when many were falling away the tradition. Forty years later he wrote The Will to Live On, which urged secular Jews to return to Jewish traditions and texts. Whatever his disagreements with Feynman, Wouk writes of him with a mixture of sadness and hopefulness.

But The Language God Talks is ultimately about Wouk. It is a spiritual autobiography and also, Wouk knows, potentially his swan song: "I embark here on a tour of … this child's garden of God, at a pause in my storytelling, anticipating a sure farewell at an uncertain time." Wouk has already given readers his tour of Feynman's Stage; now he must discuss the Drama and answer how he, a self-proclaimed "humanist to the bone," can maintain his deep Jewish faith and identity. Wouk spends the second half of the book giving an account of how he integrates the New (humanist) Drama with the Old (Mosaic) drama: "I gradually integrated the New Drama and the Old in my mind and spirit, as well as I ever will; not through reasoning about faith and science but by creating pictures." Wouk then presents the readers with eleven of these "pictures," or vignettes. Ten of these tell the story of Wouk's writing of War and Remembrance, a novel that focuses on the fate of the European Jews in World War II. Wouk writes that the book's main character, Aaron Jastrow, a Jewish American scholar who finds himself in Auschwitz, "is the nearest I have come or am ever likely to come to setting down in words what I believe." Jastrow's camp sermon, a meditation on Job, is included in The Language God Talks as a coda.

The final picture is an imagined encounter between Feynman and Wouk as the two men find themselves walking together to Georgetown's medical center where Feynman is presumably being treated for the cancer that would kill him in 1988 (in real life, the two never met again after Aspen). When they first got acquainted at Caltech, Feynman once interrupted Wouk and said, "You know, while you're talking, you're not learning anything." Now, in Wouk's imagined conversation, it is Feynman who listens. Feynman "asks" Wouk about his faith, which allows the latter to "speak (write) freely," briefly summing up his earlier two books on Judaism as he explains why he is Orthodox and what Feynman has missed out on by not practicing Judaism. Finally, Feynman asks Wouk about the apparent disconnect between faith and science. Feynman has chosen one; how can Wouk straddle both?

Throughout the book, Wouk wants to say there is still a place for faith. The perennial question Why am I here? can't be answered by science: "With all the stunning modern discoveries in cosmology and the biosciences, you really don't know the answer. Nobody does. Not the unbeliever, not the believer. Faith is hope, not fact." He closes the book with something of a detente between science and religion—or at least a stalemate. As their imaginary conversation draws to a close and Wouk leaves Feynman at the entrance to the medical center, The Language God Talks leaves the question unsettled.

The problem with Wouk's book is that he isn't the best tour guide of Feynman's Stage: "About science I know less than the science editors of your favorite newspaper or website." Wouk tried repeatedly to learn calculus after Feynman told him it was "the language God talks," even auditing a high school course and hiring an Israeli tutor to better his own Hebrew while learning calculus. Now he spends an inordinate number of words blaming his lack of scientific authority on his failure to learn calculus. He might have stolen a page from Frank O'Hara's playbook and called the book Why I Am Not a Scientist. Wouk is actually quite well-read in certain areas of science, but his constant claims to being underqualified serve as a distraction.

To discuss science, Wouk relies on his friendships with various scientists for credibility, and he is at pains to establish the authority of his conversation partners. Thus every scientist Wouk has lunch with is "distinguished" or a "Nobel Laureate." The name-dropping that results rivals Dale Carnegie. I counted seventeen appearances of the word "Nobel."

And because Wouk is trying to do too much with the book, it becomes extremely digressive and scattered. When he moves from chronicling Feynman's Big Stage to the Drama, Wouk jumps from a conversation with his nephew, to Confucius, to his travels in China, to his time in the navy and the writing of The Caine Mutiny. Though the anecdotes are almost always interesting, their placement and reason for inclusion are not always clear. Any creative writing teacher hoping to confound her students would ask them to diagram the structure of the book's middle chapters; one wonders if the book wouldn't have benefited from some heavier editing.

The conception of The Language God Talks dates to the 1960s, Wouk tells us (its working title was A Child's Garden of God). Initially, the book was intended to proffer an answer to "the grand Why of the child and the stumped agnostics." When he was thinking through the project, Wouk had lunch with Maarten Schmidt, the astronomer who discovered quasars. Wouk detailed his plans to write his book on science and religion, to which Schmidt then responded pensively: "It can be done … but it is very, very hard." If The Language God Talks is not up to this formidable task, the book nonetheless provides a beautiful self-portrait of a man who has sought to engage the world and his faith.

David Michael is the editor of Wunderkammer.

I only recalled Wouk's name because of the "maxi-mini-series", and I have always been slightly embarrassed that I found something made for TV so strangely resonant and haunting. It was a delight to learn more about his life and thought in this piece. This is why I read _Books & Culture_. Many thanks for this thoughtful, judicious, and illuminating review.