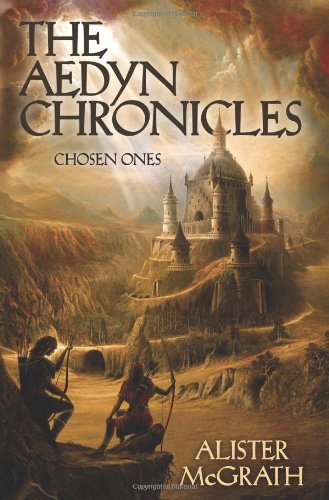 I'm a sucker for any fantasy book whose cover shows a dreamy castle tucked away in a sinister landscape. There has to be a tyrant somewhere, captive people or talking animals, and heroic fighters who will make everything right. If it's a Christian book, I've grown to expect a little moralizing that may imply that the whole thing is a parable of cosmic struggle swirling around us or some particular fight on the near horizon.

When I opened the package from Zondervan, announcing volume 1 of The Aedyn Chronicles, they had me. (Aedyn … hmm. Eden?) And the cover is magnificent. The expert Polish artist Voytek Nowakowski provided the wondrous castle-picture as well as skilled sketches for the entire book. But it was the author who really caught my eye. Alister McGrath. The Alister McGrath? Yes. This is the prolific theologian's first fictional book for children.

Here we meet two children, Julia and Peter, visiting their grandparents in Oxford, England, with lots of old books, mysterious hallways, and a magic garden. Transported through a magical garden fountain to another time and place, they find themselves in a land held captive by three hooded tyrants (the Jackal, the Leopard, and the Wolf). Soon the slaves rebel, and, thanks to the courage of the children—and the legacies recalled in their liturgies and a bit of magic—everything is indeed made right. The tyrants are exiled and Aedyn is restored; but a sequel is in the wings: the "dark power" that installed the tyrants is still on the loose.

Last summer I read the Narnia books straight through in a few weeks. It had been years—and I still loved them. That re-reading made me think about what made these books so memorable. C. S. Lewis had a way of capturing timeless adult dilemmas and profound resolutions within a narrative built for children. Which is why I found my mind wandering half way through The Aedyn Chronicles. Very young children may learn about good vs. evil or the power of courage. But the parallels with Narnia inevitably call for notice. The story skeleton is there (Peter from Oxford fighting at a castle?) but the depth and substance are missing. I will no doubt reread Narnia for the rest of my life; I wish the same were true of this series.