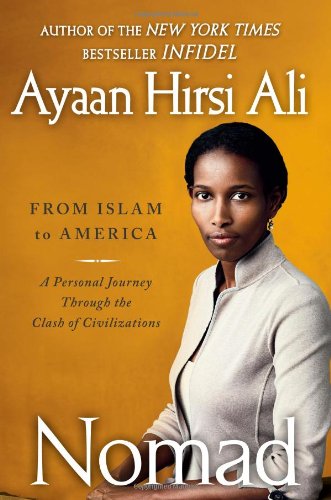 Nomad: From Islam to America: A Personal Journey Through the Clash of Civilizations
Ayaan Hirsi Ali
Free Press, 2010
304 pp., 27.00

Among immigrants aspiring to brave futures in the land of the free, few are as controversial or as mobile as Ayaan Hirsi Ali. As a child, Hirsi Ali lived in Saudi Arabia, Somalia, and Kenya. As a young woman, she fled an arranged marriage to a cousin in Canada, seeking asylum in the Netherlands. Eleven years later, she was a Dutch citizen and a Member of Parliament. By 2004, Hirsi Ali feared for her life after the murder of Theo Van Gogh, whose killer stabbed a letter threatening her with death into Van Gogh's chest. Van Gogh and Hirsi Ali were co-creators of the film Submission, Part 1, dramatizing a series of monologues portraying Muslim women who pour out heartfelt pains to God.

Following Van Gogh's death, Hirsi Ali was stripped of her Dutch citizenship, then later received it back. She traveled from safe house to safe house under security surveillance costing annually the equivalent of millions of dollars. Under the watchful supervision of bodyguards she entered America, where at first she felt rootless and lost: "To be a nomad, always wandering, had always sounded romantic. In practice, to be homeless and living out of a suitcase was a little foretaste of hell."

Hirsi Ali's first memoir, Infidel (in Dutch as Mijn Vrijheid, "My Freedom"), written with assistance from an anonymous ghostwriter and published in the United States in 2007, became an international bestseller. A collection of essays, The Caged Virgin: An Emancipation Proclamation for Women and Islam, was first published in 2006 and reissued in an expanded version in 2008. (This volume includes the script for Submission, Part 1.) And now we have Nomad: From Islam to America: A Personal Journey through the Clash of Civilizations. The new book is in part a sequel to Infidel; both carry endorsements or forwards by New Atheists Richard Dawkins, Sam Harris, and Christopher Hitchens.

Infidel chronicles Hirsi Ali's journey to atheism. But while Nomad continues to convey some of the disdain for religious faith that animated her first book, it falls short of pervasive disregard for belief in God—not least by extolling curiously construed "moderate Christians" who "do not take every word in the Bible to be the word of God. They don't seek to actively live exactly as Jesus Christ and his disciples did. They are actually critical of the Bible, which they read in their own language and have revised several times. There are parts they deem inspirational and parts they deem no longer relevant."

Nomad updates readers on relationships introduced in Infidel with Hirsi Ali's mostly estranged family members. She depicts her family as destitute, devout, oppressed by the strictures of Islam, and incessantly begging her to return to the faith. Her now deceased father, whom she refers to as "Abeh" (Somali for "papa" or "daddy"), tells her, "You must remember, Ayaan, that our health and our lives are in the hands of Allah. I am on my way to the hereafter. My dear child, what I want you to do is read just one chapter of the Quran. Laa-uqsim Bi-yawmi-il-qiyaama," about resurrection day. Hirsi Ali dedicates Nomad to a "surrogate Abeh—a friend, a mentor, a guide to American Life—with respect and love." Nomad is her paean to America, which she describes as her new home. She also warns Americans about the dangers of radical Islam, dangers she presents as systemic beyond sensational attacks perpetrated by terrorists.

Much ink has been spilled and digitalized denouncing and defending Hirsi Ali, especially her assertions about Islam. That she is a divisive figure is meticulously documented. Debate about her proposals is valuable. But this review is not about her accuracy, tact, or political activism generally. It is rather about her direct challenges to Christians, and about trying to discern another "Abeh" (or "Abba," Mark 14:36, Romans 8:15, Galatians 4:6 ) whispering through the pages of Nomad.

If memory serves correctly, I have heard several interviews in which Hirsi Ali characterized Christianity as like every other religion in peddling magical thinking, miracles, myths such as stories about dying and rising gods, and Freudian wishful thinking of a Big Mama or Big Daddy in the sky. Reading Infidel and the script for Submission, Part 1, one sometimes encounters muted versions of the devilish deity shrieking through the pages of Dawkins, Harris, and Hitchens. But at the same time, one hears holy discontent, authentic cries for justice, and sincere bewilderment at God akin to prayers by biblical sufferers like Naomi, Hannah, the Psalmist, Habakkuk, Jeremiah, Job, and Jesus as he hung on the cross.

To the extent Hirsi Ali mourns injustice and works to alleviate suffering, she walks "in the path of the prophets," as eastern Patriarch Timothy I, eager to be conciliatory, once described the Islamic prophet Muhammad to Abbasid Caliph al-Mahdi. Correspondingly, wherever she cares for the downtrodden and gives voice to the voiceless, she is "not far from the kingdom of God," as Jesus said of a wise interlocutor in Mark 12:34.