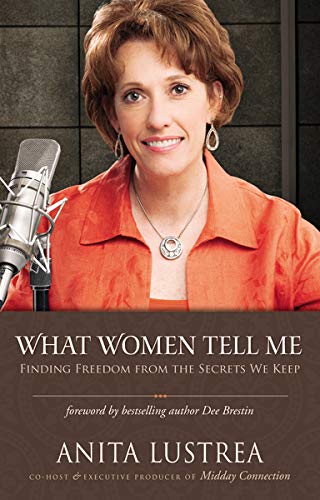 What Women Tell Me

Finding freedom in openness with others.

Each chapter of Lustrea's book touches on a different theme, offering glimpses into issues that ultimately require years to work through and digest: loneliness, finding friendship, difficulties with parenthood, domestic violence, male sexual addiction, single motherhood, divorce, and obsession with body image. (I very much wish Lustrea had touched on sexual addiction and other forms of distorted sexuality among women. This is one area the church seems yet to have the courage to face.) Meant to be read through slowly and thoughtfully (and ideally with an intimate group of close female friends), What Women Tell Me is a jumping-off point into further reflection and discussion. Each chapter ends with a set of questions to facilitate the reader's personal engagement with these difficult subjects.

By weaving her own story of desperation, self-discovery, repentance, and healing through the themes she addresses (she has struggled with perfectionism and has been divorced and remarried), Lustrea exhibits the vulnerability she espouses. Unfortunately, her narrative voice feels a bit dry and underdeveloped, and her descriptive prose can be effortful, lacking the marrow I would hope to find in such a personal account. It was hard to make out the soul in her soul-baring. Nevertheless, she calls women to find freedom in openness with others, and she sets a precedent for it.

Lustrea grew up in the 1960s and '70s, when evangelical Christians were, as she says, "very private about their spiritual lives." Apparently, even seminaries at that time encouraged students to "maintain a distance from their congregants and not to have close friends among their parishioners so that the congregation could view you as the leader and put you on a pedestal." As a pastor, Lustrea's father received such encouragement, and this attitude, of course, trickled down to Lustrea. She grew up being told by her parents that she was a perfect angel and spent most of her life attempting to live up to that status. Maintaining the illusion of perfection required her to sacrifice a depth of self-knowledge. It is against such intentional superficiality that Lustrea reacts in her book.

Based on her own experience and on the emails she receives from other women, it's clear that for some Christians there remains at least a perceived lack of freedom to communicate openly about personal trials. But I think Lustrea fails to acknowledge the growth of the church toward authenticity—for both women and men. She presents her story and the stories of others as if they contain struggles never before admitted in the broader church sphere; in this respect, What Women Tell Me strikes me as being a little late in the game.

The church at large has become more willing to address the difficult issues of weakness and shame with which we all struggle. During the past decade or more, for example, many church leaders and pastors the country over have taught loud and clear about the prevalence and power of pornography, not least among churchgoing men. It is now a given that men (married and unmarried alike) struggle with this issue, and it is talked about openly.

But this truth remains: encouragement to look honestly at ourselves and our sin—and then to risk talking about it openly with members of Christ's body—will always be in season. Exhibiting authenticity is not the same as making true confession and repentance. (In fact, some have argued that this posture of confession and transparency—under the sign of "the wounded healer," for example—has itself become a subtle device for avoiding real accountability.) I have known my own battle with body image, but simply lumping myself with the rest of the female world—aren't we all battling this?—is not enough. Reading the chapter entitled "Barbie Lives On," I gained a sense that there's more to be done with this personal knowledge and public declaration.

There's a big difference between admitting and accepting the reality of brokenness and submitting it to the Lord to be changed and used for the good of others and the building of his kingdom. Communicating about the entire process of sickness and healing is, I believe, Lustrea's ultimate ambition in writing this book. In the final chapter, she writes persuasively about the potential we all have to build one another's faith as we share how Jesus has met us in our weakness and shame. Sharing our own stories spreads Christ's gospel of transformation.

Whether you come from the bondage of superficial spirituality, as Lustrea did, or from a place of more open communication and acknowledged imperfection, as I did, the same reality surfaces: Our brokenness as Christians will not be wasted. Christ will redeem all we humbly lay bare.

Sarah Scherf writes and crafts in Glen Ellyn, Illinois, where she lives with her husband and puppy.