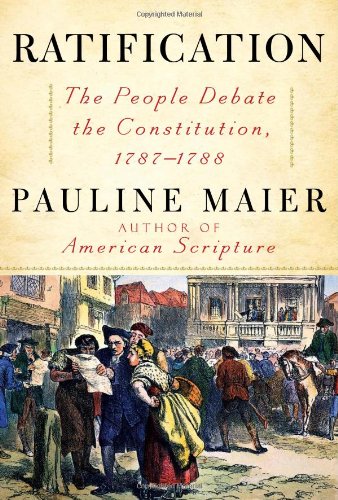 Maier's brilliant account is easily the most comprehensive history of ratification. She has scoured all the extant documents and archives in order to detail the debates state-by-state. The book is so detailed it might be too much for some general readers. Even specialists will find new revelations within Maier's winding tale of the uncertain course of ratification.

The most fascinating debate was in Virginia, where the great Patriot leader Patrick Henry (who is the subject of my next book) marshaled all of his rhetorical powers to combat James Madison's Constitution. Henry thundered "Here is a revolution as radical as that which separated us from Great Britain. It is as radical, if in this transition, our rights and privileges are endangered, and the sovereignty of the states be relinquished." He predicted that with its newly powerful commander-in-chief and authority to tax its citizens (which the Confederation government did not have), this new government would become a tyrannical empire, not a bastion of liberty. But Henry and his allies lost by a narrow margin in Virginia, as the Antifederalists did elsewhere, and America established what would become the world's longest-lasting republic.

Henry might remind us that ratification laid the groundwork for today's gargantuan government and military. But Antifederalist pressure also secured the adoption of the Bill of Rights, now considered the great shield for Americans' liberties.

Thomas S. Kidd, history professor and senior fellow at Baylor University's Institute for Studies of Religion, is the author of God of Liberty: A Religious History of the American Revolution (Basic Books).