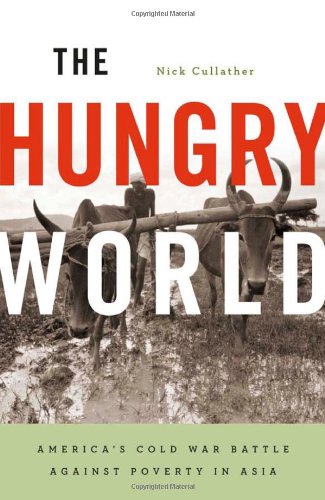 A few hours after the December 1966 premiere of How the Grinch Stole Christmas, CBS ran an hour-long special report called "Harvest of Mercy." After learning, courtesy of Dr. Seuss, that the spirit of Christmas could not be stifled by an empty table, television viewers now watched relief convoys ship surplus wheat from Nebraska to famine-stricken India. The bounty of America's farmers was saving, in Charles Kuralt's words, "an estimated 70 million Indians from starvation."

In The Hungry World, Nick Cullather explores the Cold War history of large-scale American aid projects in Asia, from dams in Afghanistan to dwarf rice to Vietnam. It is an utterly fascinating story—partially about the economics of famine, but mostly about the irrepressible postwar generation who genuinely believed American technology could win the battle for Asian hearts and minds, and stop communism in its tracks. To American donors like the Ford and the Rockefeller Foundations, to the State Department and the military, and to big agricultural research universities across the Midwest, hunger and poverty were more than moral problems: they were the geopolitical ground zero, next to which the Berlin Wall was inconsequential.

Cullather's biting sarcasm in his comment about CBS' Christmas programming should not be confused with cynicism: he is cautious and responsible, and manages to maintain an urgently moral voice through his entire book without ever growing shrill or melancholy. If the Green Revolution was actually a factor in saving Indians—either from starvation or from communism—Cullather, a history professor at Indiana University, would like to know. Instead he finds reason to doubt whether there was a famine in India at all.

There were indeed hungry Indians weathering a failed harvest that year. But famine is not the same as hunger. And in 1966 famine was an administrative category imposed on incredulous Indian officials by USDA analysts in Washington, D.C. Looking at estimates of birthrates, calorie production from Indian farmers, and similar mathematical abstractions, the USDA was able to read famine right off of their spreadsheets. The famine came as news to officials on the ground. No one was dying. They were certainly having a bad year. But the root of the problem lay with urban unemployment in India. To American observers in the mid-sixties, however, hungry Asian industrial workers were of paramount Cold War significance.

The American failure to properly interpret poverty in India lay in part in technocratic myopia, but also in domestic politics. In December 1966, President Johnson was digesting unpleasant mid-term elections that had seen a shift in political power away from the farm lobby and toward the cities and suburbs. Johnson was committed to a two-pronged strategy that made American farmers Cold Warriors: crop subsidies, which transferred taxpayer wealth from the cities to the farms, had resulted in spectacular overproduction; America's bursting granaries could be given to India, to allow Indian farms to grow industrial crops (like cotton and jute) instead of food. Indian industrial growth, in turn, would bring a kind of prosperity that is intolerant of communism. This tight logic hinged on Congress' willingness to continue to fund overproduction—a willingness at risk after the 1966 midterms. Fortunately, India was suffering a famine.

From the late 1940s on, the Soviet Union, the United States, China, Britain, West Germany, and other countries had taken their struggle for world dominance into the backwaters of Asia. Development, Cullather tells us, was the third and most important race, alongside the arms race and the space race. Rural Asia was a battleground, upon which the superiority of communism or capitalism might be proven.

And indeed, it was capitalism—not freedom, however conceived—that was meant to counter communism. More specifically, it was consumerism, a belief in televisions and motorbikes, which had become the ultimate moral category for U.S. policies. Cullather's book is filled with depressing quotes from senators, philanthropists, and scientists who conflated American freedom and American consumerism. To take one example: "In 1957, Clement Johnson, head of the U.S. Chamber of Commerce, suggested that communism might lose its appeal if 'one-tenth of the People of Asia had ever seen a Sears, Roebuck catalog,' and the Kennedy administration later consulted, unfruitfully, with Sears executives about putting the plan into action."

Somewhat astonishingly, among dozens of dreamers and doers, American Christian missionaries are nowhere to be found in The Hungry World—weren't there thousands of them, working in every field from Bible translation (and smuggling) to dentistry? Many of them, like Arthur Glasser, had been expelled from Mao's China and were much more principled of anti-communists than the botanists behind the Green Revolution. And yet, American Christianity makes no appearance here. This omission seems methodologically significant, almost as if the data did not fit Cullather's conclusions. More likely, it is because religion hardly features at all in the specialized field of Cold War History: it is not relevant to the professional discourse.