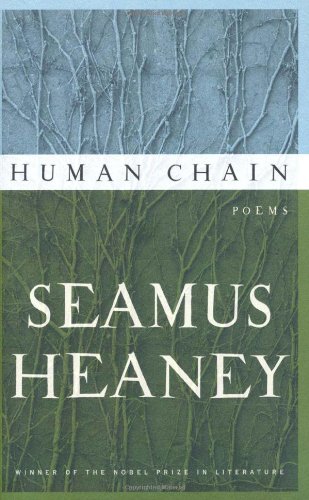 This is a book about work—about farmers and mechanics and ditch-diggers: the humanness of getting down to the business at hand—written by a poet, growing old, who feels his mortality crowding in. Human Chain is a book about men rolling up their shirt-sleeves, written by a man rolling up his trousers for one last walk along the beach.

And why not? If, in his first collection of poetry since his 2006 stroke, the 71-year-old Nobel laureate Seamus Heaney is in a retrospective mood, well, he's earned it. Memory grows thick as hope grows thin; the past feels longer when the future feels brief. That doesn't always make for great poetry, however. Good poetry, yes. Competent poetry, certainly—the man is incapable of creating less than a successfully voiced, well-constructed stanza. But Human Chain isn't "The Circus Animals' Desertion"; it isn't proof that Heaney has found the kind of late burst of creativity that made William Butler Yeats' final poems so powerful. Poem by poem, Heaney's latest volume is more reminiscent of the final years of T.S. Eliot's work—the energy a little horded, the reputation a bit preserved, the tread a tad careful. The old man on the beach rolls his trousers in part to keep them from getting wet, but also in part because his frame has shrunk and he cannot stride as far as he used to.

Heaney has given us such volumes of criticism as his Oxford lectures, The Redress of Poetry, in 1995. He's published several successful translations from Polish, Irish, Russian, and, notably, Old English, with his bestselling version of Beowulf in 1999. If we are to remember him, however—if we are to place the Irishman among the standard figures of English literature—his reputation must stand on his own poetry, the twelve books of verse he's published over the last fifty years.

So what then shall we say of Human Chain? The book may be more important, as a book, than the individual poems initially make it seem. Many of the usual Heaneyesque tropes and tricks are present in the poetry. There's the echoing play with vocabulary: a blade of grass "a-tremble," a human voice "a-waver," a field "a-hover" with insects, a boy "a-fluster." There's the fascination with particularity: a piece of farm machinery, a list of herbs, the poor box in a church, a fountain pen. There's the constant insistence on the land, the farms he knew as a child and the land he returned to as an adult. There's the voice of homespun wisdom, drawn from the countryman's knowledge of nature, even while the poems never quite arrive at any moral conclusion much stronger than doubt and ambiguity.

And there is, as always in Heaney, the avoidance of politics. Even in tranquil recollection, the poet—born in Northern Ireland but living now in the southern Republic—generally ignores the Troubles, the guns and bombs and riots. His walk through his memory in Human Chain steps over nearly every public event between the calm of his childhood and the calm of his self-proclaimed old age.

So, for instance, the title poem describes a group of people loading relief supplies—bags of meal—by passing them from "hand to hand," down the human chain. And the poet is reminded of a similar chain, loading grain when he was young. He sees now, and remembers then, the "stoop and drag and drain" of the work. And, there, the goal of the human chain: "That quick unburdening, backbreak's truest payback, / A letting go which will not come again. / Or it will, once. And for all." Which is the completion of the work, the supplies stacked up, of course. But it's also death, realized as the end of work and the end of the chain.

This theme of being passed from hand to hand continues in "Chanson d'Aventure," but this time it's Heaney himself who is carried along the chain, the poem an account of his being loaded into the ambulance after his stroke, "ecstatic and bisected / By a hooked-up drip-feed"—only to be "Strapped on, wheeled out, forklifted, locked / In position." The theme reaches back into memory, in the poem "The Conway Stewart," to latch onto a gold-banded fountain pen he received from his parents' hands as he packed to leave for boarding school. And though it marks a remembered parting, the pen recalls as well the human chain, when Heaney remembers using it to write "longhand / 'Dear' / To them, next day."

In "Album," the theme of passing from hand to hand encompasses his father's final illness: "Helping him to the bathroom, my right arm / Taking the webby weight of his underarm." And it reaches its peak in "Miracle," a poem about the biblical story of Christ's healing. Except that Heaney's focus is not on "the one who takes up his bed and walks." It is, instead, on "the ones who have known him all along / And carry him in." The human chain consist of "those who had known him all along" and who must lift the man on the stretcher to the roof and then lower him down to be healed, "the ache and stoop deeplocked / In their backs."