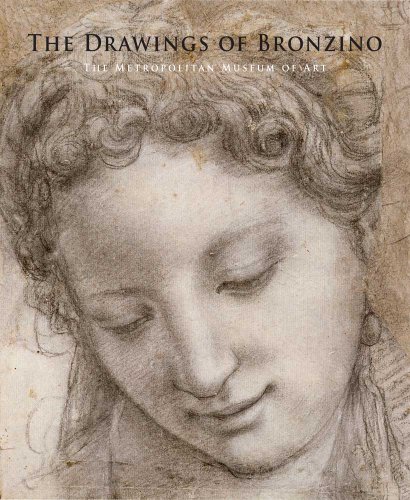 The Drawings of Bronzino

Remembering a Renaissance spring in wintertime.

It may be hard to imagine at the moment, in the grip of winter, but for one April weekend in Manhattan, or so it felt, everyone was partying like it was 1549, celebrating a convergence of Italian art of the late Renaissance: "The Drawings of Bronzino," a major show at the Metropolitan Museum of Art, and a pair of small but impressively organized exhibits at the Morgan Library & Museum, "Palladio and His Legacy" and "Rome After Raphael." I had the good fortune of visiting these three shows, and I may as well say up front—even as a penman and bibliophile—that there is no substitute for seeing such exquisite drafts and drawings in person, up close.

That said, a handsome companion book (not at all out of place beneath a Christmas tree) is now available for the most important and extensive of these shows. The Met's was the first exhibition ever dedicated to Agnolo Bronzino (1503-1572), the great Mannerist painter of the Medici court in Florence, and it brought together for the first time sixty of his drawings, the majority from the Uffizi and many never before shown publicly. Some are dashed-off sketches; others are carefully designed and completed. "AllegoricalScene of Justice Liberating Innocence," an intricate tapestry drawing on blue paper, was not added till early March, months after the exhibit opened—a sign of guest curator Janet Cox-Rearick's intent to make it as complete as possible. Although perfectly browsable, The Drawings of Bronzino shares that thoroughness. It features gorgeous reproductions and helpful critical frameworks.

Bronzino has not always received such attention, or if he did, it was of a different tenor. He either has suffered neglect, which occurred quite early when Seicento tastes swerved from his distinctive style, or has been denigrated as a decadent ne'er-do-well. For example, when in 1860 England's National Gallery purchased his famous eroticized painting, Allegory of Venus and Cupid, the curator promptly ordered that fig leaves cover the goddess's privates and the bum of Cupid, no babe here but disconcertingly adolescent. (The pair's tongue kiss, along with Bronzino's clear if secondary gift of writing burlesque verses, certainly didn't help his reputation.) And yet that same painting was worthy of Erwin Panofsky's famed interpretation of its complex allegorical meanings. Bronzino's works often seem aimed at an ideal audience, one able to appreciate both the tantalizing and the learned; in this case, the painting found an ideal first owner—the French king Francis I, who was highly familiar with both qualities. Confusions of attribution have also limited Bronzino's reputation. His drawings and paintings were often thought to be the work of his great mentor and friend Pontormo, or those of Corregio or Alessandro Allori, Bronzino's own pupil and practically his adopted son, later in life. These matters of identification, influence, and collaboration are fascinatingly on display in this monograph, which also includes readable essays on the artist's life, reception, draftsmanship, and portraits.

He often signed his paintings "Bronzino Fiorentino," and art historians regularly discuss how he conveys "Florentine-ness" in his portraits. Bronzino was actually born in Monticelli, a suburb of Florence. A butcher's son, he was so poor that he was often identified simply by his forebears' given names: "Agnolo di Cosimo di Mariano." His fellow artists dubbed him Bronzino, or "bronze one," perhaps because of his auburn hair or ruddy complexion. After some false starts serving mediocre artists, Bronzino's career gained momentum when he became Pontormo's apprentice in 1515. Allegedly his youthful likeness appears in his master's highly regarded Joseph in Egypt. There a boy sits at the foot of a staircase, with his little hat, cloak, and a large basket under his right hand (to pick up workshop supplies, maybe?) He looks tired and lonely—and understandably taken aback, since another youth stands over him, wearing bright, salmon-colored tights and a burst of red hair, like Little Orphan Annie on a bender.

For all of its artistic glories, the Renaissance Florence that the young Bronzino experienced was far different from the charming setting of E. M. Forster's A Room with a View or the tourist mainstay today. Savonarola had been burnt at the stake in the main piazza in 1498, and during Bronzino's early years, three families battled for control of the city. One ruler was deposed in 1512. At the pope's behest, the Medici family returned to power, having been expelled in 1492. Stability didn't follow. Instead, it was a time of conflicts with the papacy, imperial siege, corrupt dukes, and assassinations. And if all that weren't bad enough: Bronzino painted his first important works in the mid-1520s, when he assisted his Pontormo on a project at Certosa del Galluzzo … taken to escape the plague raging in Florence. While there, Bronzino also met Giorgio Vasari, an accomplished artist himself but best remembered for his Lives of the Artists, Painters, and Sculptors, the great biographical chronicle of Italian Renaissance Art. Vasari admired Bronzino, and said as much, but he was also his fierce competitor; both condescension and a rival's hypersensitivity inform the book's cool appraisals.