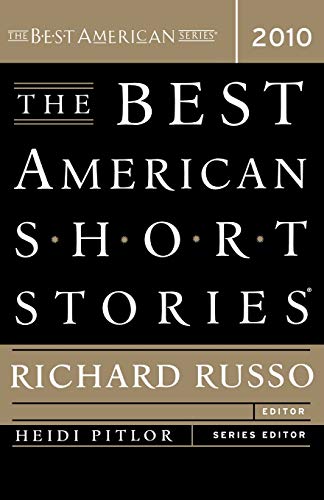 How to say the unsayable.

As a story-writer might well do, I called up The Paris Review on a recent Tuesday morning and asked the British woman who answered the phone about how many stories they turn down a year. She put me on hold. A long time. Maybe she was counting.

Fourteen thousand eighty-four. Actually I did the math myself. She said they publish about 16 stories a year out of the roughly 15,000 submitted. Lesser publications (who shall be nameless, i.e., not yours) reported smaller numbers, but the odds of a story seeing print were still on the order of one in a hundred.

So while the eternal lament is no doubt true—no one, but no one, reads short stories—a lot of people sure do seem to be writing them. With mixed results, if the stories in The Best American Short Stories 2010 are representative. If they are. One takes these things on faith.

A number of these stories are very fine indeed. They might not change life on the planet Earth, but some hint at simple truths, however much the big-T Truth might elude the teller. And some, sadly, are hardly fine at all. What distinguishes the worthy from the not, the strong from weak, seems to be a willingness to wonder. To marvel and to ponder. The stories which are most disappointing feel arduously crafted, "workshopped," whipped into shape, weighted down. Lauren Groff begins her story "Delicate Edible Birds" with a description of a Paris "covered by a dusky skin," its city arches "the curve of a throat," "the street corners, elbows," the city itself "dinless," water in its puddles splashing "into great wings," and just outside, an invading German army, "the tarry massing." That pretty much constitutes the invitation to read the second paragraph.

But my quibbles with this story involve graver failings still, ones it shares with a number of others in the collection. In each of these, it is as though the writer has a quota of vignettes and anecdotes she must fit inside one story. In Groff's case, these include the life of Hemingway's wife, Martha Gelhorn, and a story Groff once read about Francois Mitterrand, oh and for good measure, a classic Maupassant story, "Boule de Suif." The latter, in its entirety.

In the Maupassant/Groff story, a prostitute/wildly promiscuous journalist is traveling with strangers/colleagues who are held captive by Prussians/German sympathizers, who will feed and free them only if the prostitute/journalist spends the night with her captor. The strangers/colleagues, at first appalled, move finally to encouraging the prostitute/journalist to give herself for one night (What's one more man, really?) to secure their freedom. It's a good story; it's just that in Groff's telling it feels like part of a writing project. It is as though she is erecting an elaborate structure, working from outside. Groff never gets lost inside her story because she never enters in. Richard Russo, editor of this year's collection, writes in the introduction, "The best art has always had the power to seduce its creator." Here—the main character not excepted—nobody gets seduced, not the writer, not the reader.

More engaged and so more engaging is Jill McCorkle's "PS," the entire story a letter written to a psychiatrist who for $200 an hour attempted to heal the writer's marriage to an oppressively born-again husband. This is the letter that every analysand could write to every analyst, changing only the names and art work on the walls. McCorkle takes that relationship to the cleaners and does some alterations while she's there. "If I had your job," the ex-wife writes on page 14 of the letter she will not be paying to have read, "I might ask: After the nuclear disaster and you are thinking about your life, Who would you want hearing your whispers? Whose breath do you want mingled with your own? Whose flesh still warm beside you?" The letter-writer's answer: decidedly not her saved husband, who is neither parody nor caricature, but a flesh-and-blood, card-carrying misery maker, as was no doubt this letter-writing wife to him. The story holds out little hope for psychotherapy or marriage, either one, but intimates that children can be wonderful and Disney World a blast. (The ex-wife never gets so far as the husband in Jim Shephard's story "The Netherlands Lives with Water," who asks, "What sort of person ends up with someone like me? What sort of person finds that acceptable?")

More satisfying still is "Donkey Greedy, Donkey Gets Punched," by Steve Almond, in which a psychoanalyst with a poker addiction treats the world poker champ. Almond pits psychology, introspection, family history, and depressions against risk, excitement, high stakes, and real life. He pits a man against his son, against his father, against another man. And someone wins and someone loses. It's just that it is never clear which one.