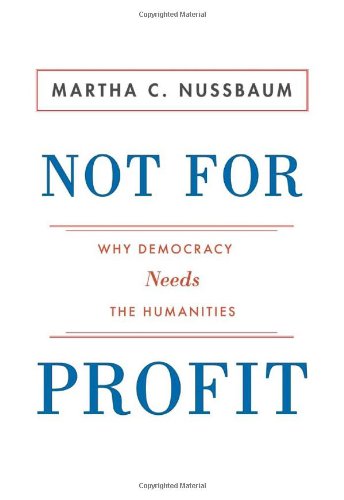 I was prepared to like, nay, love Martha Nussbaum's new book, Not for Profit: Why Democracy Needs the Humanities. What's not to love about a title that promises to argue for a humanistic ideal of education that cultivates the "moral man" rather than feeds the rapacious appetite of the "commercial man"? For years I have been reading Nussbaum's writing, but somewhere in that peculiar relationship between author and reader I started to lose that lovin' feelin.'

Her omnivorous intellect can be detected in a career of titles that began poetically and philosophically: The Fragility of Goodness: Luck and Ethics in Greek Tragedy and Philosophy (1986), Love's Knowledge: Essays on Philosophy and Literature (1990), The Therapy of Desire: Theory and Practice in Hellenistic Ethics (1994), Poetic Justice: The Literary Imagination and Public Life (1996), Cultivating Humanity: A Classical Defense of Reform in Liberal Education (1997), and Upheavals of Thought: The Intelligence of Emotions (2001). The prosaic and political turn in Nussbaum's titles coincides with my own yawning response to her work: Sex and Social Justice (1999), Women and Human Development (2000), Hiding from Humanity: Disgust, Shame, and the Law (2004), and Frontiers of Justice: Disability, Nationality, Species Membership (2006).

Because the foundation of Not for Profit was laid down in Poetic Justice and Cultivating Humanity, I would steer the reader to those books before picking up this manifesto that wears a sonorous cowbell, as Nussbaum's alarmist tone indicates in the opening paragraphs:

We are in the midst of a crisis of massive proportions and grave global significance …. a crisis that goes largely unnoticed, like a cancer; a crisis that is likely to be, in the long run, far more damaging to the future of democratic self-government: a world-wide crisis in education. Radical changes are occurring in what democratic societies teach the young, and these changes have not been well thought through. Thirsty for national profit, nations, and their systems of education, are heedlessly discarding skills that are needed to keep democracies alive. If this trend continues, nations all over the world will soon be producing generations of useful machines, rather than complete citizens who can think for themselves, criticize tradition, and understand the significance of another person's suffering and achievements. The future of the world's democracies hangs in the balance.

Since the late 19th century, debates have raged about the purpose of education. As science became a substitute for religion, the unity of truth fractured, resulting in a split between knowledge and morality. Ghettoes of academic specialization multiplied. In the 20th century, most educators had accepted the fact/value and faith/reason distinctions. Allan Bloom's polemic The Closing of the American Mind (1987) famously exposed the identity crisis. Many books have followed, all wrangling with the pathologies of late modern education. What makes Nussbaum's book stand out is her belief that "the future of the world's democracies hang in the balance," as if education is the salvation of the demos.

Focusing on the United States and India, Nussbaum observes that the trend toward education for profit, which promotes science and technology, threatens education for democracy, which promotes the humanities and arts. The former produces "a greedy obtuseness and a technically trained docility" whereas the latter cultivates "an active, critical, reflective, and empathetic member of a community of equals, capable of exchanging ideas on the basis of respect and understanding with people from many different backgrounds." Distracted by the pursuit of wealth, we are losing three abilities that are vital to the health of democracy: critical thinking, world citizenship, and sympathetic imagining. Separate chapters argue for these abilities and propose ways to achieve them in the classroom. Anticipating the objections of technocrats, bureaucrats, and scientists, Nussbaum insists that an education for democrats serves "a strong economy and flourishing business culture" by fostering innovation and responsibility.

If manifestos are written by marginalized actors on the stage of world history, such as Bolsheviks and Dadaists, this is a misnamed manifesto: it comes from the office of a "tenured radical" whose radicalism has become mainstream in academia. Few of Nussbaum's colleagues will decry her plea to encourage the democratic abilities, lest they be perceived as dogmatic, ethnocentric, and insensitive—the kiss of death for academic respectability. If there is anything radical here, at least from a traditional perspective, it is not related to these abilities, as Nussbaum would have us believe, but rather the history, pedagogy, anthropology, and teleology that props them up. I will address each one of these areas briefly.

First, Nussbaum links Socratic education to the progressive model whose luminaries—Jean-Jacques Rousseau, Johann Pestalozzi, Friedrich Froebel, Bronson Alcott, Horace Mann, John Dewey, and, with a nod to the East, Rabindranath Tagore—are all beholden to the Enlightenment project, as described by Immanuel Kant: man emerges from self-imposed immaturity through the courageous and free exercise of reason. Such a project is always pitted against tradition and authority, concealing its own "tradition without a tradition" and its authoritarian rationalism. A "hatred of dead and imprisoning traditions" inspires Nussbaum, who never once fiercely questions the blind spots of her progressivism. Socratic education can just as easily be hitched to a traditional model, which is not mentioned because, undoubtedly, she thinks its requiem has already been performed.

Second, Nussbaum fails to notice that the shrinking role of the humanities in our schools is partially attributable to pedagogy, as Gary Saul Morson points out in The New Criterion review of the book. When teachers condescendingly handle literature as repositories of reactionary values, crossword puzzles, and historical documents, Morson observes that students are driven away by "a nose for nonsense." When the pursuit of truth, beauty, and goodness is replaced by political grievances (Gender Studies, Ethnic Studies, Gay, Lesbian, and Transgender Studies, Postcolonial Studies), we do not advance humanistic education. Instead, we "nurture the feckless antinomianism that Jacques Barzun dubbed 'directionless quibble,' " as Roger Kimball wrote in Tenured Radicals.

Third, Nussbaum pushes the "clash of civilizations" inward, relying on a psychology of human development from Donald Winnicott that claims the political struggle for freedom and equality originates within each person, as competence contends against helplessness. According to this anthropology, human neediness gives rise to our solidarity or strife, compassion or disgust, solicitude or narcissism, egalitarianism or sexism. The trajectory, Nussbaum says, largely depends on the structures in which an individual develops. People behave badly in "pernicious" structures where there is no accountability, dissent, or dignity. Revealing her Panglossian faith in the supportive structures of progressive education, she believes most students in that setting, except for a few rotten apples, will behave decently. This anthropology is not only out of sync with the external world, where Islamic militancy is, in fact, harmful to liberal societies in the West, but also out of sync with the internal world, where sin vitiates human beings.

Fourth, even if we accept Nussbaum's contestable telos of education, we should ask if her progressivism is well equipped to achieve it. And the answer, I submit, is "No" for one principal reason. Lacking Augustine's grammar of love and sin, which constrain each other, her vision overestimates the possibilities and underestimates the limitations of education. Nussbaum's case for the humanities perpetuates the modern divorce between faith and reason, relegating faith to the private domain of family and church while elevating reason to the public domain of school. It assumes exclusive participation in the City of Man, ignoring citizenry in the City of God (2 Cor. 5:1-5; Phil. 3:20-21; Col. 3:2). And finally, despite Nussbaum's welcome attention to the emotional life, it views the human being primarily as a thinking thing rather than a desiring animal. Education should produce lovers and not merely democrats. To achieve this, our schools—extending the work of families and churches—will need to rightly order the affections (Augustine) and increase the power of holy attention (Simone Weil).

Christopher Benson earned his BA in Philosophy at Wheaton College, MA in Journalism at the University of Missouri, and MA. in Liberal Arts at St. John's College. He is a humanities teacher and writer in Denver, Colorado.