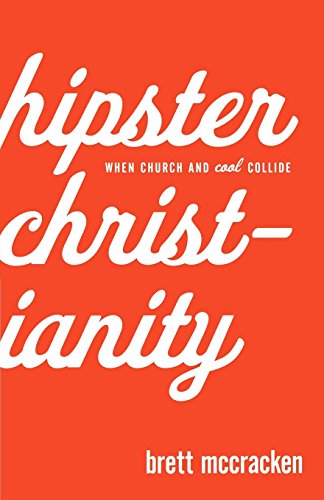 Brett McCracken, a self-described "27-year-old evangelical," is the author of Hipster Christianity: When Church and Cool Collide, recently published by Baker. An article by McCracken on the subject of his book will be the cover story in the September 2010 issue of Christianity Today magazine. And last week he appeared in the Wall Street Journal, warning against "The Perils of 'Wannabe Cool' Christianity."

In the WSJ piece, McCracken describes a panic over the prospect of young people deserting the church en masse: "baby-boomer evangelical leaders frantically assess what they have done wrong (why didn't megachurches work to attract youth in the long term?) and scramble to figure out a plan to keep young members engaged in the life of the church."

So how exactly have these frantic leaders responded? "Increasingly," McCracken writes, "the 'plan' has taken the form of a total image overhaul, where efforts are made to rebrand Christianity as hip, countercultural, relevant."

Pause for a moment and re-read this sentence with me. "Increasingly," meaning what? More so than in the 1960s, for instance? "Increasingly" as determined how (apart from McCracken's say-so)? "Increasingly" meaning widespread—so that if you are attending an evangelical church, there is a good chance that you have experienced this attempt at a "total image overhaul" firsthand? Or is it in fact highly unlikely that your church has experienced any such thing? And by the way, who are the "evangelical leaders" that have hatched this plan?

Let's move on. What ghastly forms does this attempt to be cool take? "For some," McCracken explains, "it means trying to be more culturally savvy." Not that he is against cultural sophistication, you understand. How could he be? To write a book about would-be hipsters, you have to be hip yourself, even as you are criticizing those who aspire to hipness. It's a tricky balancing act. In his role as hipster-scold, McCracken arches a brow, signaling the discerning reader: It's so tacky when your pastor "quotes Stephen Colbert or references Lady Gaga during his sermon, or a church sponsors a screening of the R-rated No Country for Old Men." Why is this misguided? Well, you can imagine a genuinely savvy pastor referencing Lady Gaga appropriately, but what you are more likely to get—so McCracken's argument goes—is a pitiful lusting after "relevance," the way pastors decades ago clumsily worked phrases like "it's my bag" into their sermon titles, to the excruciating discomfort of their young listeners.

And speaking of lusting, those frantic evangelical leaders aren't content merely to allude to Lady Gaga now and then. Nope. "Sex is a popular shock tactic. Evangelical-authored books like Sex God (by Rob Bell) and Real Sex (by Lauren Winner) are par for the course these days." Cue the indie rock band.

Wait, wait. We're talking about books … that prove what? Every workday, new books written by evangelicals (or writers with a strong affinity for evangelicals, whether or not they self-identify as such) appear on my desk. These books take up an enormous range of subjects. A few of them, yes, are about sex. And this is supposed to be evidence for some striking trend? (I wonder whatever happened to my copy of Total Woman.) By the way, why are these two books in particular said to be representative of the frantic, ill-conceived "plan" to keep young people in the fold? As I read them, Bell's and Winner's books are both deeply informed by Scripture and grounded in the life of the church.

Where is McCracken going with all this? What insight is he leading up to? This:

If the evangelical Christian leadership [there they are again, that mysterious mafia!] thinks that "cool Christianity" is a sustainable path forward, they are severely mistaken. As a twentysomething, I can say with confidence that when it comes to church, we don't want cool as much as we want real.

"We want real": The combination of pretension and naïveté in this declaration is stunning, but it is par for the course, so to speak, in the McCrackenverse.