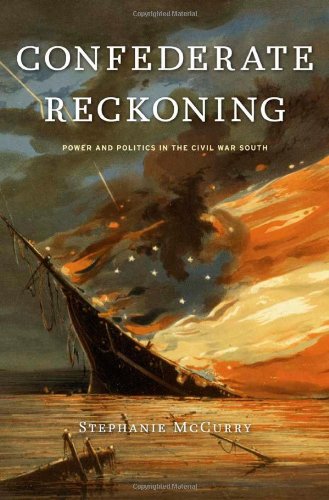 Stephanie McCurry's first book, Master of Small Worlds, argued that yeoman males in antebellum South Carolina identified with élite men because yeomen's authority over their wives was made possible by the ideology of slavery; as planter men exercised mastery over large households that included many enslaved dependents, poorer men exercised mastery over smaller households whose chief dependent was a wife. McCurry was, among other things, offering a new answer to the question of why male yeomen found it in their interest to defend, at least for a season, the slave regime over which the Confederacy went to war.

Now she has written a staggeringly smart analysis of the politics of the Confederacy—indeed, she has written one of the most illuminating and creative studies of 19th-century American political life, period. The CSA started out as a "proslavery experiment … part of a far larger struggle then being waged over slavery, democracy, and the powers of nation-states … a republic perfectly suited to … a slaveholding people … defined by slavery and the political exclusion of the mass of the Southern people." But those disenfranchised people—enslaved men and women, white women—nonetheless became political actors in the Confederacy. McCurry is interested in how war galvanized their political action. It is one thing to secede without the express consent of millions of southerners; it is quite another thing to wage a war to protect that secession without the support of much of the populace.

One example of McCurry's reading: as the war disrupted household after household, poor and yeoman white women quickly began to define themselves as "soldiers' wives." They understood that this category posited a relationship to the state: pre-war notions of women as objects of protection translated in wartime into specific obligations of the state to provide for them. The war had taken men and men's labor from their farms, and without that labor women could not make a go of subsistence farming. Their response to this crucial labor shortage took many forms, ranging from letters to their governors (insightful and moving letters) pleading that their husbands be released from military service to larger-scale, organized protest, occasionally violent. I have been waiting for McCurry's second book to be published since I read Masters of Small Worlds over a decade ago; it is a triumph of political history, and it was well worth the wait.