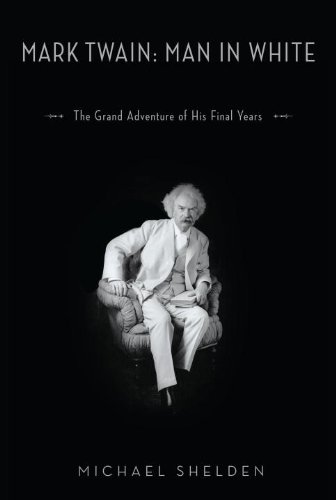 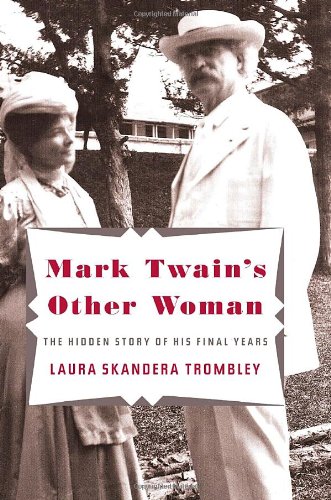 Twain at the End

Given the fact that this month marks the 100-year anniversary of the death of Mark Twain (which was, that time, no exaggeration), it is fitting to see some new books on Missouri's favorite son. (And a film entitled Remembering Mark Twain, directed by and starring Clint Eastwood, is nearing completion.) Simultaneously, cultural interest in biography, history, and celebrity, all presented in a popular and jargon-free manner, is a growth industry (à la Ken Burns, David McCullough, et al.).

With impeccable timing, then, Michael Shelden has given us Mark Twain: Man in White, an accessible and very well-written attempt to put those two facts together. Shelden sets out to understand Twain at the end of his life, roughly 1906-1910. A significant aspect of the book is Shelden's desire to present those times in a much more sympathetic manner than has previously been the case. For many years, the "dark days" thesis about Twain's last years prevailed in biographical accounts of that period. What I like most about Shelden's volume is its powerful evocation of a man full of vigor, charm, charisma, and above all humor, even in the midst of life's storms and earthquakes. The Twain that emerges here is an attractive person (generally), and the adventures of his last years provide good reading. He has weathered the death of loved ones and friends, his complete financial collapse in the mid-1890s, and his own ongoing health problems (he admitted to smoking at least five cheap cigars every day for decades, despite chronic pains in his ailing heart). And yet in a marvelous, haunting epilogue—one of the highlights of the book, really—Shelden casts a cool eye on the rather dismal exploits of Twain's survivors, in sufficient detail to suggest the great sorrow that did in fact characterize his final years. Sadly, there are no living descendents of this great American author, and Shelden's volume ends on that decisive point.

Shelden, a professor of English at Indiana State, excels not only in his portrait of Twain but also in his accounts of the scores of larger-than-life as well as petty characters in the tale. He's read widely in the primary texts, and his gleaning from dozens of newspaper accounts regularly provides the telling anecdote or the glossy quotation. He weaves it all together masterfully, animated by a detective-like curiosity that is one of the book's distinguishing traits, a zest for tracking things down cultivated no doubt during Shelden's many years as a journalist. The reader is able to look on with joy and fascination as Twain sails or plays poker with Henry Rogers, or enjoys beer and ghost stories with Bram Stoker in a London pub, or discusses sexuality with the racy novelist Elinor Glyn, or flirts with Billie Burke, the sexy young actress whose later claim to fame was her role as Glinda the Good Witch in The Wizard of Oz. But Twain could be much, much harder on folks like Isabel Lyon, his sassy secretary, or even with his headstrong and often melancholy daughter Clara.

Shelden is a master of the telling detail. He is able to evoke a great deal in just a few lines: there is a certain stark quality to some of these characterizations that often is extremely suggestive. Shelden narrates these episodes colorfully, in well-written prose that is a pleasure to read. Yet underneath it all is a cunning critical sensibility and a deep historical and scholarly expertise. The account of Twain's dying days in Bermuda, and its clever connection with Prospero and The Tempest (a connection that is a tad breezy, and yet compelling) is exemplary of this style. I can imagine raised eyebrows among more staid Twain scholars regarding certain ideas and connections; nevertheless, this is just the sort of scholarship that I find most refreshing. In these and certain other ways, I would compare Shelden to Christopher Benfey, of whose works (especially his masterpiece The Great Wave, about 19th-century Americans encountering Japan, but also including his more "impressionistic" and controversial Summer of Hummingbirds) I am a huge admirer.

Shelden also captures about as well as anyone up to now the complicated personalities of Twain's two surviving daughters of those final years: the sickly, brainy Jean, and the rather arrogant and dark Clara. His account of Twain's famous white suit, with which he begins the story, and which supplies the title, is thorough and convincing; it gives energy to the idea of the old writer beginning anew, casting off the grief that had chained him down for a decade (though of course, the extent to which this rhetorical move succeeded remains open to debate). Among scholars, Shelden is basically alone in suggesting that the so-called Ashcroft-Lyon Manuscript, an unpublished account by Twain of his complex relationship with Isabel Lyon, is richer and more interesting than anyone has believed.