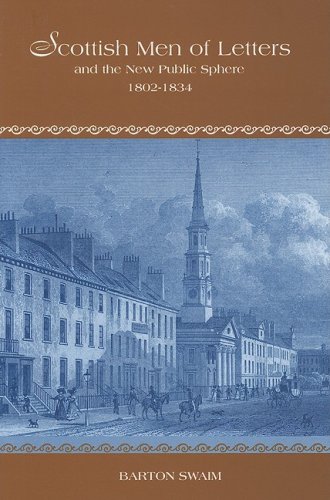 Looking more carefully at Calvinist suspicion of fiction and poetry.

My choice of airplane reading for the long flights to and from Asia recently was Barton Swaim's Scottish Men of Letters and the New Public Sphere, 1802-1834. If I had packed another book in my carry-on I might not have made it through Swaim's book—it is not exactly scintillating reading. But I'm glad that forced myself to stick with it to the end. (Actually, I set page limits along the way and then rewarded myself by watching a movie when I reached a set goal.)

The main focus of the book is a group of writers who contributed to the Edinburgh Review during the three decades after that journal was founded in 1802. Along the way, Swaim makes the case for the superiority of the Scottish over other British literature of the period. What I found especially interesting, though, was the discussion of the role of writing as such in this period.

This was a time when at least some of the public intellectuals in Scotland still took their Calvinism seriously. Many old-style Presbyterians of the day opposed both the reading and writing of fiction and poetry. In 1783, for example, this notice appeared in an Edinburgh newspaper: "Thursday last the question, 'Does reading Novels tend to promote or injure the cause of Virtue?' underwent a discussion of considerable length." While the majority present at the public discussion judged that on balance novel-reading was not detrimental to the life of virtue, a significant minority, fifty-five of the one hundred and twenty in attendance, voted the other way. Nor was it uncommon for Scottish novelists at the time to drop some negative comments about the writing of fiction into their novels—apparently, says Swaim, to suggest "for the benefit of their readers that they were aware of the moral dubiety involved in writing fiction, but that they were determined to redeem the craft."

The reasons for this widespread suspicion of novels and poems were different than I would have guessed, though. The concerns were due, says Swaim, not so much to "ignorance or philistinism" as to a "stridently Calvinist view of labor." For one thing, folks worried that imaginative writing was the kind of thing that drew on "solitude and isolation" rather than social engagement—they were thinking here of the British Romanticists. The kind of person who spent considerable time imagining and constructing fictional and poetic scenarios was like to be someone who disdained the ordinary rhythms of work and sociability, thus fostering a sense of self-importance and a pattern of excessive introspection.

None of this was motivated, then, by a hostility to the fictional as such—just to the kind of mindset that was seen to be prevalent among novelists and poets. Thus, John Galt, a Presbyterian businessman who published regularly, took comfort in the fact that, as he put it in an autobiographical piece, while worrying that "I have written too much, it is some consolation to reflect [that] I left no calling for the idle trade."

Someone asked me recently how I manage to write as much as I do, given my heavy administrative duties. I replied that I have no choice: I write to stay sane, stealing hours here and there, mostly in early mornings and late evenings. I must confess that I do often envy those who write well, and do it with much more leisure than is available to me. Reading the 19th-century Scots, however, makes me feel a little better about my situation. I'm not sure that more time available would make me a better—or even a more productive—writer. More important, I'm not sure it would make me a better person.

Maybe I am using Swaim's account to make a virtue out of what is in fact simply my lot in life. But maybe not. What his narrative does help me see is the importance of thinking about the motives of writing, and how isolated reflection may or may not contribute to the life of discipleship. Too often Christian writers these days are asked how they write, but not why—and what the process of writing does to the formation of character. Those 19th-century Calvinists may not have had it exactly right. But at least they were raising the right questions.

Richard J. Mouw is the president of Fuller Theological Seminary. Among his many books is He Shines in All That's Fair: Culture and Common Grace (Eerdmans).

From the review: "The kind of person who spent considerable time imagining and constructing fictional and poetic scenarios was like to be someone who disdained the ordinary rhythms of work and sociability, thus fostering a sense of self-importance and a pattern of excessive introspection." With little change, perhaps that could also be said, and I wouldn't say it approvingly, of Second Life aficionados and other virtual reality habitues?