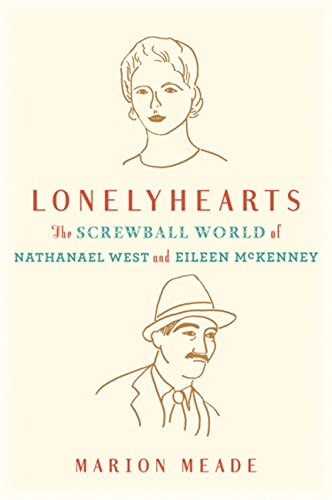 Ah, innocence. For the first 210 pages of Marion Meade's dual biography, Lonelyhearts: The Screwball World of Nathanael West and Eileen McKenney, I fully expected a glimpse at the couple's screwball world. I'd forgotten that the people who choose book titles are only somewhat likely to have read the books. In the case of West and McKenney, the pair knew each other for just a year and half before they collided with a Pontiac in the Imperial Valley on a clear November day (West was a notoriously awful driver). This translates into 392 pages before their first meeting, a quick marriage on page 284, and a tragic end on page 305. Hardly time to unpack the wedding china, let alone create a world.

But it's a tribute to Meade's writing that I liked the world I found better than the one promised by the title. In a Nathanael West novel, the fatal collision would have qualified as a "twisteroo," a cosmic dope-slap in place of happily ever after, as if Prince Charming had swept Snow White onto his horse and then plunged into a sinkhole. West produced some of the darkest comic fiction of the 20th century, and the screwball world of Lonelyhearts is mainly the story of his personal twisteroos. Born Nathan Weinstein in 1903, he spent his childhood in Harlem, then a semi-rural suburb of New York. His parents were Jewish immigrants from Russia who made their money developing properties in the city's boom years. Baffled by their awkward, un-ambitious son, Max and Anna Weinstein dedicated themselves to getting "Natchie" (later "Pep") through private school and into the Ivy League. Pep's idea of a well-spent boyhood was skipping class to read Dostoevsky at the public library, stalking lovers at Central Park, and picking up gonorrhea from ubiquitous streetwalkers; all these elements (along with hefty doses of sadism, literary inside jokes, and potty humor) came together to form his first novel, The Dream Life of Balto Snell. The book didn't sell, but at least he had a steady job and a natty collection of Brooks Brothers suits, courtesy of well-connected relations.

By the early 1930s, Nathan Weinstein was a walking twisteroo. He owed everything to his family; yet he scoffed at the immigrant creed of hard-work-leads-to-prosperity. His own ambition was to be a writer in the Scott Fitzgerald mold, mocking the American myth from a café table on the Left Bank. In pursuit of that dream, he went to France (on his uncle's dime, naturally) and took on a new name that was "short, crisp, and … did not sound Jewish." West's parents didn't mind the name change so much—plenty of immigrants adopted English-sounding surnames—but his early writing dished up a snickering anti-Semitism, among other cruelties. Fortunately for Max and Anna, few people read it.

With his novels Miss Lonelyhearts and Day of the Locust, West continued to write fiction more in the tradition of Rabelais than Dostoevsky. Decades later, in the age of Kurt Vonnegut and Arthur Miller, readers would be ready to appreciate his violent inversions of American optimism. Meade calls it West's "rude message—guess what folks, the American dream is a scam." Still, he had to settle for a living as a screenwriter, socializing with other writers of the Lost Generation (Dorothy Parker, John O'Hara, Fitzgerald) who had ended up in Hollywood. It was among such company that he met Eileen McKenney, a funny, tough girl from Ohio who worked as a secretary at Disney, but who was widely known as the daffy heroine of her sister Ruth's bestseller, My Sister Eileen.

It's tempting to say that two people couldn't have been more different, but we'll probably never know how much Nat and Eileen shared. The real Eileen McKenny remains a fuzzy character; it's Ruth, the sister who created the myth of Eileen, who shows up here and flies the screwball flag for the McKenneys. As a troubled teenager, Ruth tried to hang herself (Eileen found her on the cellar floor); as a young woman she wrote light humor for the New Yorker and turned her Greenwich Village adventures with her sister into the novel that became a long-running Broadway play, a movie, even a television show. Through it all, she kept up her subscription to the Daily Worker and campaigned vigorously for the Communist Party. In fact, to read about both Ruth and Eileen McKenney—all apple pie and Pravda—is to wonder if maybe Joe McCarthy had a point. But no matter, it's all comedy now.

One thing we do know is that Eileen tried to get her new husband interested in politics. West may have gone to a few Party meetings, but he remained too much of a cynic to believe that a revolution, even it came, could turn out well. More likely it would just hand you another twisteroo. While Meade doesn't make West likable, she's written a funny, insightful biography that contains at least one interesting idea: a hopeless cynic may be less dangerous in the long run than the more appealing idealists around him. Just don't let him behind the wheel.