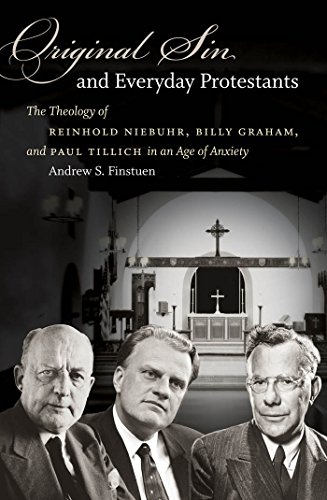 Original Sin and Everyday Protestants: The Theology of Reinhold Niebuhr, Billy Graham, and Paul Tillich in an Age of Anxiety
Andrew S. Finstuen
The University of North Carolina Press, 2009
272 pp., $46.00

Niebuhr, Graham, and Tillich on sin and human limitation.

Andrew Fiunstuen's industrious research in the popular magazines of the postwar decades and the archives of his three principals allows him to draw what seem like outrageous conclusions. Thus, Reinhold Niebuhr was not just a proponent of international realism popular with élite mandarins but also an effective communicator to seminarians and lay audiences on classical Christian themes of sin and grace. Paul Tillich was not just a recondite theological philosopher drifting toward pantheism but also a moving preacher of traditional Protestant doctrines translated into a 20th-century idiom. And Billy Graham was not just a naïve revivalist who could wow a big crowd but also a careful religious thinker of surprising depth and breadth.

The larger picture that Finstuen offers for his surprising conclusions about Graham, Tillich, and Niebuhr is a reading of the late 1940s and 1950s as an era when Americans at many levels, from policymakers in Washington to Sunday school classes in the heartland, wrestled seriously with traditional Christian doctrines of "human limitation, moral ambiguity, and conceptualizations of human sin." Documentation for these conclusions comes from the extraordinary record left by these three notables from unending rounds of speeches, writings, and correspondence. No audience was too humble, no letter seemed too insignificant, for their serious attention. To buttress his case, Finstuen also draws attention to other postwar figures (including Bishop Fulton Sheen, C. S. Lewis, Martin Luther King, Jr., and John Updike) whose main emphases displayed the same preoccupation with original sin and classical Protestant understandings of grace. The book ends, however, on a sad note as Finstuen shows that by the mid-1960s—with the death of Tillich, the semi-retirement of Niebuhr, and the rise of other popular revivalists to share Graham's previously unquestioned leadership among evangelicals—an important transition occurred that moved both academic and lay religious thought beyond a concentration on original sin to matters of more ephemeral importance.