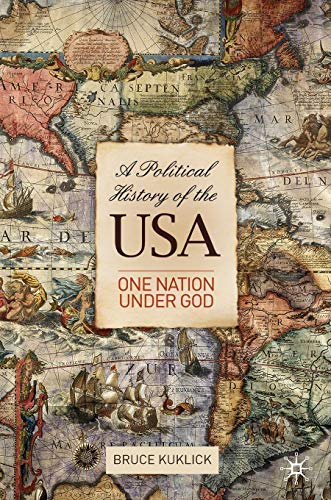 A bold one-author summation of the whole American past.

Bruce Kuklick, who recently retired from a distinguished career at the University of Pennsylvania, has been an invaluable conversation partner for a whole generation of evangelical historians. From his position as someone keenly interested in ultimate questions about God, belief, and religion—yet as not himself a believer—he has challenged, harangued, encouraged, kibitzed, and astutely criticized the works of those who embrace both Christianity and the historical vocation. (Some of that sparkling engagement has appeared in the pages of Books & Culture.)

Now in this refreshingly accessible textbook, Kuklick presents a convincing picture of United States history as always engaged with religious issues, though in a striking variety of ways. While the book does not pretend to be neutrally objective, it bends over backwards to treat controversial developments in the United States' contentious political history as fairly as possible. Partisans looking for quick and dirty trashing (or celebration) of Lyndon Johnson, Ronald Reagan, Bill Clinton, George W. Bush, or Barack Obama (who makes it on to the last page) will be disappointed. Readers looking for a reliable general history—with especially adept handling of the nation's diplomacy, and an eye alert for the ongoing significance of religion—will, by contrast, find exactly what they are seeking. In an era where the fashions of professional historians run to ever more minutely focused research, it takes fortitude to attempt a one-author summation of the whole American past. The very last word in Kuklick's attempt is "ambiguities," which aptly describes many of the episodes and personalities he treats, but not the overall success of this volume.